In PlayStation 5 News this weekend following the recent PS5 Tutorials and latest PS5 Trailer videos, Stevivor via YouTube shared a brief guide on how the PS5 Console Sharing and Offline Play feature works for those who gameshare with a Primary PS4 as the official PS5 Launch Day closes in with only PS5 Online Ordering available to join Sony's next-gen console scene.

Here's to hoping the PlayStation 5 Scene will find some more bypasses / loopholes for sharing installed PS5 PKG games, or perhaps the One Private PS4 Gamesharing Method Remaining will end up working with PS5 also unlike the Authorization Token on PlayStation Network Leaks via PostMessage Function already reported or the code injection exploit (Websites Can Run Arbitrary Code on Machines Running the 'PlayStation Now' Application) if it relies on some undisclosed / unpatched PSN vulnerabilities.

To quote from Stevivor.com: Game sharers, be aware. PS5 Console Sharing and Offline Play is the new name of the system that PlayStation players would think of as the Primary PS4 system, one that's crucial for those game sharing with another friend or family member.

Like the Primary PS4 system before it, you can log into a console and set it as your primary system; anyone else that logs into that specific console will gain entitlements to all the games you’ve purchased. The same is true with PS5 Console Sharing and Offline Play, despite the new name.

To check the feature on your PS5, do the following:
Best yet, you can still have a Primary PS4 set up alongside a PS5 with Console Sharing and Offline Play. 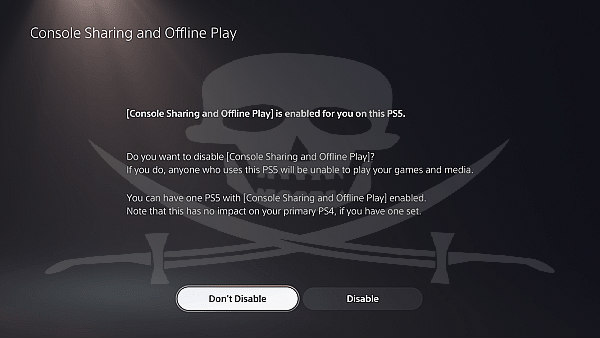 Member
Contributor
Verified
Glad it's not online only.

Member
Contributor
Verified
I'm willing to bet the ps5 will be much like the ps4. The small amount of exclusives won't justify the switch untill 2 or 3 years in, especially with the small ssd and the fact that you can pick up a ps4 pro for half the price if all you want is ps4 games at better speeds