This PS5 News comes following both the PS5FWBot and PS5 Firmware Checker, the latter of which was also updated today to include a PS5 System Software build date and download URL for added convenience.

As always, DON'T UPDATE if you wish to use PS5 game backups and PlayStation 5 homebrew apps, emulators, etc whenever a PS5 Jailbreak Exploit arrives in the PlayStation 5 Scene.

Those experiencing any of the issues noted in the changelog below that plan to update can follow the How to Update the PlayStation 5 System Software / Firmware guide, and below is the PS5 Firmware / System Software 2.26 Update changelog from Sony's official page:

An update to the system software for PlayStation 5 consoles was released on 11/25/2020.

For the best PlayStation experience, always update your PS5 console to the latest version of the system software. By updating, you can enjoy additional features, improved usability and enhanced security.

Update your PS5 console with the latest system software. You can also check out the features that are available in the update here. In addition, you can view the online user’s guide in the PS5 console's Settings menu. 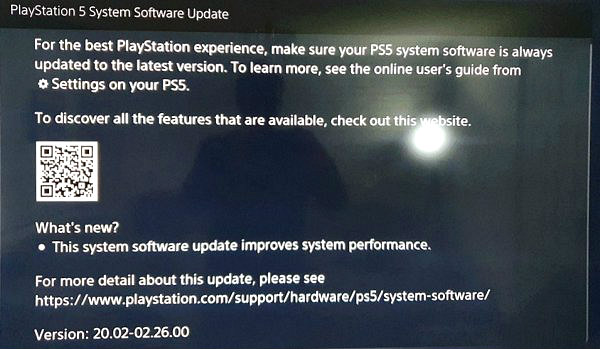 Member
Contributor
So. I have 2 Questions for you guys.
1. If i have my PS5, can I just disable Automatic Updates and play offline?
2. How long is it gonna take for an jailbreak to come out for the ps5?

Senior Member
Contributor
Verified
@n3vio
Yes, all games require an update (game update and not system update since you are going to play offline), You can install the disc update while you offline.

All day one or launch day edition games comes with 1.14 update on it and is require in order to play them. Do not get confuse and do not update your system firmware online.

I forgot to mention that you cant play call of duty cold war offline at all. search before you buy your games discs, also you cant redeem any game disc codes cause you have to be online and of course latest system update needed in order to do that.

Senior Member
Contributor
Nobody really knows how long a jailbreak will take. It could be tomorrow, it could be never.

Realistically, it doesn't make sense to release until there are enough PS5s that everyone who wants one and can afford it gets one. That won't be until the spring of next year at the earliest. To release an exploit earlier than then would keep the possible userbase too small.

After that, it's a question of how good the security is vs. how good the hackers are. I don't think we have seen an exploit within 1-2 years for recent console generations. The PS5 security seems very similar to the PS4, so following what happened last generation, I'm guessing an exloit for a ~2 year old firmware will be released every 2-3 years. Or it could be like the Xbox One and never be hacked at all.

However, if there is an unpatchable hardware exploit like the Switch, it could be permanently hacked within a year or two. Given that the PS4 never had this kind of hack and the PS5 is an overclocked PS4, I highly doubt they would have introduced such an exploit.

So my verdict - it's probably worth updating to have working USB ports and games not spontaneously delete themselves. Modding has become a hobby, not a way to save money by backing up. To fully enjoy this generation, you need two PS5s, one to play, one to update only when an exploit happens. If you keep a PS5 on launch firmware, it is going to effectivly do nothing the whole generation the way an un-updated launch PS4 did.

Once an exploit is eventually released, the games you can actually play on said ancient firmware will all be bargain bin anyways and the cost of the second PS5 will be higher than just buying them. And of course you can't actually play legit copies of the bargain bin games either because that would require a firmware update...

Senior Member
Contributor
Verified
I understand that people can be very enthusiastic about jailbreak, but come on, putting yourself through the hassle of paying 500$ and not even being able to go online or enjoy the newest games, for something that could very well never happen, it's just crazy imo.

I reckon I'll be better off updating my PS5 and enjoying myself, and stop updating only once I see news about jailbreak. I mean if there's ever gonna be a jailbreak, it ain't gonna be on the first ever firmware, is it?

Senior Member
Contributor
Verified
If by some small chance there was already a exploit in the making, it wouldn't be released until after it was patched, which could take many months or a year or more.

Also the bounty program will play a big role in all this im sure.

Senior Member
Contributor
I think i might give up on modding this generation ive had my time with some great scenes over the years when i was younger. The 360, wii, ps3, psp, ps2 and the ps4 but the ps4 was the worst scene to be totally honest. No disrespect to any devs for their incredible work but the homebrew and support just didnt seem to be there. And i still had to have a 2nd ps4 anyway and still buy the latest releases to play which was never the case with any other system.

I think the time has come now where i should just have a legit system, update and play the games i want to play. It's just not the same now anyway now that im in my mid 20s but hey thats life i guess lol