The PlayStation 5 was released on November 12th 2020. While it's similar to the PS4 in it's architecture, the security model is vastly improved on both kernel and userland fronts. Below is some key system information on system software and some of the changes from the last generation.
Userland Overview

Back in September Project Zero released a report for what they believed to be CVE-2021-30858, this turned out to be wrong as it was actually CVE-2021-30889 they were describing. A proof of concept was written for PS4 by sleirsgoevy, which we later modified to gain ROP execution on 9.00 for the kernel exploit. The vulnerability won't be covered here, this writeup will focus on taking the arbitrary read/write and leakobj()/fakeobj() primitives the exploit provides to gain code execution on PS5.

Lower firmwares such as 2.00 don't seem to be vulnerable, likely because the relevant FontFace code isn't present in older builds of WebKit (this holds true on PS4 as well, as firmwares lower than 9.00 can't be exploited with this WebKit bug).

Firmware 4.03 however, we found the browser was vulnerable. Unfortunately the exploit strategy used on PS4 could not be used on PS5 because of clang-based CFI. On PS4, we can use the leakobj() and arbitrary write primitive to leak an HTMLTextArea's vtable and smash one the various virtual calls for code execution. On PS5, these virtual calls are verified.

Virtual calls now have code that looks something like this, where it's address is enforced: 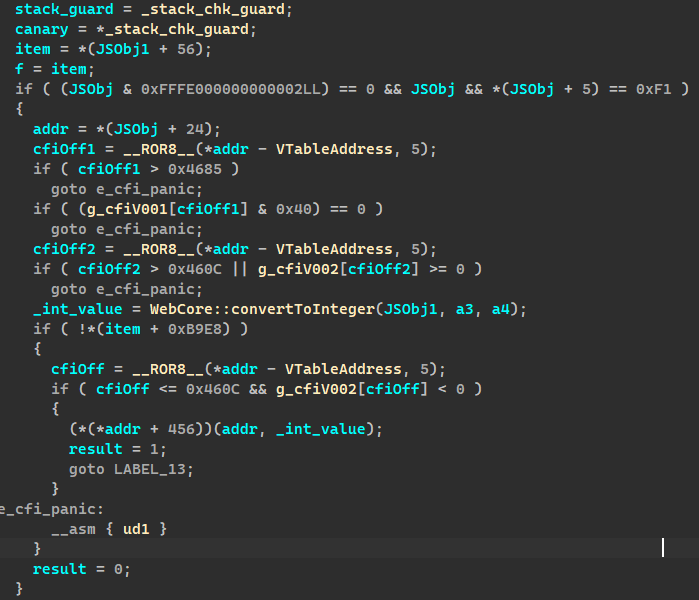 An alternative was needed to achieve code execution in WebKit. Thankfully, PS5's CFI is only forward-edge and does not use shadow stack, so backward-edge attacks (such as attacking return addresses on the stack) are fair game. Javascript provides a somewhat interesting piece of functionality called Web Workers. These Workers are at their core simple threads which execute javascript in an isolated environment. These were useful for exploitation, as they had a reliable stack we could leak, and gives a thread to pivot to our ROP chain.

The libkernel library used by WebKit (and many other applications) keeps a list of threads for that process, and includes information such as the stack address and size. By iterating this list using the arbitrary read/write, we can find a worker's stack address.

Once we have a worker stack, we can smash a known return address on the stack to stack pivot and get ROP running. Due to the stack being deterministic, we can setup a dummy worker with a postMessage handler and overwrite the return address at stack+0x7FB88.

Gaining userland code execution on PS5 is trickier than on PS4, but it's possible. Of course, this was made easier by the fact that we have binaries* and thus access to ROP gadgets. Otherwise, achieving code execution would have been far more difficult due to XOM. This is a userland exploit. Attacking the kernel is much more difficult due to above mitigations, and is left for a future writeup.

Those who would like to support continued development work from Znullptr (aka dmiller423) may do so via BTC Donations, GoFundMe, becoming a Github Sponsor or Patreon.

TL;DR: From @SpecterDev on Twitter, to quote: "Was hoping to get exfat bug working but the exploit scenario on PS5 is much tougher than PS4. Might still be possible to find a way but a lot of work will need to be put into finding a viable path. But at least the userland portion is out there so it can be attempted/tested "

And from Znullptr, to quote: "NO - DO NOT UPDATE This is NOT a kernel+hv exploit, this was the firmware version we had available vulnerable to the webkit bug. There are no guarantees kernel or hv exploits in the future will be for > 4.03. It's NOT worth updating !"

Cheers to blood88 for the heads-up on this earlier today!

Member
Contributor
i have buy me a xBox Serie S , for Gamer we dont can do anything without a xBox. CoD Games in future only die Xbox i thing, Bethesda is now in Microsoft hands and that is the first time where i have buy a xBox and with Game-Pass it is realy a good Deal.

Next step is a ps5 inthing but i thing the devs better hold the exploit and look If the ps5 is for all peoples to buy. At this moment in germany the most dont have a ps5 and Sony will Close exploit fast. If Sony close the exploit without no big talk about this exploit then they can release it.

Member
Contributor
Verified
@MoneyT20 Don't forget PS2 and PS3 emulators too plus many more. If Sony won't do it, the homebrew community will

Member
Contributor
Verified
If we get K exploit on PS5, it will probably be the greatest mod-able console ever. Period. I get excited just thinking about it...

Member
Contributor
@wolfsstolz this is already patched in 4.50.

I got already 4x ps5 in Germany. the last one that I got on Amazon was with horizon forbidden west

Use radarbot for telegram and get one ps5.. my family is now full with ps5.

Member
Contributor
Well, honestly I kind of feel bad for $ony. Two years after the ps5 releases and already hacked... I just find it funny is all

Senior Member
Contributor
Well, it's not yet fully hacked @EeveesFwuff

Senior Member
Contributor
@simbar in Poland no problem to buy. The problem is the price

@olsztyn41 this radarbot scans Polish clubs or what?