In case someone is interested, after PSJoy which I've released one year ago and following my RemotePlayPrototype open source research project I have developed a new Android app called PSPlay.

PSPlay offers you the possibility to remote control your PS4 without limitations. You can play your favorite games remotely while you are away*. PSPlay is optimized to provide streaming experience with lowest latency possible.

It's also a 3rd Party Remote Play client which supports 3rd Party controllers mobile data connections, multiple PS4 profiles and PS4 firmware from 5.05 to 7.00. A PC is of course not required anymore, you can check it out here:

There will be a special offer for the alpha test of PSPlay which starts tomorrow. Similar to REPL4Y, the app will be available for free for one week. Any feedback or suggestions for improvements are welcome.

A detailed tutorial will be published on my YouTube Channel soon as well as an introduction video. In the meantime you can have a look at the help website of PSPlay in case you have some questions.

*Please note: if you want to play over the Internet when you are not at home you have to configure port forwarding on your router. Otherwise, playing remotely will not work when you are not connected to your network at home. 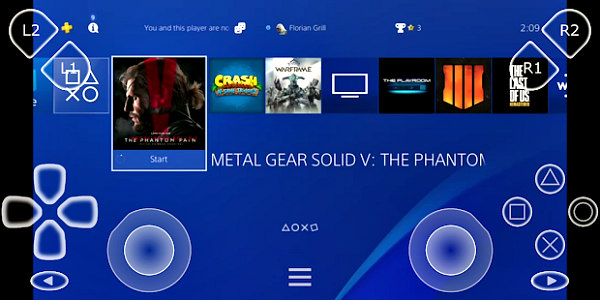 Member
Contributor
Verified
I have a few tips and questions. First , make sure that your router is set to Wireless N , or Wireless AC. The password type should be WPA 2 AES type (numbers and letters). If you use WEP (only numbers) you will not be able to use Wireless N , and that will reduce your speed and experience with remote play. Second , make sure you close all phone apps before launching PSPlay

Now to the questions .. Does the HEN and REN versions matter ? I am using the latest on ithaqua , but they are not the latest released. And is there a similar app for PC where you can use your mouse and keyboard ?

Developer
Senior Member
Contributor
@arcadekidflo thanks for the information.

PSPlay can be used on any PS4 with at least firmware 5.05 or newer. So the Hen and Ren version should not matter. PSPlay doesn't work on PCs, however there are some tools available which let you forward mouse and keyboard buttons to the official PS4 Remote Play program.

Member
Contributor
Verified
Ok, this is epic, def worth a try!

Developer
Senior Member
Contributor
@soggyburrito thanks for your feedback

For anyone looking for a way to use your smartphone as Dualshock controller. I've released a free app called PSPad. As it was the original intention to create an app which can be used as additional Dualshock controller I've decided to publish this app for free.

This app is specially designed for users who need a second Dualshock gamepad to play multiplayer games or need a quick replacement for their broken PS4 controllers.

The main features of PSPad are:
Because of a hardware limitation on many Android devices it is strongly recommended to connect a gamepad to PSPad via USB instead of Bluetooth (to avoid Bluetooth lags). I've made a short demonstration video about the features of PSPad which you can find here:

PSPad demonstration video
PSPad is establishing a connection to your PS4 via the Remote Play protocol. This has some limitations which you have to keep in mind:
For everyone who is wondering, all features of PSPad are already in included in PSPlay. The difference between these two apps is that PSPlay is a full remote play client and PSPad can just be used as controller, so not streaming is possible with PSPad.

Thanks to all for supporting me and for using my apps.

UPDATE:
PS4 firmware 7.50 is out and everything is still working as expected with PSPlay.

Member
Contributor
Best app I’ve ever bought! Delighted to not have to lug the PlayStation around the hiuse with me all the time now.

Just one question, would love to get the app going on my FireTV2. Got as far as installing it from Google Play but it tells me "this app is not licensed" once I start it up. Any suggestions, or plans to get it running on that?

Developer
Senior Member
Contributor
@elsparko many thanks for your support and your feedback. I really appreciate that

PSPlay can only be installed via the official Google Play Store, sideloading will not work. It should work if you are able to install the Play Store on the Amazon fire TV stick but I have never tried that to be honest. I might publish PSPlay on the Amazon App store as well at a later point. Currently I'm working on the next update which will include microphone support (hopefully).

Tested on Party Chat and with Voice Commands. Feedback once it is available is highly appreciated.

Developer
Senior Member
Contributor
@denis688
No only Android support at the moment.
Yes PSPlay supports every firmware from 5.05 to 7.51.

Member
Contributor
Verified
Hello everyone, my psvita is asking me for update before it could register with my ps4