Following the Rebug 4.78.2 PS3 CFW update, today @evilsperm announced the release of their Rebug Toolbox Source Code with details below.

Download: Rebug Toolbox Source Code / GIT
To quote: This all started 6 years ago when the PS3 was finally cracked. At first we had the PSgroove dongles.

I (evilsperm) contacted Cyberskunk and a new friendship was born. We worked to bring debug settings to the dongles at the time.

Yes we succeeded (and pissed off lots of other devs because they couldnt pir8 off devnet anymore).

Than we were graced by the likes of Fail 0ver Flow, Geohot, Grafchokolo/glevand, and the entire PS3DEV team (the list is long).

After F0F released the first 1/2 of the keys to the kingdom Geohot stepped in and put the last piece of the puzzle together, and here we are today SIX YEAR LATER! (amazing how time goes by so fast)

After we had the ability to create custom firmware Cyberskunk and myself decided it was time to start creating the end all be all of custom firmware’s for the PS3. I think we have, and judging by the 1,000,000 + users of Rebug over the years I would say all of you think the same as well

Rebug has and always will be focused around the Rebug toolbox and DEX. We came up with the idea when we were working on the dongles at the very start of the PS3 scene explosion. We had plenty of help along the way to get things perfect, we also need to thank DeanK for the source to multiman and his help in creating the gui for the toolbox. Our first gui without DeanK was amazing ugly but functional

We now have Joonie and Habib working with us on Rebug. These guys are super talented and we are happy to have them on the Rebug Team. Without these 2 Rebug would be no more. Cuberskunk has moved on and is trying to start a family, and I have been extremely busy, with work and kids. On top of that we had lost the final source code to the toolbox due to a server failure, and I had a very old backup that we were able to work with after Joonie and Habib got their hands on the source. They were able to tweak it even further and make it what it is today!

So Today we release the source to the masses. Maybe this will get more devs interested in the PS3 again because the PS3’s EOL is far from over. Hopefully we can make this a more open community to build upon. We will also be releasing all of our tools we use to build rebug in the coming weeks, so keep checking the site, twitter, facebook, all the forums, youtube or however you get your rebug fix

Sorry were not sorry for releasing this a long time ago

These are some very talented developers so please show them the same respect you have shown us over the years.

graf_chokolo (as always) and The Three Musketeers for the work they have done in the past and (hopefully) future.

#casabonita –– Where all the cool stuff being developed! the hometown of mysis and his minions!

flat_z – Helping with the OtherOS testing and well... You know what you did..

We will be pushing this code to github.com/evilsperm in the next day or so as well. You can post all the questions you want there, we will not answer you by contacting us through email as our inbox get flooded with questions all the time. 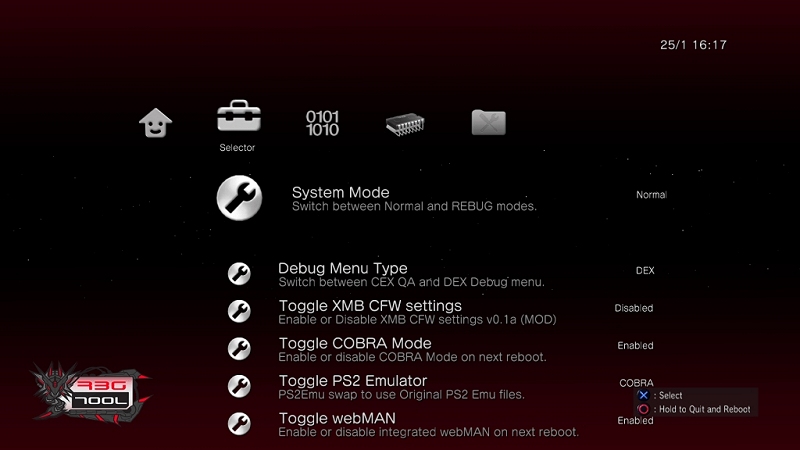 Contributor
i have to give a special thank you to the rebug team ive always enjoyed there work since the very beginning when this all started and hope to see more work from them in the future. thx u

Senior Member
Contributor
Verified
Why did they release the source code? I think their focus is turning to PS4, as they are who they are. You can't just put this craft down and walk away so easily. There is always that burning feeling that keeps you coming back for more, or the next challenge anyways. We'll see a return I'm sure...#RebugPS4

I mean if I was releasing a CFW I'd wait until after Sony's VR comes out. Wouldn't you at least want to grab that in your CFW? There could be all kinds of great PS4 Homebrew apps/tools/games used with devs having that platform to work/tinker on.

Linux/Homebrew VR = Awesome...hasn't ever been done so who knows what's possible, but I think we'll get there.

GritNGrind said:
Why did they release the source code? I think their focus is turning to PS4, as they are who they are.
Click to expand...

Agreed, PS4 is next

Developer
Senior Member
Contributor
@GritNGrind the moment you can identify the true reason what keeps a developer coming back for more , which is what you just demonstrated just now you have a pure heart coming into this wether you are a end user or someone who also wants to learn.