In the footsteps of Resident Evil 2 on PS4 comes Capcom's return to Raccoon City in Resident Evil 3 arriving on PlayStation 4 next April 3rd, 2020!

Here are some RE3 PS4 screenshots alongside the Resident Evil 3 announcement PS4 trailer video from yesterday's PlayStation State of Play 2019 with additional details by Producer Peter Fabiano below, to quote:

Survival horror fans need no introduction to this true PlayStation classic, and for those who have never seen Jill Valentine’s desperate escape from Raccoon City but played Resident Evil 2 earlier this year, you’re in for one terrifying treat.

If you thought RE2’s Tyrant was frightening, you’re in for a whole new kind of fear when the relentless Nemesis drops in with only one mission: to ensure Jill Valentine never sees daylight again.

Taking place a few months after the original Resident Evil ends, Resident Evil 3 takes place both before and after the events of Resident Evil 2. While Leon and Claire’s stories occur after the city has already been infected for some time, Jill’s story provides a new perspective.

Starting with the early days of the outbreak, you’ll follow Jill’s fight for survival as the population of the once-lively metropolis turns into hordes of undead.

Despite providing a thorough report on the Umbrella Corporation and the incident at the Arklay Mansion a few months prior, Jill’s investigation has largely been swept under the rug. Even though she’s been suspended from the police force, Jill is still on a mission to bring the truth to light.

To do that, however, she first has to escape with her life and her investigation in tow. Setting out to put the wreckage of the city behind her once and for all, Jill runs headlong into one giant problem that all of her training and her harrowing experiences in the Arklay Mountains couldn’t prepare her for...

An Ordinary Day in Raccoon City

Nemesis. Those of you who have played the original Resident Evil 3 remember this monstrosity on a mission, and Jill is the last-standing fixation of its relentless pursuit. A variation of the Bio Organic Weapon (B.O.W.) series that the infamous Tyrant (who you may know as “Mr. X”) hails from, Nemesis has one purpose, and one purpose only. It exists to prevent the truth of Umbrella’s experiments from getting out, by exterminating any traces of the S.T.A.R.S. team.

Further complicating things is that Umbrella Biohazard Countermeasure Service (U.B.C.S.), Umbrella’s private military force, has been dispatched into the city to rescue any remaining civilians – at least, that’s their purpose according to one of its members, Carlos Oliveira.

Between Jill and Carlos, you’ll get a new perspective of the doomed city and revisit iconic locales that were first featured in Resident Evil 2. You’ll need to keep your wits about you, though; the shambling hordes of the undead aren’t the only things out to get you. You never know when you might hear that iconic, low rumble... “STARRRRRRSSSSS...”

A City Controlled by Umbrella

A big part of the original Resident Evil 3 was the introduction of a constant pursuer in Nemesis. You could never be quite sure where he’d pop up next, and if you did encounter him, you had another problem on your hands: He could follow you from one area to the next.

Sounds just like a certain fedora-wearing, boot-stomping creature from earlier this year, doesn’t it? Nemesis, as something of an “upgrade” to the line of Bio Organic Weapons (B.O.W.s) that Tyrant hails from, was also a bit more intelligent and capable using weapons – even those who haven’t played the original game likely know he’s fond of rocket launchers.

Alongside Nemesis, the original Resident Evil 3 introduced a number of new features, including a unique dodge mechanic that, with just the right timing, could let you get out of the way of nearly any attack, and cutting-edge polygonal graphics mixed with fixed camera angles to create a sense of dread. You never knew what was around the next corner, just a camera cut away.

Of course, bringing a classic game into the present day means improved tech and modern flourishes. Resident Evil 3 follows its predecessor by swinging the camera over Jill’s shoulder to put you dead-center in the horror that’s unfolding all around, while cutting-edge photogrammetry is used to scan in actors and create true-to-life performances – that includes scanning in real people for the zombies, too!

The undead certainly never looked so life-like. Just like with Resident Evil 2 and Resident Evil 7 biohazard before it, you can expect heightened horror and plenty of terrifying encounters among the city streets.

As part of today’s reveal, we’ve also lifted the veil on two new Survivors: Becca, a local Park Ranger and skilled markswoman, and Martin, a mechanic who’s got a knack for machines and technology. They’ll be joining Samuel, January, Valerie, and Tyrone in their bid to escape from the clutches of Annette Birkin, one of multiple Masterminds with an array of traps and monsters at their disposal.

You may have seen Daniel Fabron and his ability to control the Tyrant during the open beta for Project Resistance, but Annette has a different monster to unleash – William Birkin, mutated by the G-exploit.

Keep an eye out for more info on Resident Evil Resistance in the coming months!

Get ready for a return trip to Raccoon City when Resident Evil 3 launches on April 3rd, 2020! If you’re the type who’s already packing your bags and always, always brings a souvenir back from your trip, we’ve got something special for you: the Resident Evil 3 Collector’s Edition, available for purchase in North America!

Complete with an incredibly detailed Jill Valentine statue, you’ll definitely want to get your hands on this Collector’s Edition before it’s sold out. A digital soundtrack, art book, and reversible poster are also included, all packaged up in a familiar item box. Perfect for fans who are looking to display their Resident Evil collection in style! 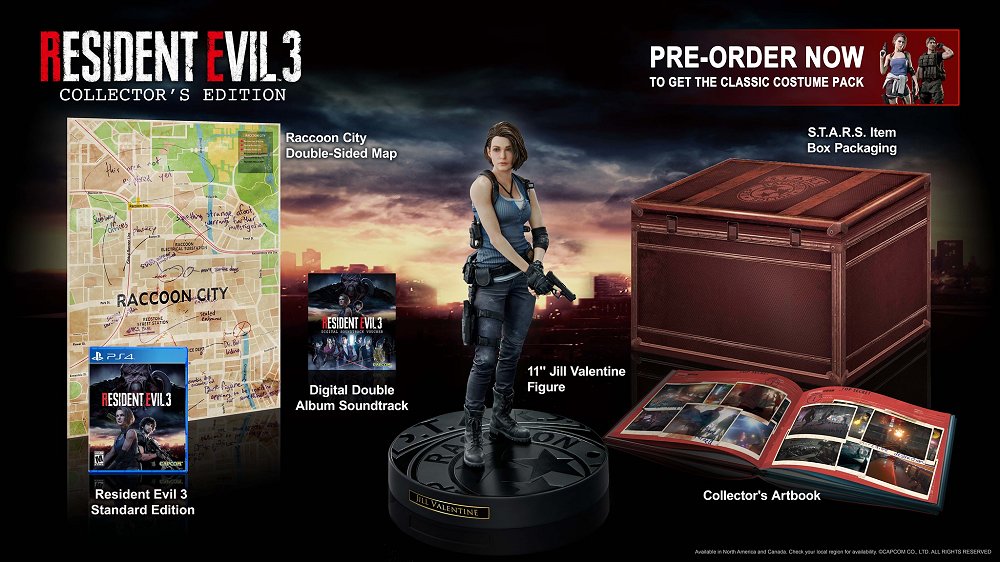 As an added bonus, all pre-orders of the Standard or Collector’s Edition will include the Classic Costume Pack, which features costumes inspired by Jill and Carlos’ appearances from the original Resident Evil 3! (Please check with your retailer to confirm they’ll have this pre-order bonus available.)

With the acclaimed RE Engine bringing the city back to life, both veteran fans and series newcomers will get to return to Raccoon City once again when Resident Evil 3 launches on PS4 April 3rd, 2020. 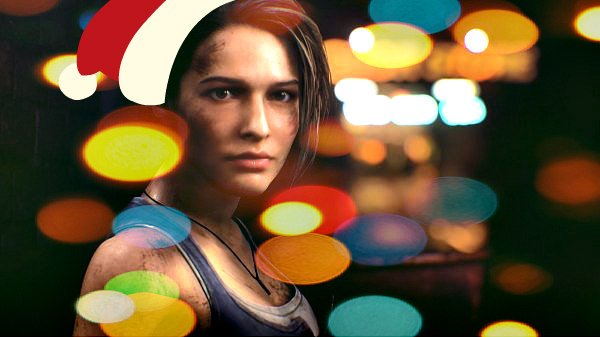 Senior Member
Contributor
This is the best news ever... I LOVE this game since its premiere in 99'.

First I had it in Japanese, it was crazy times.