While there are no video game ROMs included for legal reasons, inside the archive above are PlayStation 4 homebrew packages for RetroArch_2048_(PS2).pkg, RetroArch_NES.pkg and Rom_NES_Installer.pkg with additional details below.

To quote from his blog post on Logic-Sunrise.com, roughly translated: PS4 RetroArch PS2 (2048 and QuickNES) on PS4

There is little Libretro Team published 2 cores (2048 and quickNES) for PS2, they allow to enjoy 2048, a video game type puzzle designed in March 2014 by the Italian independent developer Gabriele Cirulli and quickNES, a NES emulator.

After this publication I had fun testing these 2 cores on PS4 and it turned out that they are both functional thanks to the PS2 emulator PS4.

We all know that the team Libretro is working right now on RetroArch for PS4, that's why I did not want to publish these 2 cores PS2 adapted for PS4, but after several requests on Twitter and by PM, I decided to finally make public.

I still specify that these 2 cores will be very quickly obsolete (not to say that they are already) between 2048 which has no interest for me and quickNES which is only a PS2 version while an emulator Native NES for PS4 already exists, so I did not see the need to publish these versions PS2, finally if it can please...

How to create your FPKG with your ROMs:

This is very important otherwise you will have a save error and your ROMs will be erased when launching the emulator.

Installation tutorial (only to be done once):

This is only to be done once... once your ROMs copied, no need to do it again.

Update: For those following, here's a PS2 Save Injection Method for PS4 by OKITASCK0 (Add @@||*^$generichide to your filter list to block ads) as well:

Before start reading please be aware that I'm Italian and my English is not very good and I'm not good to make and edit video! I hope to see my method on PSXHAX dashboard!

What do you need:
If your savedata have other format like .max or .ps2 you need to extract save files with THIS, THIS or THIS software!

1. Extract in a folder Disc01.iso from PS4-PS2-ELF_Load with an archive extractor.
2. Open CDGenPS2 and put the file from the disc01 folder in the blank space.
3. Now open the folder with PS2 save files and put the files only (not the folder) in blank space. Make sure the LBA of the disc01 files did not changed.
4. Now click on IMG and save the new image to ISO.
5. Open PS4 PS2 Classics GUI, select the game you want to convert in PKG and create your PKG. Remember the Title ID that you're using!
6. Now re-open PS4 PS2 Classics GUI, select the ISO generated with CDGenPS2, use the same Title ID of the game and start PKG creation.
7. Now copy your PKGs on your USB. You must install everything with USB, this method doesn't work with remote installer.
8. Install the game first, launch it and create a new savedata. Exit the game and install the other PKG. The system will tell you that the content is already installed, keep going and press yes.
9. Now open the package installed, go in mc0: and you will find the folder with game savedata, open the folder, mark the files and delete them.
10. (Before start from here, I recommend to follow the guide from the fix first point, the most part of the games have the savedata corrupted problem!)
11. Go to CDFS: folder, mark the savegame files and copy them into the mc0: savegame folder.
12. Now exit, re-install the game (press YES when the message will show up) and enjoy your game with your own savedata!

1. Follow all steps from 1-10, but when you paste savedata in mc0: folder use MCPASTE.
2. Now automatically the files pasted are capitalized, rename them (extension tool) in lower case (you should look at the names of the files on your PC and proceed with renaming).
3. Problem fixed!

Video Tutorial:
SaveData Fix Method Video:
Cheers to PARADOX39989 on Twitter for the heads-up on this guide! 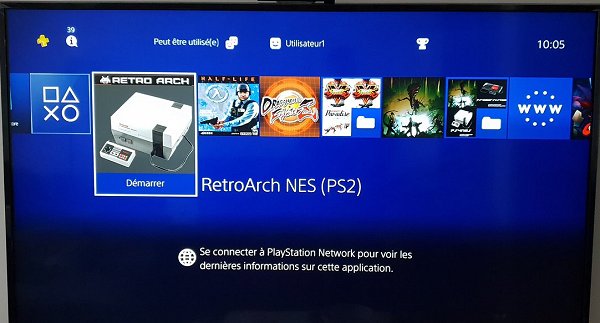 Senior Member
Contributor
Verified
thx for sharing - for me personally a little new stuff to work and test on my ps4 until retroarch will be released.

Developer
Senior Member
Contributor
CDGenPS2 v2 not 3:
I have the same one as link posted
Requires iso buster.

Staff Member
Moderator
Contributor
Verified
Added to the OP now, thanks for the heads-up!

Senior Member
Contributor
Is it possible to play PSX games with LaunchELF and POPSTARTER.ELF ?? Like on PS2 !!
Do you remember ??

Developer
Senior Member
Contributor
According to the system yes it could as long as the core is there in retroarch and is utilized otherwise no.

And please work on some snes emulater

Developer
Senior Member
Contributor
Verified
uLaunch is limited to maybe around 2048 items displayable in the browser and each MC0/MC1 is limited to 8MB storage for roms, so for now if you use the full 2689 romset you wont see past S, and theres no way to add all roms to the 16mb of storage.
You must log in or register to reply here.
Share:
Facebook Twitter Reddit Email Link
Recent Articles
PS4 PKG Information on PlayStation 4 Packages and Keys via Maxton
Proceeding Flat_z's Write-up, the PS4 Backporting Method Outline and his recent PKGEditor Updates, PlayStation 4 developer maxton shared on Github some handy Package information including details...
Kingdom Hearts III Re Mind Joins New PS4 Game Releases Next Week
Joining the latest PlayStation 4 video game releases next week is Kingdom Hearts III Re Mind allowing fans to experience the other tale that unfolded before the final battle complete with PS4...
Built-in Microphone Rumored for DualShock 5 Controller Hints Sony Patent
We've heard rumors of PS5 AI Voice Assistance via PlayStation Assistant for PlayStation 5 before, and the latest Sony patent discovery suggests a built-in microphone may be slated for the upcoming...
Blu-Play DOOM I Port by Sleirsgoevy, Homebrew Games with C / C++
Following the second PS4 Blu-Play homebrew release The UFO Game! from LuBlu Entertainment, developer sleirsgoevy demonstrates that you can create Blu-ray Disc Java homebrew with C or C++ using...