A word of warning: the tools used to build DLC for Rock Band 4 are still unfinished, so keep in mind that errors and bugs may abound. Until this changes consider this a BETA/PRERELEASE. Please report all the issues you run into either in this thread or on GitHub!

1. Prerequisites
2. Before You Begin

The first thing that you must do is set up HEN on your PS4. There are many guides online on how to do this, but the general idea is that you visit a webpage, either in the web browser or by redirecting the user manual, and the webpage automatically jailbreaks your system and sets up a Homebrew ENabler (HEN). This is what allows you to install custom PKGs that the PS4 will accept as DLC.

Songs on Rock Band 4 use a number of new file formats which differ significantly from Rock Band 3 and prior games. Notably, rather than using a MIDI file for the chart, a new "RBMid" format is used which is a sort of pre-compiled chart. For this reason, I have been working on a project called LibForge which is software for converting RB3 format songs to RB4. It is written in C# so it will run on Windows natively or on Mac/Linux with Mono.
LibForge is still considered beta software, and the conversions will not be perfect. Because the new file formats have been reverse engineered by essentially educated guessing, not everything is perfect. Notably, animations are currently not working and there are some bugs related to vocal harmonies. Guitar, Bass, and Drum tracks, as well as Solo Vocals should be mostly working, however. As more people test and report issues, the quality will improve.

The recommended way to go about converting CONs to PKGs for the PS4 is by using ForgeToolGUI.exe. Extract all the files from the LibForge zip from here into a directory of your choosing, and open ForgeToolGUI (it's the one with the little anvil icon). From there, just hit "Tools" -> "Convert CON to PKG" and follow the steps there: 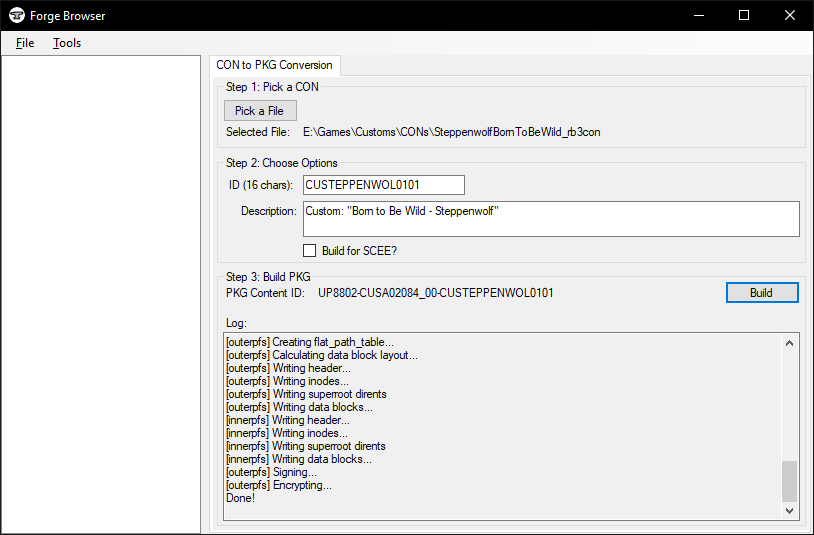 It will fill in a default ID and description for you, which you can change as long as the ID remains all-caps and 16 characters long. You can also check the "Build for SCEE" checkbox if you are using a European/SCEE version of RB4.

Using ForgeTool (Advanced / Batch Use Only)

If you prefer using the terminal or want to write a batch script, ForgeTool is a command-line program that has a very convenient feature: converting from CONs to PKGs in a single step. The following command will convert a single CON to PKG:

Code:
You should replace "C:\Customs\CONs\Song_rb3con" with the path to the CON file you'd like to convert, and "C:\Customs\PKGs" with the folder you'd like to put the PKG into. ForgeTool will automagically convert all the files for you and build a PS4 PKG into that folder.

There are some other options you can use with ForgeTool which I'll detail here:

If you are using an SCEE (European) version of RB4, add the --scee option:

Code:
If you want to customise the PKG name, add the --id option (the ID must be 16 characters long)

Code:
If you want to customise the PKG title as displayed on the PS4, add the --desc option:

Code:
You can use any combination of these 3 options, just make sure they are after "con2pkg" and before the CON filename.

Finally, if you provide a folder full of CONs rather than a single CON, it will create a single PKG with multiple songs in it. In this case, you must provide the --id and --desc options.

Copy your PKG files over to a USB drive, plug it into your PS4, and go to "Settings" -> "☆Debug Settings" -> "Game" -> "Package Installer" and select the .pkg. Then you should be able to start up RB4 and play it!

That's all for now, work is still ongoing to make this process more user-friendly and error-free. Please report your successes and failures here. 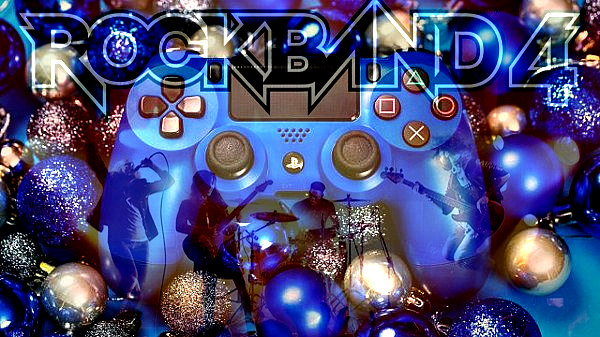 Member
Contributor
Verified
Any chance of that link, please, @mbsurfer

Member
Contributor
Verified
@knightrider19 @xzzmajorxzz @PatchyFog Sorry for the late reply, but attached is the build that is built from source on 12/23.

Member
Contributor
Verified
Thanks @mbsurfer much appreciated. And thanks to the late Maxton for his amazing work on this

Member
Contributor
I made a tutorial if y’all are interested. This is the method I use. Hope this is helpful!

TUTORIAL - How to Create RB4 Customs