Competitor Micron also announced this week their c200 1TB MicroSD card will be available in Q2 2019, although they haven't confirmed exact pricing just yet.

Back in January at CES 2019 manufacturer Lexar unveiled their 1TB Lexar Professional 633x SDXC UHS-I card which is available now for an MSRP of $499.99.

Personally I'll be going with the SanDisk when I get a mobile device that supports 1TB, as my current smartphone has a limitation of only 128GB on the MicroSD card external storage capacity... however, by that time many smartphones may include 1TB Embedded Universal Flash Storage rendering MicroSD cards antiquated in general.

For those who missed it, this will be the culmination of my quest which started with KODI, migrated (briefly) to Mobdro and currently resides with utilizing Free Online Streaming Sites to grab my favorite movies and TV shows to watch without a WiFi connection, without paying for services such as Amazon Prime, Netflix or Hulu and without carrying around a Western Digital EasyStore or Passport... minimalism FTW! 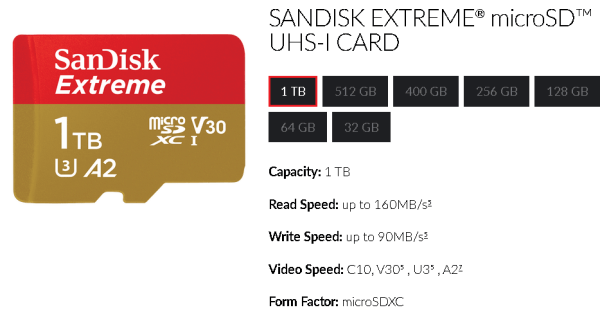 Staff Member
Moderator
Contributor
Verified
Thus far I've got about 90% of the shows / movies I enjoy in a decent quality .mp4 format that total around 737GB, so with 1TB I'll easily be able to complete my collection to watch on-the-go anywhere for free and forever... no DRM, no paid 'services' that remove the old stuff I watch (like when Netflix removed The Wonder Years, for example) to make room for newer junk content, etc.

Senior Member
Contributor
You gotta be kidding me considering using a $500 microsd for a handheld, even worse to swap out kodi media. Flash cards have limited write cycles as is. And probably people would immediatly also think of loading tons of emulator roms on as well. I recently killed a 256 gig microsd on my switch by thrashing it to pieces with retroarch within a month.

Terrible terrible goal using that expensive card for any of this use. Try to think more like legitimate console users where Less is More, Quality over Quantity. You'll appreciate titles more that way .. you just gonna end up with $500 thrown in the trash and depressed that you don't want to play anything and just find yourself trying to get happy at browsing through all that boxart covers.

Member
Contributor
Verified
that is exactly what i do with my PS4... go through the boxart covers feeling depressed that i dont want to play any of the games i have... just not excited for any title except very few of them...