Category PS4 CFW and Hacks       Thread starter PSXHAX       Start date Nov 30, 2019 at 2:23 AM       12,586       14
Following the initial news from @harryoke on Save Wizard for PS4 MAX alongside a PS4 Save Wizard Tutorial and updated PS4 Save Wizard Guide, the PS4SaveWizard Team just announced their next generation of cheat software called Save Wizard.online: PS4 Edition.

For those who don't mind forking out $49.99 for PlayStation 4 game save cheats, their latest product includes the ability to view save information as shown on the PS4... but compared to the Save Wizard for PS4 MAX costing $59.99 Profiles drop from 3 down to 1, there is No Advanced Mode, No User-Entered Cheats and a Modern Browser is Required versus running on Windows 7+, macOS or Linux. Does saving $10 justify losing those things?

Currently there are approximately 41,220 cheats covered spanning 832 PS4 games, and below are additional details from the Save Wizard Online: PS4 Edition site to quote:

Introducing Save Wizard.online: PS4 Edition, our next generation of cheat software!

Based on the technology behind the original and best selling PlayStation 4 cheat software, Save Wizard.online: PS4 Edition gives you instant access to the same quality cheats and library of games as its sister product.

You too can now enjoy cheats for hundreds of games such as Max Gold Keys for Borderland 3, Sekiro: Shadows Die Twice with Max Stats or the classic GTA V with Max Money all from within a modern web browser such as Chrome or Firefox.

Compatible with any region or model of PlayStation 4 or PlayStation 4 Pro using System Software 7.00 or below, Save Wizard.online: PS4 Edition offers you the ability to add cheats to your very own save!

Finally, below are some related topics covering free PS4 Cheats and GameSave alternatives sorted by date with the oldest first:
Spoiler: Tweets 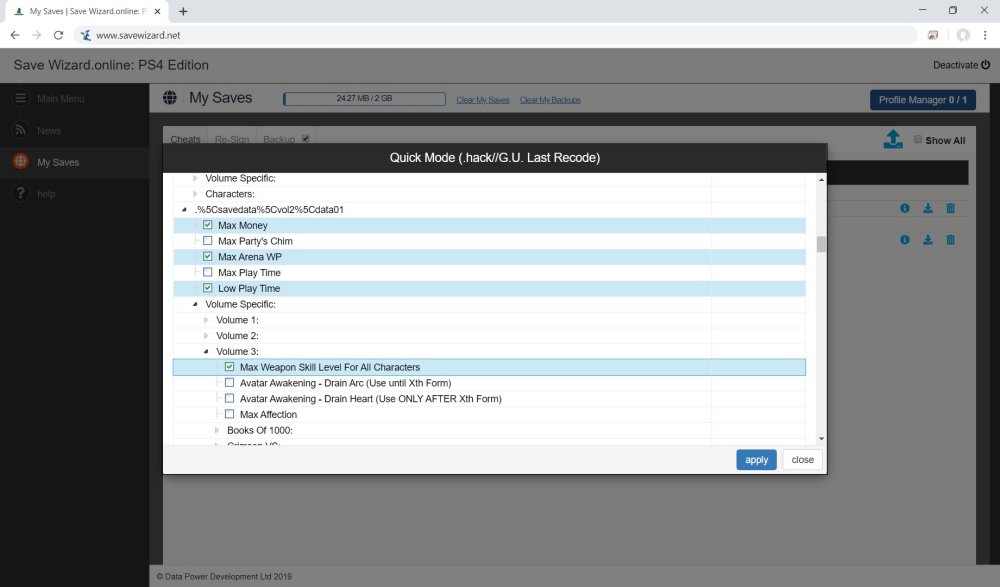 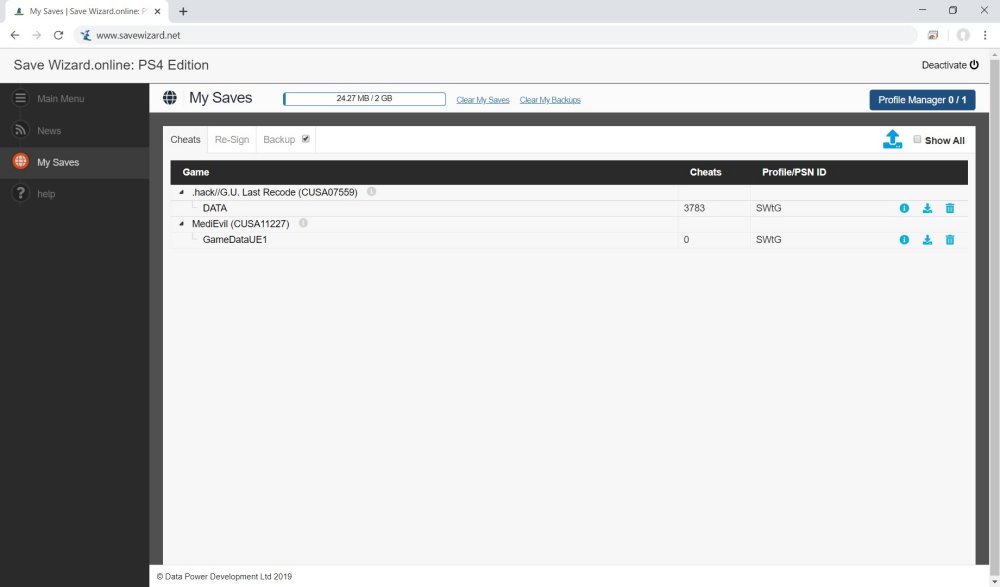 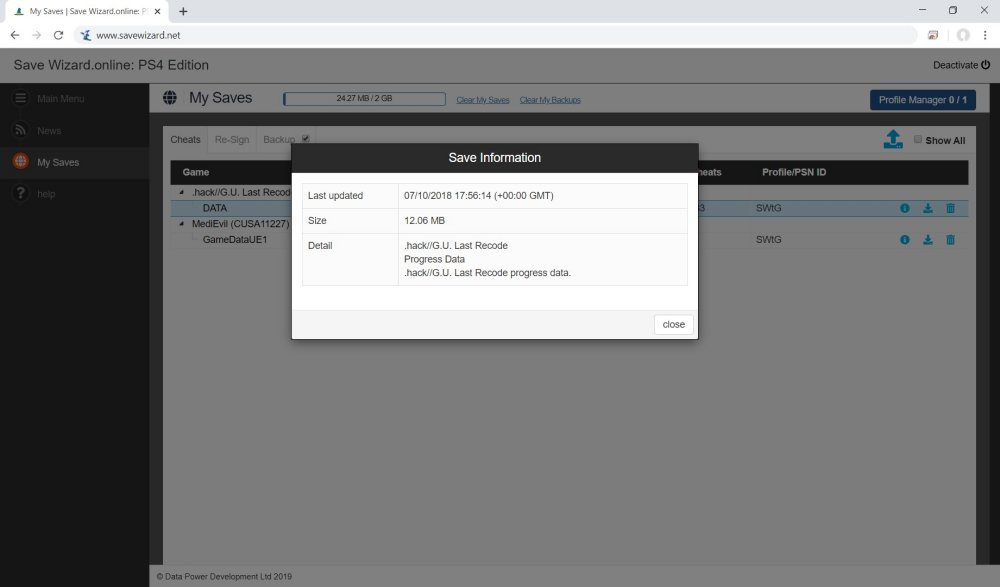 Member
Contributor
Verified
When i see on the net the amount of slots and accounts are being sold/traded, i think they already had massive earnings and they will not pass this milk cow...

You would be surprised how many people want to cheat or use saves from someone else, especially cause you dont need a jailbroken PS4 for this.

The entire playstation userbase can use Save Wizard.

Staff Member
Moderator
Verified
It took awhile but eventually the True Blue PS3 dongle source code and TB PS3 disc BCA codes were leaked publicly after they squeezed the last drop of cash they could out of the re-DRM device... then they moved on to Cobra Blackfin for PS Vita, Stargate 3DS / NX junk and TrueBlueMini for the PlayStation Classic mini console.

I've been in the PlayStation scene around 20 years now, and this tactic has been recycled since the first 12c508 PSX mod-chips and will likely continue until the OG's retire (many are in their 50's now, so perhaps another 10-15 years unless they take an early retirement).

Most smart sceners just wait long enough and everything usually ends up free when it's no longer profitable, but those who are impatient will impulsively buy stuff because they want everything 'now' and by the time a free solution comes around they've long since moved on and got over blowing hard-earned cash foolishly.

Member
Contributor
Verified
Even though I'm not a fan of paid mod solutions, it's good to know about it. Hopefully these things can move the scene up.

Senior Member
Contributor
It’s pretty hilarious how people complain about save wizard because it’s not cheap or free. But probably everyone forget about Codebreaker, Action replay and other cheating devices that were sold in shops in PS2 era as physical copies. How is save wizard different from them?

Because if it doesn’t sold on disk or flash card, doesn’t mean people behind it not investing time and effort in it. You pay money to get instant hacks for unjailed device, which (for now) doesn’t have ANY alternatives that exist for jailbroken devices.

Although i agree price around 30$ would be more attractive and affordable. But if they still sell it for 60$ then demand is pretty good.
You must log in or register to reply here.
Share:
Facebook Twitter Reddit Email Link
Recent Articles
Android PS4 Exploit Host 6.72 Server APK File by Saad Alareqi
Proceeding the PS4 Jailbreak 6.72 Exploit Menu by @Leeful (Twitter), today Saad-Alareqi shared an Android application that acts as a server to host the aforementioned PlayStation 4 v6.72 Exploit...
PS4 Gentoo Mod for RetroArch at Startup Guide by PepeCobain
This weekend @PepeCobain shared on Twitter a PS4 Gentoo Mod for RetroArch at Startup Guide to enable the multi-system video game emulator without a keyboard required and directly using a DualShock...
Mortal Kombat 11 Kombat Swap Pack (EU / US) PS4 FPKG Mods by GrimDoe
Since my previous Mortal Kombat XL PS4 Skin Mod Demo and Friday The 13th: The Game PS4 RTM Trainer, here's a Mortal Kombat 11 Kombat Swap Pack from me (GrimDoe on Twitter) alongside some new...
PS4 Debug Watch App Port for 6.72 Firmware via Withmetta
Based on the Debug Watch utility by jogolden (Twitter) and the PS4Debug 6.72 Fork by GiantPluto (Twitter), recently I (aka withmetta) recompiled PS4 Debug Watch and got it working on PlayStation 4...