Earlier this year we saw the release of a 2TB Game Drive by Seagate, and recently they've announced the addition of a 4TB Game Drive which can hold 100+ PlayStation 4 games compared to 50+ for the 2TB model.

To quote: "The Game Drive's USB 3.0 connection has high speed and is compatible with any generation of PS4 (System Software version 4.50 or higher). It runs off USB power, so you don’t need an extra plug.

You just plug the external drive directly into any USB port on the console – setup starts automatically and takes less than three minutes." 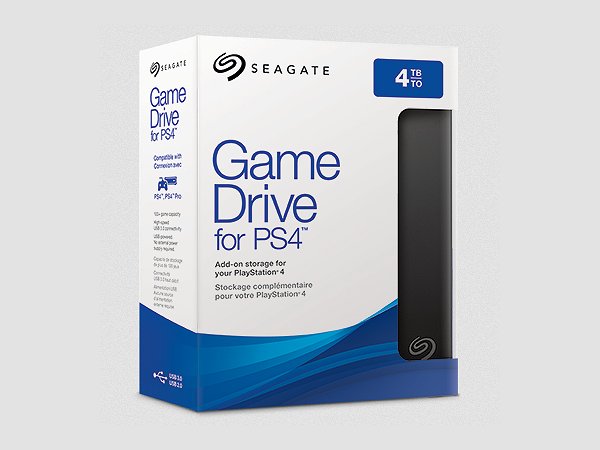 Senior Member
Contributor
Verified
So, not an ssd

Senior Member
Contributor
hmmm nice but not worth it, better buy instead a 8TB Drive ... i have enough on my ps4 with internal 4TB Hybrid Drive (Chase Mod to Fit)

Staff Member
Moderator
Verified
Pretty much, just designed specifically for ease of use with the PS4 so those on OFW 4.5+ can plug it and 3 minutes later be ready to go.

Senior Member
Contributor
They need this kind of marketing because there will be people who don't do their homework believing you can't plug any HDD into PS4. I mean just look at the typical iPhone/Mac user and their "for Apple" peripherals.

Developer
Senior Member
Contributor
If your looking to buy this DONT Seagate is the WORST Hard Drive business EVER,.... EVERY Hard Drive I bought from Seagate broke EVERYONE, I even bought a 2TB External Drive, guess what it BROKE and I RMAd it and the RMA (new in box) opened it after 5 Mins it also Broke my friend had a 3.5" Seagate HDD in his PS3 Devkit and he Told me that's the ONLY HDD he had to replace ever!