To quote from Sony European Product Manager Mayumi Donovan on this latest PS4 Bundle: Can you believe it’s barely been a year since PlayStation VR first immersed us in spectacular virtual worlds?

Since October 2016 over one million PS VR headsets have been sold, with over 100 games and experiences now available to enjoy.

And so, with Gran Turismo Sport releasing today, we’re happy to announce the Gran Turismo PS VR bundle, that’ll get you race-ready*.

PS VR immerses you in Gran Turismo Sport like never before in a ‘behind the wheel’ experience with a hyper real 360 degree view. Every single race track in the game is playable in VR, so whether you’re roaring around the race track of Nurburgring, competing 1 vs.1 against an AI driver, or admiring the realistic interiors of over 130 different cars that are playable in VR Tour, you’ll appreciate the authenticity of Gran Turismo Sport in a whole new way.

The bundle will join the two other high value bundles currently available:
With these bundles, you’ll have everything you need to start your PS VR journey, straight out of the box.

With games such as survival horror Resident Evil 7, sci-fi shooter Farpoint and super hero sim Batman: Arkham VR, there’s already a huge variety of fine titles to get stuck into. And with the likes of military shooter Bravo Team, psychological thriller The Inpatient, fantasy epic Skyrim VR and the fast-paced Doom VFR coming soon, there’s never been a better time to pick up PlayStation VR. 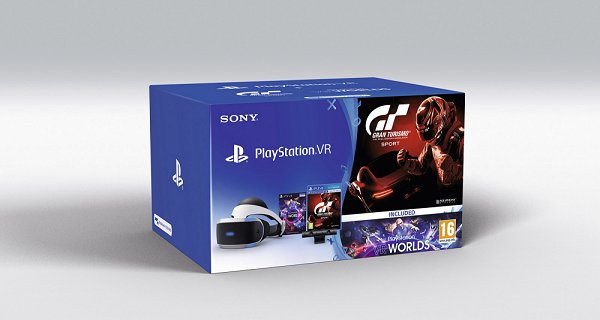