First, a quick overview on 4K and HDR. 4K content (games or video programming) displayed on a 4K TV will result in a clearer and more detailed image, giving you four times the pixels you see in full HD content.

This greatly enhances the experience in games like Gran Turismo Sport, giving you a stunning view from the driver’s seat as the impressive visuals of the track environment race by. I often describe the feeling of watching 4K as “looking through a window” into the world shown on screen.

HDR is another recent display technology that can bring striking benefits, generally in the form of more vivid, dynamic colors, deeper blacks, and brilliant highlights when watched on a compatible TV. You’ll notice how HDR enhances the colors in Horizon Zero Dawn’s lush and vibrant environment, bringing Guerrilla’s vision to life in vivid detail.

Ideally, you’ll have 4K and HDR working together, which is showcased beautifully in the dynamic weather and lighting effects of Days Gone using dynamic 4K and HDR. More games will start to support both 4K and HDR as developers spend more time on PS4 Pro. Even more ideally, you’ll be watching all this content on an OLED-based TV... but that’s a topic for another post.

All these enhancements add up to a superior gaming or viewing experience. Read on to see our top picks for the new PS4 Pro and 4K TV owner.

Developers tap into PS4 Pro’s increased power in different ways, with the ability to choose various features and enhancements depending on the experience they want to achieve for the gamer.

Examples include giving frames per second (FPS) a boost, which produces smoother locked framerates or faster targeted framerates; graphics enhanced with anti-aliasing technique – for example, you can see images with soft features such as rounded corners and faces appear smoother and more visually realistic; displaying imagery that is more intricate, increasing the amount of images on screen at once. Here are a few games we recommend for a PS4 Pro newcomer.

Horizon Zero Dawn and its new expansion The Frozen Wilds boasts a beautiful dynamic 4K implementation on PS4 Pro, which means crisp, clear vistas bristling with dangerous machines. The HDR implementation is a stunner too, especially with light sources: sunsets radiate rich reds and oranges, while staring at the sun is almost blindingly bright. Additionally, a recent free update enables players to favor resolution or framerate performance via an in-game setting — the choice is yours!

What’s already an all-out beautiful game with gorgeous use of color and high frame rate on PS4 gets a significant boost on PS4 Pro, offering up a more consistent framerate and higher resolutions. A good excuse to revisit one of 2016’s best games.

Missed one of this generation’s greatest RPGs? Here’s your chance to catch up. Two-and-a-half years later, The Witcher 3 gets a new layer of visual luster thanks to a new PS4 Pro update that adds 4K support and a slight boost to performance.

Gran Turismo has spent the last two decades pumping out legendarily impressive visuals, while ensuring its place as the real driving simulator. Now, GT Sport hits a new top speed on PS4 Pro. On top of the 4K resolution and the multitude of HDR options (including a setup process that lets you test out how you want colors to display before hitting the track), you can also have an option to choose between a more consistent framerate or a higher resolution.

Rise of the Tomb Raider

Lara Croft’s latest adventure brings some tantalizing graphics options for PS4 Pro owners. The 4K Visuals setting is a great choice for 4K TV owners with its high resolution, while the High Frame Rate and Enriched Visuals settings lock the resolution at 1080p but offer enhanced performance or visual detail, respectively. One of the more impressive examples of what PS4 Pro can do — it’s a feast for the eyes.

NBA 2K18’s PS4 visuals are already sensational, but PS4 Pro amps up the all-star visuals to Hall of Fame territory. The already courtside-quality visuals (which run at 60FPS during gameplay) get a 4K upgrade with PS4 Pro, making every player including those created by users for MyCareer mode crystal-clear on a 4K HDR TV.

Destiny 2 includes dynamic 4K visuals to make your raids look suitably eye-popping. Definitely a visual standout on PS4 Pro, and we are beyond excited for the HDR update coming on December 5.

Featuring an increased dynamic resolution for gameplay on 4K displays and a more consistent framerate, Battlefront II on PS4 Pro is the premiere console to experience the all-new campaign and a multiplayer experience that spans all three cinematic eras.

Hellblade: Senua’s Sacrifice: This atmospheric journey really shows what PS4 Pro can do. It looks razor sharp, but you can also choose to emphasize framerate instead. A standout PS4 Pro implementation for Ninja Theory’s inspired game.

In addition to all of these gorgeous titles you can pick up today, there are several titles we’re looking forward to on the horizon that showcase the power of PS4 Pro, including Marvel’s Spider-man, Far Cry 5, and Days Gone.

With a subscription, Netflix, Hulu, and YouTube support 4K streaming on select content, and Netflix recently added an update adding HDR for PS4 Pro users. Here are a few shows that show off what’s possible.

The combination of 4K streaming and HDR adds grit and atmosphere, with the show’s deep black levels and super saturated colors practically popping off the screen.

Season 2 is out now! Stranger Things’ 4K streaming and HDR adds depth and nuance to the hit show’s mysterious tone.

Watch Future Man, Hulu’s latest Original Series, in 4K on PS4 Pro when it premieres. This new comedy series from Executive Producers Seth Rogen and Evan Goldberg stars Josh Hutcherson (The Hunger Games), a janitor-by-day/gamer-by-night tasked with saving the fate of humanity. All episodes now streaming only on Hulu.

This feature only scratches the surface of 4K content, but if you want to whet your appetite for more, check out PlayStation’s YouTube channel, which includes 4K videos and trailers of top current 4K games like For Honor and Watch Dogs 2 as well as upcoming games like Days Gone! 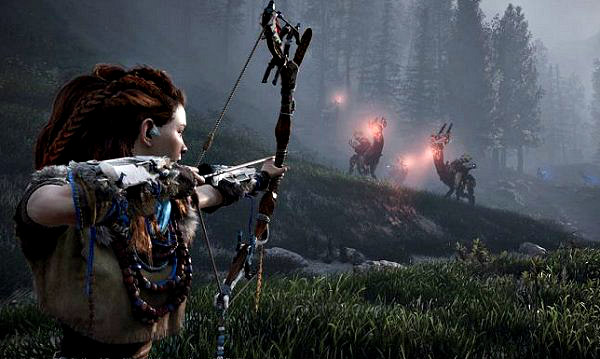