Category PS5 News       Thread starter PSXHAX       Start date Oct 12, 2019 at 5:29 AM       2,530       2
This past Tuesday Sony officially unveiled the PS5 console, and recently a Sony Holographic Display Screen patent from September 2019 surfaced leading to speculation on whether the new 3D technology could be utilized with their next-generation console or perhaps an upcoming PlayStation VR2 accessory for video gaming.

"The great thing about this invention is that the hologram display will be compatible with a Sony PlayStation console. This makes it possible to experience PlayStation games as a 3D hologram and to play via your trusted DualShock controller. Incredible right ?!

But the possibilities don’t stop there, as the Microsoft (Xbox) and Nintendo (Switch) consoles are also mentioned as compatible devices. Moreover, the 3D screen may also be compatible with smartphones, virtual reality (VR) headsets and augmented reality (AR) headsets.

Whether Sony really intends to market such a holographic screen is as yet unknown."

Although Sony's 360 Degree Display Hologram Prototype (video below) is quite interesting, Voxon Photonics have kicked things up a notch with their own Voxon Photonics 3D Volumetric Display in 4K initially inspired by the hologram from the epic movie Star Wars.

Check out all the related videos below, drop by their page for the Voxon DevKit and Unity Plugin for developers and catch the latest demos on their YouTube Channel!

And of course, one can always dream of PS9 in the distant future: 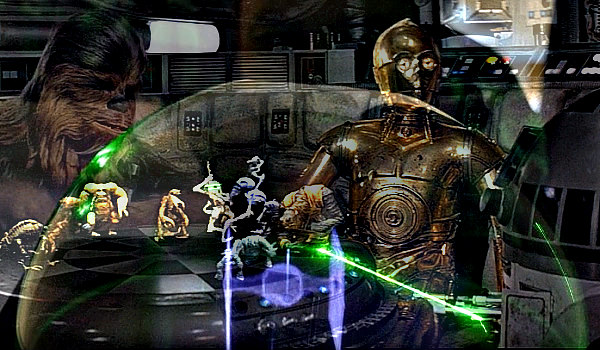 Member
Contributor
Holo-tin.
You must log in or register to reply here.
Share:
Facebook Twitter Reddit Email Link
Recent Articles
Built-in Microphone Rumored for DualShock 5 Controller Hints Sony Patent
We've heard rumors of PS5 AI Voice Assistance via PlayStation Assistant for PlayStation 5 before, and the latest Sony patent discovery suggests a built-in microphone may be slated for the upcoming...
Blu-Play DOOM I Port by Sleirsgoevy, Homebrew Games with C / C++
Following the second PS4 Blu-Play homebrew release The UFO Game! from LuBlu Entertainment, developer sleirsgoevy demonstrates that you can create Blu-ray Disc Java homebrew with C or C++ using...
Installing PS4 Gentoo Linux on PlayStation 4 Guide by Mircoho
After the recent PS4 Gentoo Kernel Sources 5.3.7 with Baikal Chip Patches, here is a guide by me (@mircohoooo) covering how to install Gentoo Linux on PlayStation 4 and turn your PS4 into an...
PKGEditor for PS4 Updated by Maxton with EKPFS / XTS Key Support
Since yesterday's PS4 PKG Backporting updates PlayStation 4 scene developer maxton of Maxton.xyz announced on Twitter that he updated the LibOrbisPkg PkgEditor adding support for EKPFS / XTS keys...