Here's a summary of each from Sony Senior Manager of Game Services Content Adam Michel, to quote:

Prepare for the fight of your life next month as you lock swords with otherworldly evil in brutal action-RPG Nioh, and struggle for survival in tense psychological horror Outlast 2 – both joining the PS Plus monthly games lineup on November 5.

Nioh is a visceral, action-driven adventure where you must hone your skills, upgrade your weapons and demonstrate perseverance and mastery in besting some of ancient Japan’s fiercest demons.

Travel to the blood-soaked Sengoku period and take on the role of an embattled outsider as you fight to liberate a guardian spirit from the clutches of a power-hungry sorcerer.

Immerse yourself in a desperate fight for survival in an isolated rural community as you attempt to rescue your kidnapped wife from the clutches of a deranged cult.

Having narrowly escaped death in a helicopter crash, set out into the rundown village of Temple Gate and do your best to avoid its crazed inhabitants as you fight to locate your partner.

Haunted by your troubled past, look for answers as you uncover the ever more disturbing secrets lurking beneath the town and the twisted ambitions of its charismatic leader.

Both Nioh and Outlast 2 are available to download from PlayStation Store between November 5 and December 3. 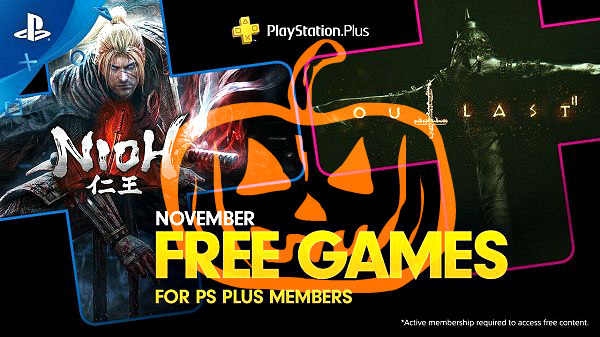 Senior Member
Contributor
Verified
The best PS Plus game duo in my opinion.