Here's an overview of each from Sony Global Store Services General Manager Nick Maguire, to quote:

Here are the games for PS Plus members, available July 7 until August 3.

NBA 2K has evolved into much more than a basketball simulation. With its immersive open-world Neighborhood, NBA 2K20 is a platform for gamers and ballers to come together* and create what’s next in basketball culture.

In Rise of the Tomb Raider, Lara uncovers an ancient mystery that places her in the crosshairs of a ruthless organization known as Trinity. As she races to find a powerful and sought-after artifact before Trinity, the trail leads to a myth about the Lost City of Kitezh.

Lara knows she must reach the Lost City and its hidden secrets before Trinity as she sets out for Siberia on a thrilling expedition.

With the traumatic events that have haunted you as a child dragged back into the light of the present-day vis grisly new clues, it’s up to you to unearth the shocking truth behind this devastating tragedy. Every choice you make influences how the game develops, with multiple endings awaiting you at the finale of the emotional branching narrative.

Finally, in celebration of the PlayStation Plus 10th Anniversary we'll be releasing a free PS4 theme later this week to celebrate 10 years of PS Plus. The theme will be available on PS Store for a limited time, so be on the lookout.
For those of you who haven’t tried the online multiplayer benefit for PS Plus, we’ll also be hosting a free online multiplayer weekend starting July 4 at 12:01AM through July 5 at 11:59PM in your local time. (Online multiplayer game sold separately. Requires internet connection and PlayStation Network account.) 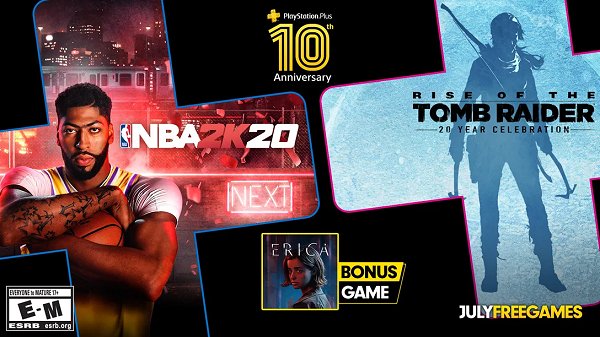 Member
Contributor
Verified
Nice, going to make sure I get it
You must log in or register to reply here.
Share:
Facebook Twitter Reddit Email Link
Recent Articles
Sony Unveils First Look at Box Art for Upcoming PS5 Games
Topping the PlayStation 5 News today is a PS5 Box Art Unveiling giving everyone a sneak peek at what PS5 games will look like when seen on store shelves this Holiday 2020 season.