The next PlayStation State of Play live streaming event takes place this afternoon featuring a first look at Horizon Forbidden West gameplay footage captured on PS5 alongside more trailer videos below for the PlayStation 5 Scene to enjoy!

"This reveal has been a true team effort and we’re very excited to show you what we have in store. Whether you’ve been with us and Aloy since Horizon Zero Dawn or are only just getting to know this incredible world, we want to share this huge milestone with you and cannot wait to see your favorite moments and reactions."

Destiny 2: Season of the Splicer Vault of Glass PS5 Trailer

Stored away, deep in the Vault of Glass on Venus is Atheon, Time's Conflux. No one knows what this Vex is. Guardians must access the Vault, navigate the fractures in space and time, and terminate Atheon before it can become an unstoppable threat.

Embrace the challenge of a roguelike deckbuilder with unique mechanics from the developers of Faeria and Richard Garfield, creator of Magic: The Gathering. Build a team of two heroes, unleash powerful combos and defeat the legends of the Roguebook!

It's time for another episode of Zurkon Jr's Almost Launch Party! The final of three videos showcasing Ratchet & Clank: Rift Apart, an interdimensional thrill ride coming to your PlayStation 5 console! A dimensional cataclysm, an evil Emperor with ARMIES at his disposal, and only TWO LOMBAXES AND A TINY LITTLE ROBOT TO SAVE THE DAY?! How will they win?!

From the ravaged streets of Raccoon City to the black Fog of the Entity’s Realm. The hunt is on...

The Resident Evil Chapter is coming to Dead by Daylight on June 15th. It includes a Killer, The Nemesis; two Survivors, Leon S. Kennedy and Jill Valentine; and a new map of the iconic Raccoon City police station.

Own The Show. Own Your Rivals. MLB The Show 21 is now available.

The great outdoors is calling! Grab your friends and explore lush woodland and snowy hilltops in search of rest and relaxation in new level Forest, out now on PS4 and PS5.

Mystery and mayhem are just round the corner, not to mention crashed planes and heavy machinery. Did somebody take a wrong turn?

Conan Exiles: Isle of Siptah is out now! Survive, build and dominate in a brand-new and mysterious island, filled with ancient and mythical creatures, dungeons, NPC camps and loads of new and unique loot.

Where there is light, there must be shadow. First Aragami 2 Gameplay Trailer Showcases Major Evolution of the Stealth Action Franchise. Aragami 2 is releasing September 17th 2021.

Trapped in a buried temple, unaware that something ancient and evil has awakened in the shadows... Go deep underground in the first gameplay reveal of House of Ashes.

Using fists, feet and whatever weapons come to hand, the Eight Dragons must fight their way from one end of the city to the other, to reach their ultimate showdown. But each Dragon has a different path - it's only when they come together that their true destiny is unlocked, as their stories intertwine and the full epic fight is revealed!

Berserk Boy is a vibrant, retro-inspired 2D action platformer that lets you… GO BERSERK! Change into different forms and use the power of Lightning, Fire, Earth, Air, and Ice as you race through stylish stages in a heroic battle to save the planet from the evil Dr. Genos!

Experience The Full Package, Remastered. Steelport, the original city of sin, has never looked so good as it drowns in sex, drugs and guns. The Third Street Saints are at the height of power and yours to control. This is your city. These are your rules.

Tune in from 9AM Pacific Time for a uniquely crafted countdown to the main event - starting at 2PM PT.

Join Aloy as she braves the Forbidden West, a deadly frontier that conceals mysterious new threats.

This 14-minute gameplay sequence first debuted during State of Play on May 27, 2021. Coming to PlayStation 4 and PlayStation 5 consoles. 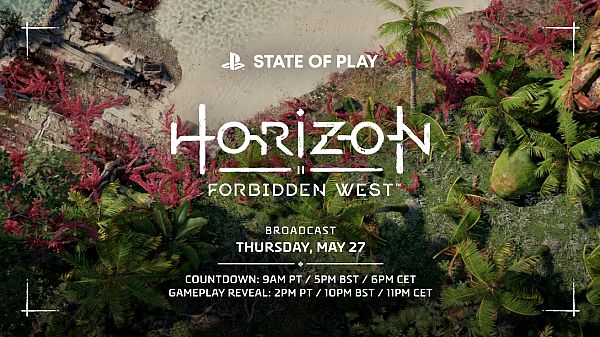 Staff Member
Moderator
Verified
It's fascinating how far things progressed in recent years, I had to look twice at parts of the Horizon Forbidden West PS5 gameplay reveal trailer to make sure it was computer-generated graphics I was watching.

Member
Contributor
Still struggling to get hands on ps5 , but first title will be horizon, when i get it

Member
Contributor
Verified
Impressed there are so many good titles this early into the PS5 cycle!

Senior Member
Contributor
Verified
If the games look so realistic on the PS5, i imagine how would they look on PS5 pro, PS6, PS7...