As evidenced once again by Take-Two Interactive Software's (whose subsidiaries include 2K Games and Rockstar Games) recent legal action, history repeats itself as their latest lawsuit (PDF) aims at Grand Theft Auto 3 / GTA Vice City Modders of the fan-based re3 and reVC reverse-engineering project.

Back in 2017 we witnessed Take-Two (T2) Ordering Modders to Halt Game Modding Tools until the development community bounced back adding OpenIV 3.0 Featured PS4 (Orbis) Support, so Rockstar Games and Take-Two Interactive Software sought vengeance and Obtained Warrants to Search Homes of GTA5 Cheaters... after which the FBI's Warrant Ordering PS4 PSN Data from Sony (in an unrelated case) wasn't much of a surprise either.

To quote from VideoGamesChronicle.com on Take-Two's most recent lawsuit allegations, in part:

Take-Two is now suing the programmers who worked on the GTA project, claiming they “are well aware that they do not possess the right to copy, adapt, or distribute derivative GTA source code, or the audiovisual elements of the games, and that doing so constitutes copyright infringement”.

While GTA community homebrew developers managed to port GTA 3 and GTA Vice City to modern platforms without utilizing the original source code, according to a Kotaku.com report it appears Rockstar is also planning to bring the GTA Remastered Trilogy to PS5, Switch and Xbox consoles... perhaps an underlying reason for these otherwise frivolous lawsuits.

If I bought GTA3 back in October 2001 when it was released I'd definitely NOT be willing to repurchase it again 20 years later (especially at egregious R* pricing further enabling them to sue scene devs) just to play an antiquated game on a modern platform... emulation FTW, feel free to share your comments below! 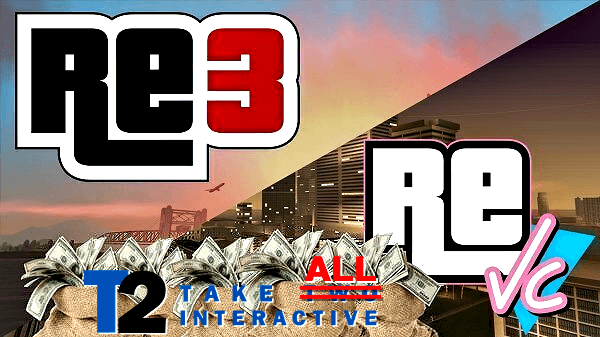 Staff Member
Moderator
Developer
Senior Member
Verified
Imagine modders who are usually very passionate about this stuff, who spend hours and hours trying to make this old games have a better QoL or make them work on systems they didnt and make this games not die in 2000 just to be treated with dumbass lawsuits from its dumb company... I didnt play it tbh, i left GTA back where it ended in 2000s.

Imagine if modders never saved games that these dumb companies release untested for 70€... Imagine if they actually started taking advantage of mods and make them official, oh wait they already do that, literally after they sue who did it... Maybe thats their plan with GTA remastered. I absolutely hate corporations.

Staff Member
Moderator
Verified
Heh, in 2001 I was in the PS2 scene and still didn't waste cash on video games... as noted in my sCENE rETROSPECTiVE back then Swap Magic, PS2 Cases, DVDRiPs and mod-chips were all the rave until HDLoader surfaced and saved people more time and money not having to buy and burn game backups to CD-R's / DVD-R's... everything stored on the PS2 HDD was at your fingertips in a simple GUI menu.

It's unfortunate many of today's generation 'accept' paying for recycled content through streaming services like Netflix, Hulu, PS Now, etc when most content is available for free if you just take some time to learn.

Companies like Take-Two prey on the uninformed and lazy to keep milking the same cash cows they've relied on for decades... because why focus on new intellectual property when you can repack old content 20 different ways and re-charge the customer each time on every platform. Their revenue was 3.09 BILLION USD (Annual Report) in 2020, yet they're now suing the fan base that contributed to their financial success.

Senior Member
Contributor
Verified
meh, first they shut down GTA Underground which i have been followed like dunno 6 years and now this >_>

Staff Member
Moderator
Developer
Senior Member
Verified
"Their revenue was 3.09 BILLION USD (Annual Report) in 2020, yet they're now suing the fan base that contributed to their financial success."

This part alone says all...