Below are the details courtesy of Game Director Daniel Robinson, to quote: What is The Lost Bear?

The Lost Bear is a 2D cinematic platformer for PlayStation VR, as you control a young girl named Walnut who sets out to rescue her teddy bear and bring her back home. The player sits inside a 3D diorama, inspired by puppet show theatre, that reflects what’s happening within the game and alters as the game progresses.

Walnut’s story originates from my little sister, who always wandered off to the woodlands with her teddy bear by her side. She has always inspired me through her bravery and willingness to overcome her fears. And so, this game is all about a young girl called Walnut also overcoming her fears when she is alone in a wondrous, surreal and dangerous world.

The project started at Norwich University of the Arts and ‘Dare to be Digital 2013’ where myself and two close friends wanted to accomplish a dream by creating our very own game. We were inspired both by Limbo and Eastern European puppet shows (our art director Harry is from the Czech Republic) and we teamed up with Fabrik Games to create and release The Lost Bear on PlayStation VR.

As developers, we are always intrigued by new mediums and different ways to convey our games. PlayStation VR was a new platform we could use to create an experience that felt like the player had been transported into a puppet show set in The Lost Bear world. The Lost Bear and the PlayStation VR work together to create a unique, immersive experience. This gave us the ability to place the player directly into an ever-changing theatre, as the environment shifted around them as they progressed through the story.

Using the Dualshock 4 motion controls, we are able to give the player the ability to interact with the world around the player. We wanted to create mechanics that didn’t intrude on Walnut’s story, but would give the player control of the 2D environment using the 3D space.

The evolution & importance of the diorama

The diorama, the environment that surrounds the player, was created to help fully immerse the player into Walnut’s world. It’s a 3D/2D diorama that mirrors the 2D world; offering a visual language in which it subtly reflects the progress of Walnut through the game.

For example, to the enviroment to the left of the diorama space the environment will reflect where Walnut has been previously, while the right will foreshadow elements of what she will encounter next.

The challenge of making VR work in a 2D world

Creating an art style that worked collaboratively within a 2D and 3D form was a key focus; we had to make sure that everything visually linked together.

The VR mechanics of the game took a lot of time to get right. We didn’t want Walnut to be aware of the player and we wanted to avoid any mechanics that did not fit the feel of the experience or break the flow of the game.

During the prototyping phase we tried many gameplay iterations, and other gameplay prototypes. The decision was made that if they didn’t ground the player within the experience, or feel viable to coexist between 2D and 3D, then they wouldn’t make the cut. 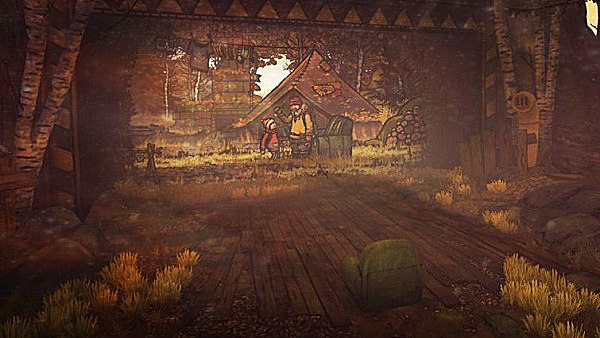