While this custom PC is not available for sale, according to PCGamer.com to quote: "a similar system on the PC side using Origin PC's Genesis configuration and came to around $8,000, which didn't include a 14TB hard drive or Elgato 4K60 Pro.

Some of the part selections in the Big O are not offered by Origin PC (I didn't see an MSI Meg Z390 Godlike, for example), but the $8,000+ price tag is a rough approximation before factoring in the custom modded consoles and dock, which itself is custom designed as well."

Here are the Tech Specs of this truly ultimate gaming PC:

PC
PlayStation 4 Pro
Nintendo Switch
Xbox One X
Think something comparable can be built for under 8 grand? Personally I'll await their next-gen version that will likely include a PS5.

Every Console In One Box - The Origin Big O 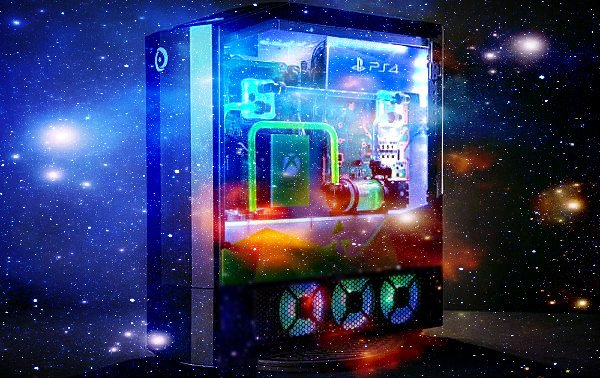 Member
Contributor
Verified
in holland we have energy company named ENECO. they are very HAPPY. lol

Member
Contributor
Verified
+8k$ PC that will be outdated in 2 or 3 years when the next generation of consoles will come out. Also I would feel bad to have such a beast when I don't have so much time to use it probably.

Senior Member
Contributor
Verified
Nah! This is "Stupidest PC", ever! For me AMD FX-8350 + ASUS RX570 + 16GB RAM enough for gaming needs. And PS4 Slim works quite well without any additional cooling. If I has additional 8K $, maybe I better buy... new car (it's possible, if sell old one)?

Senior Member
Contributor
Here are a few of my console in PC cases mods.

I do these mods in case I ever come across a console with missing or a damaged case.

Unfortunately I've already completely lost a few of my other mod build logs with the closure of some of the other some well known gaming forums.

Senior Member
Contributor
I love this little monster but i don't know how i can build them, i own ps1 classic, ps4 pro, ps3, ps2, wii and this little i7 8700 pc

no thanks i'm no fan in x-box and nintendo since i own pc why should i bother buying xbox consoles
@azoreseuropa according to unbox theraphy they are worth 17 grand, i don't know how they are able to build those in one single pc case that must require some feats
You must log in or register to reply here.
Share:
Facebook Twitter Reddit Email Link
Recent Articles
PS4 6.72 Payload Ports, Updated Mira Project Support & ELF / Loader
Following yesterday's PS4 6.72 Payload Ports by @Al Azif on Github, this weekend kiwidoggie added 6.72 support updating Mira Project to include 4.74, 5.01, 5.03, 5.05 and 6.72 Passing Builds with...
PS4 Payload Injector 2.1 Windows GUI Application by TheWizWiki
We've seen several PS4 Payload Injectors over the years including NetCat GUI, PlayStation 4 Tool, PS4 Tool.apk, Payload Injector PS4, PS4 Memory Editor & ELF Loader, PS4 Avatar Injector, PS4...
Sega Announces Astro City Mini Arcade with HDMI Out and Classic Games
The legendary @jwooh let us know that following the Genesis Mini, TG-16 / PC Engine Mini and Capcom Home Arcade developer Sega recently announced their Astro City Mini Arcade featuring HDMI out to...
Sony Unveils First Look at Box Art for Upcoming PS5 Games
Topping the PlayStation 5 News today is a PS5 Box Art Unveiling giving everyone a sneak peek at what PS5 games will look like when seen on store shelves this Holiday 2020 season.