Following his previous update, PlayStation developer @batman has been hard at work on the Unreal Engine 3 free multi-platform 3D game engine known as UDK Ultimate with the help of developers @PixelButts and @epicerror, and below are some recent 2017 updates and video demos for those anxious to create your own games for PC, PS3 and XBox 360 complete with a type of Gears of War Creation Kit!

With the addition of PlayStation 3 support after sorting out the PS3 export issue, he confirmed that games created in UDK Ultimate will be able to run on both the XBox360 RGH and any PS3 with Custom Firmware (CFW) meaning PlayStation fans will no longer will need a DECH / DEX developer console to experience it.

There is still work to be done, but he let us know a UDK Ultimate release is not too far off... until then, check out their new UDK Ultimate YouTube Channel with some demonstration videos below! 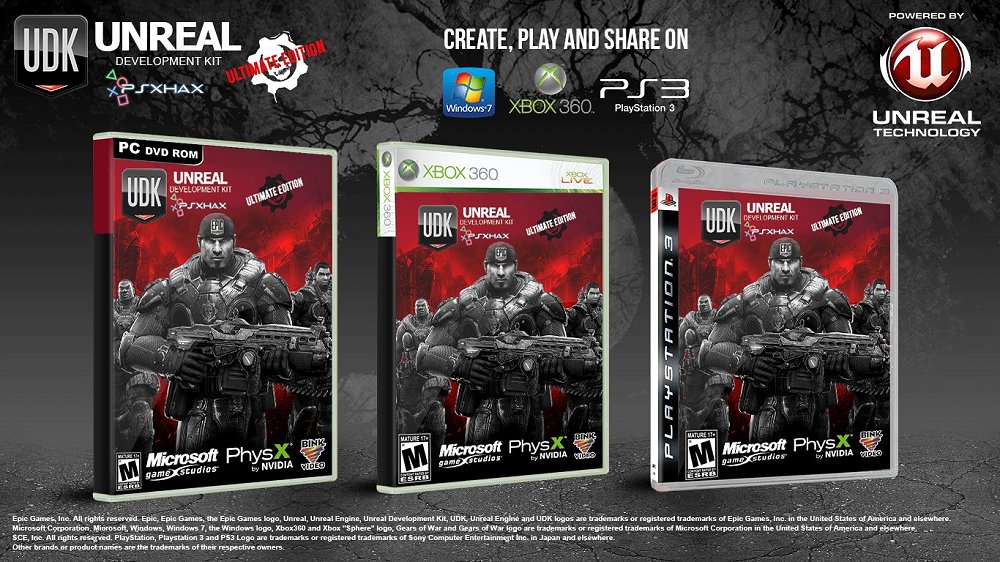 Senior Member
Contributor
Backups confirmed on 4.50 OFW!!! I mean, it'll be awesome to play some Gears of War on a PS3!

Developer
Senior Member
Contributor
I wonder who made that first video

Anyways cool I haven't gotten an update for this in a long time. @batman I am willing to test on OFW, I am guessing CFW is all taken care of. I may have a way you can use this on OFW it will have restrictions. You can PM me if you want more info.

SockNastez said:
I wonder who made that first video

Anyways cool I haven't gotten an update for this in a long time. @batman I am willing to test on OFW, I am guessing CFW is all taken care of. I may have a way you can use this on OFW it will have restrictions. You can PM me if you want more info.
Click to expand...

Is "Restore a backup" really that broken?

orkalass said:
Is "Restore a backup" really that broken?
Click to expand...

Ugh it's not as simple as "Restore a backup", after all this is YOUR project so a premade backup won't be available towards you. When did I say it was broken?

All I said was it would have restrictions which is true. The OFW thing is for people making there own projects sure you can use the restore backup method with other peoples projects, but if you are someone who wants to make his/her own project restoring a backup won't be as easy in that situation if you only have an OFW and no CFW.

I am just gonna take a guess your next statement will be "Then ask someone on CFW do make the backup for you.". My response to that is that it's just a big waste of time to do that. I play a small role in this project the first video look at the description. I might as well try my best to help.

Developer
Member
Contributor
Hello friends. After I release UDK Ultimate, I will try to find a way to make it run on OFW, so anyone will be able to create and play homebrew games on their OFW PS3.

But about OFW is not simple that way. My idea, I need to test if this will work, involves yes Backup Injection, however, I am not going to use UDK Ultimate itself, because the UDK Ultimate Eboot.bin is not signed, so it never will run on a OFW.

But now I need to focus on finishing UDK Ultimate for PS3 CFW, then I will dig up on this.

And to my friend SockNastez man, I will soon send you another testmap for testing to me on your PS3 CFW ok? I did not send another test because I was studying on how to port GOW weapons to UDK Ultimate, and now as I already finished that step, I will compile this last testmap UDK Ultimate Total Carnage for you test on your PS3 CFW.

Senior Member
Contributor
Whoa, To bad my ps3 is stuck on ofw... anyone got e3 flasher? lol
Great job on the project you guys!

Developer
Member
Contributor
can you remove my tweet about rez infinite? it has literally nothing to do with this