XBox One X (Project Scorpio) Unveiled at E3 2017 by Microsoft!

Below is a video some XBox One X pictures and details courtesy of TheVerge.com, to quote:

"All existing Xbox One accessories will work on the new Xbox One X — which we got to see first-hand at E3 today — alongside all existing Xbox 360 backwards compatible titles and Xbox One games. Microsoft is planning to use "super sampling" on the One X to make new games look better even on 1080p TVs.

Microsoft is also shipping the Xbox One X with an Ultra HD Blu-ray drive for 4K movies and entertainment, and 1TB of storage.

Microsoft says the new Xbox One X is the "smallest Xbox ever," and the black design looks very similar to the existing Xbox One S model. The rear of Microsoft’s new console is based on the Xbox One S, with a HDMI-in port and no dedicated Kinect port. There aren't many external changes over the Xbox One S design, and the X simply gets a little smaller.

Microsoft has 22 'console launch exclusives' arriving on the Xbox One X, including Crackdown 3, Forza Motorsport 7, and Sea of Thieves." 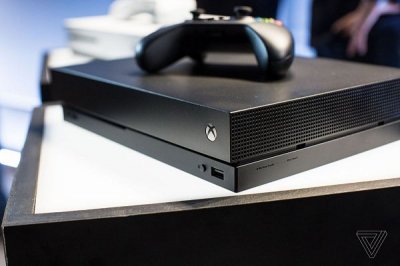 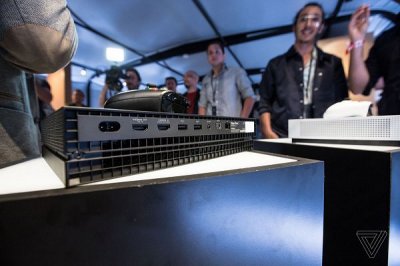 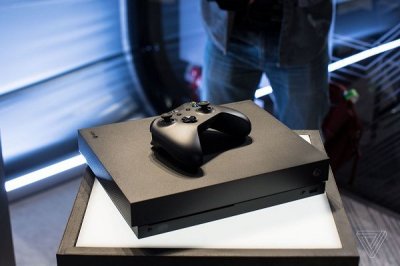 Member
Contributor
Could just be me, but it reminds me of the PS2 phat.

lotnybartek said:
If someones JB it, I'll buy it.
Click to expand...

There no such thing as a JB for Xbox...

But there is a Modded SaveGame Editor coming out for Xbox One that works on All System Firmware. Which works fine with MWR (First Supported Game title)

Submission for Next Mod SaveData

Senior Member
Contributor
Verified
Other ugly console. Microsoft surely don't know how to make console look so cool and it is only 4k and a little bit increase ram just like PS4 Pro. Nah, I will pass. I am fine wth PS4!

azoreseuropa said:
Other ugly console. Microsoft surely don't know how to make console look so cool and it is only 4k and a little bit increase ram just like PS4 Pro. Nah, I will pass. I am fine wth PS4!
Click to expand...

I hate fan boys like you that new xbox is gonna blow that crap that sony made and is ripping people off with out of the water don't get me wrong i love playstation but the PS4 PRO doesn't even have a blue ray drive nor any capabilities to run 4k not even close plus who gives a book what the crap looks like im not looking at that im looking at what it puts out grow the book up and stop being a fan female dog... Just learn to love gaming.

I might have to get me one of these the launch exclusives look amazing and just exclusives loook so good. I can't wait for sony's today at 5:00pm don't for get to watch it at live.playstation.com

People dont care about ghz or TFlops, just say: "give me the cheapest console". And the seller answer: "Just buy a PC".

This is the last consoles generation, for sure, for good.

People dont care about ghz or TFlops, just say: "give me the cheapest console". And the seller answer: "Just buy a PC".

This is the last consoles generation, for sure, for good.
Click to expand...

Member
Contributor
Xbox Scorpio Won't Have Any Exclusives At All

Contributor
Is this some kind of XBOX Comercial crap?