The payload also includes PS4HEN for all the games

Setup:
Using a game tool:
Using the peek poke functionality:
If you want to save the dump to a file, peek first the click "Save to File".

Select a save location and specify a name (doesn't need to have a file extension).

Known Issues:
If you find any other issues report them here so I can fix it!

A few pictures of the tool: 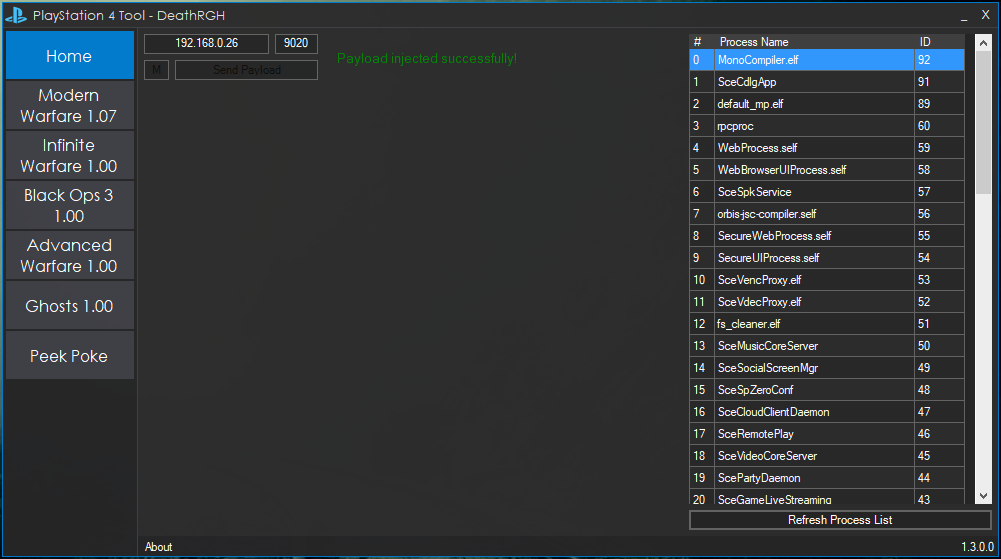 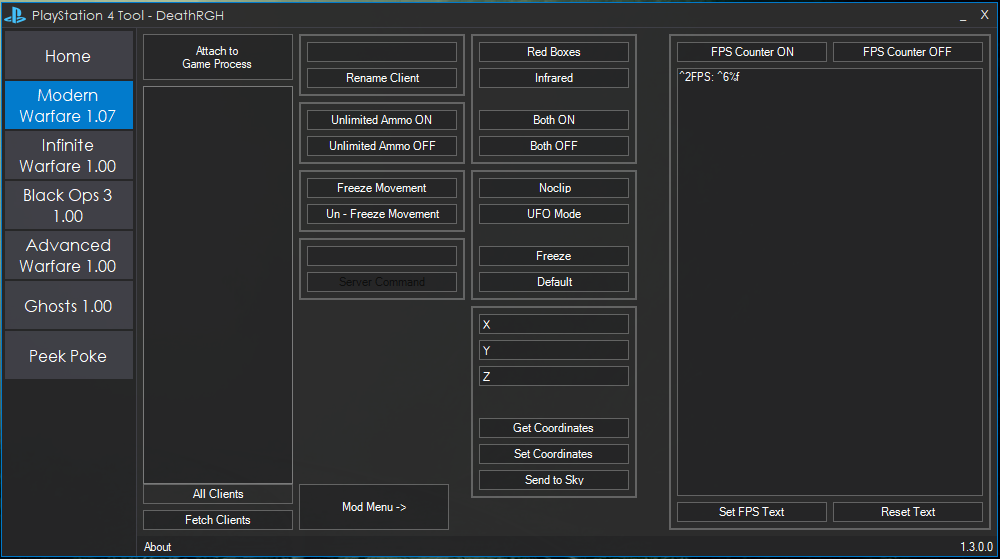 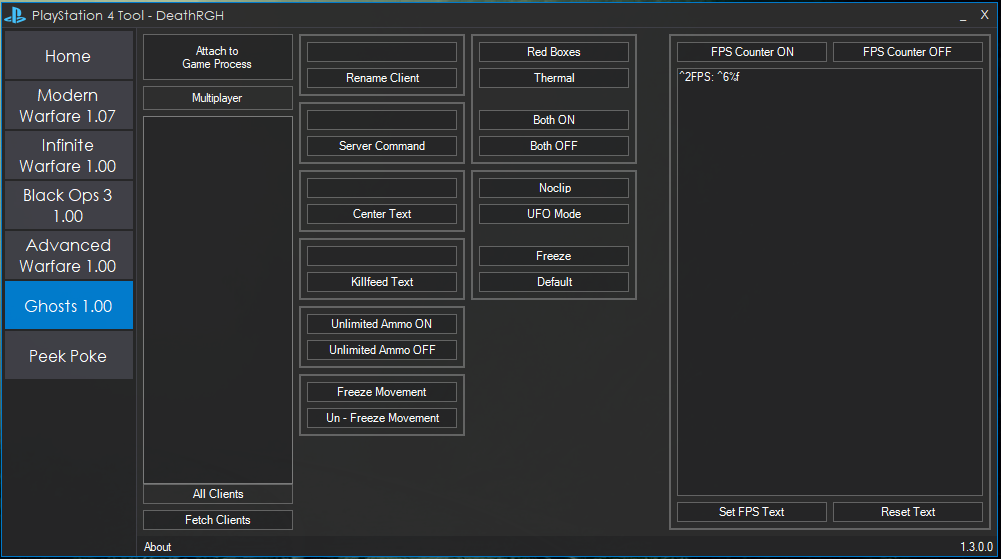 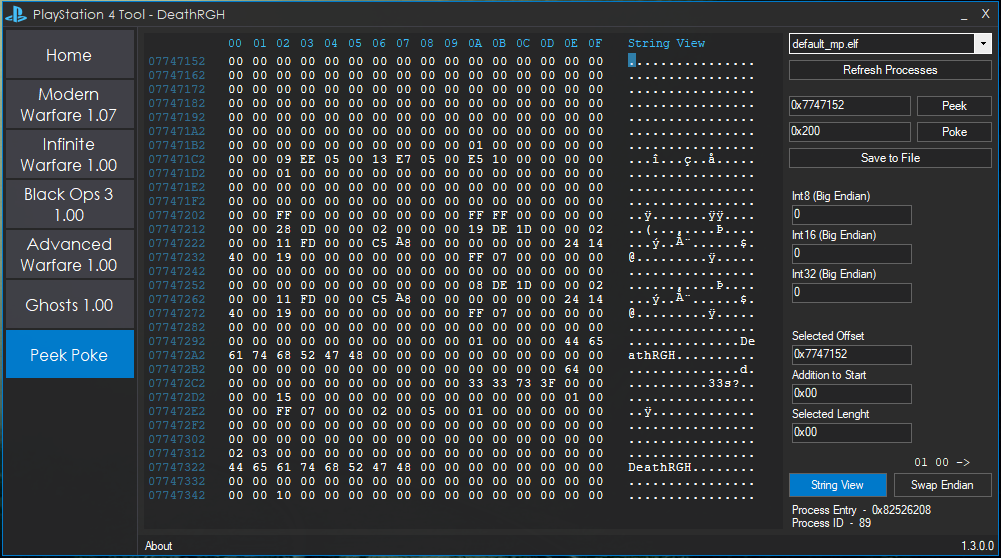 Pictures of the MWR mod menu: 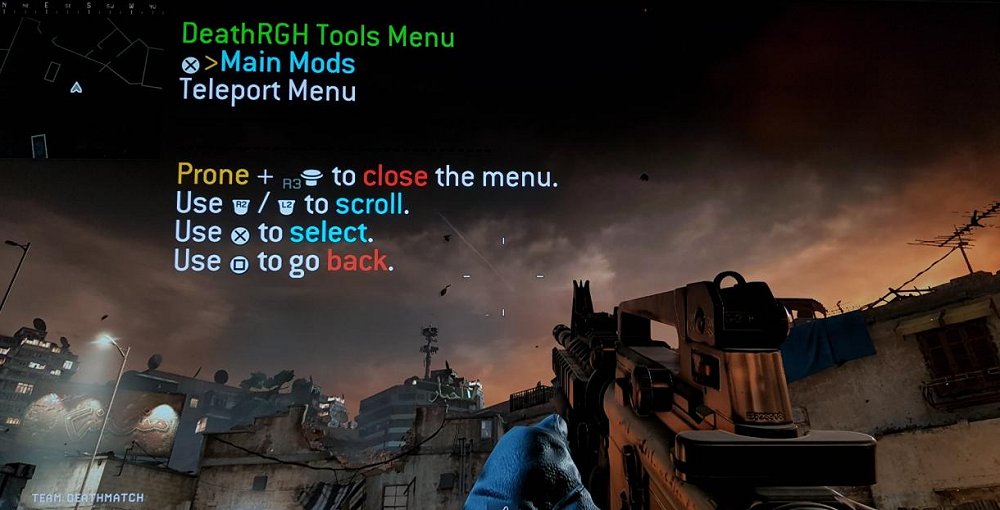 Source will be released on git hub once code is cleaned up! 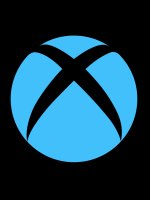 DeathRGH
I started modding on the xbox 360 back in the day. I then started to make my own tools and plugins. Since ps4 is the next best thing im here now, creating mods for that console.

Please note that the cod ghost tool and notifys are only available on 4.05 for now!

​
For more details take a look at the changelog.

Developer
Senior Member
Contributor
Verified
@knfilter9 you may have noticed that I discontinued this tool. Im working on a new toolbox to have more space for tools and it's also easier for me to include multiple versions on games...

Member
Contributor
@DeathRGH super possible to know when can we test it? thank you

Member
Contributor
When are you going to release the new update with the BO3 1.23 offsets? Been patiently waiting but now I'm becoming impatient after seeing multiple people with it but no public release @DeathRGH

Developer
Senior Member
Contributor
Verified
@GodsRTM im currently having trouble with my isp, i cant acess ip v4 web pages, only v6. And I also got a new pc. Im currently transfering everything over that is on the old hdd.

My issue right now is, that I cant download visual studio to acess the compiler. As soon as my isp has his stuff fixed I will install vs and remove all things that I left in for testing but doesnt work. I will then release it.
You must log in or register to reply here.
Share:
Facebook Twitter Reddit Email Link
Recent Articles
PS4 Renesas RL78 Debug Protocol Implementation by Fail0verflow
Following the PS4 SysCon Renesas Chip Image and updates by droogie, PS4 Glitch Pinout research via @juansbeck and their PS4 Aux Hax Parts 1-4 today fail0verflow shared with PlayStation 4 scene...
PS Store Big in Japan Sale Live with Deals on Over 500 PSN Titles
PS Store's latest Big in Japan flash sale features discounts on over 500 PSN titles including Kingdom Hearts All-In-One Package, NieR: Automata Game of the YoRHa Edition, Code Vein and more!