Category PS4 CFW and Hacks       Thread starter PSXHAX       Start date Feb 25, 2020 at 1:14 AM       21,605       81
Earlier this month PlayStation 4 scene developer charlyzard released a PS4OfflineAccountActivator and now he's made available via Twitter a PS4 Offline Account Activator GUI for those like me who prefer using a Graphical User Interface.

Activates PSN account on jailbroken PS4 allowing you to export save data to USB among other things. The offsets are for 5.05 fw version.

It's better to use this program on a new account. If you use it on an old account (with saves and trophies) you'll encounter these problems:
I repeat, I recommend to use a fresh console account for the activation, but do as you wish...

6. Click Set Id & Activate​
7. Click Get Users again to check if it was changed properly​
8. If you used an old account with trophies then fix the problems in the Notes & Warnings section​
Credits

Thanks to jogolden for the great ps4debug and to all the PS4 scene for making this possible.
PS4 JAILBREAK PS4 Offline Account Activator GUI via seanp2500 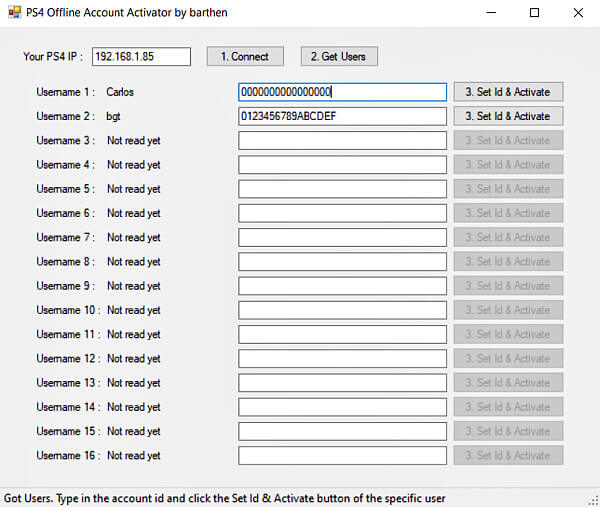 Senior Member
Contributor
Verified
i ran the rebuild.... it brought back the ps4 games but did not bring back any of my 71 ps2 remakes? shrugs I guess those have to be reinstalled manually again. Then after that I will do the trophy deleting steps again. good way to spend a saturday lol

Developer
Senior Member
Contributor
Verified
Thats the problem with the python rebuild script, It does not fix all games like PS2 or some homebrew.
Another big problem is that you will now not be able to delete your games anymore!

The only way to fix it is to manually edit the app.db and change 'canRemove' from 0 to 1 for that game.

Senior Member
Contributor
Verified
Yep 50 some ps4 games and 1tb internal hd... says have 64 gig left... lol so ya. I suppose if you install.missing games back onto the ps4 they wouldnt take up more space, but just "replace" the data that the ps4 says is already installed???

Then I'll have to modify the app.db and find all the old games that used to be on my 8tb external... and change all the delete permissions... that is probably way its shows 64 gig space left.

Ya this last time around (before doing the whole activate profile) I installed just a few ps4 games back onto the ps4 and just the ps2 remakes I was building and testing etc. I think you are correct... better to NOT have much installed internally.

(I used GOW on external and Horizon zero dawn, but would get slow downs... also really resource heavy games are probably better on internal storage) BUT ya... your idea of just a few games.installed is probably the best idea!

Member
Contributor
Verified
awesome, going to try this out.

Senior Member
Contributor
Verified
@Leeful interesting tidbit. remember when i said i had like 64 gig of space left when you go into storage.... and when i rebuild the db it didn't restore any of the ps2 remakes?

Well when i went to add 4 ps2 PREVIOUSLY INSTALLED ps2 pkgs back onto the internal, A/ I got the warning saying "The same content has already been installed. Do you want to continuing installing?" to which i just said yes.... So I added 4 PS2 remakes Back tot he ps4 and the Storage space gave the exact same number after installing, 64?

I had looked at the app.db prior to this to see if anything would have to have the delete option changed etc and it didn't list any PS2 .pkgs either but it seems the ps4 still has them on the internal somewhere... but it is not listing in the app.db weird?

Also another interesting weird thing was there was one PS2 remake pkg that for whatever reason came with the ps4 games after database rebuild? which is really odd

Developer
Senior Member
Contributor
Verified
Yes that normal. The size of the storage won't change because all of your installed game fpkgs including the PS2 ones are still on the PS4 hard drive and are taking up that space.

The fpkgs dont get deleted when the PS4 does a database rebuild, only the links to them get wiped because they are fake pkgs.

Senior Member
Contributor
Verified
@Leeful is there a way to see the games to be able to delete them? (The app.db only has ps4 games in it) and in the XMB or Library you can't see those games either?

Is the only way to remove them, if one wanted to, would be manually deleting the CUSAXXXXX folder manually? But then again that's not really getting rid of it, I mean used space-wise you would see the number change but would the system still have some residual ?

Hopefully someone might create an all in 1 PS4 Wonder GUI that restores databases but also like a "clean up" like what is really on the ps4 so you could select it and delete etc lol.
You must log in or register to reply here.
Share:
Facebook Twitter Reddit Email Link
Recent Articles
PS4 Syscon Loader Python Script for System Controller Files by SocraticBliss
Following the PS4 SysGlitch Tool and SysCon Glitching Pinout and his PS4 Unfself Tool, today PlayStation 4 developer @SocraticBliss is back with a PS4 Syscon Loader via Twitter tested with the IDA...
XNA RPKGMAN: XNA Remote Package Manager by Cypheron
Hey everyone, following PS4 PKG Sender v1.03 I have created XNA RPKGMAN: XNA Remote Package Manager which is a fully dynamic, lightweight package manager that only requires NodeJS/NPM and runs on...
Bad_Hoist PS4 Toolchain Porting Guide for Unsupported Firmware by Sleirsgoevy
Proceeding his PS4 ROP 8CC Port, Bad_Hoist 6.72 PS4 Webkit Exploit Port and preliminary Checklist to Port the Toolchain, today PlayStation 4 developer sleirsgoevy updated his Github repository...
PS4GDB Ring 0: GDB Stub to Debug PS4 Kernel by M0rph3us1987
Last month he shared a GDB Stub PS4 Port to Debug Userland Apps, and today PlayStation 4 developer m0rph3us1987 returns with a gdbstub_ring0.bin payload which is a PS4GDB Ring 0 GDB Stub for PS4...