Android App to Host PS4 4.55 Exploit and Payloads by Stooged

Then install the app and open it and at the top will be the address you need to connect to with the PS4.

Your device might ask you about installing an application from "unknown sources" this is ok to allow, it just means its not coming from Google Play.

You just select the payload you want to run in the app and then use the PS4 to goto the address that you see in the app.

To change the payload just select it in the app and then use the ps4 to revisit/refresh the address again.

you can add more payloads to the app you just plug your phone into your computer and copy any payload BIN file you like into the PS4_455_Payloads directory.

Right now the 4.55 exploit and hen payload are really unstable and you will have to try loading it again and again until the exploit works and payload injects properly.

You will get a lot of "There is not enough free system memory" errors, just select ok and keep trying

Once you fight it enough the payload will work and you will be able to install and play pkg games. 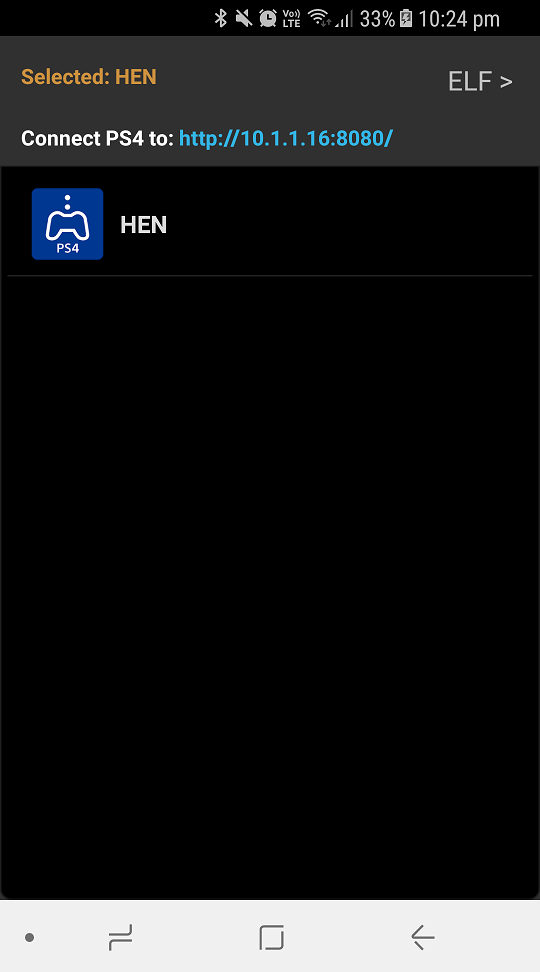 Member
Contributor
I don't know if it's just my setup, but I have game freezing issues in anything above 1.6 at the moment.

I went back to 1.5, and I haven't had these problems so far.

The updated exploit can cause crashes on certain games

Developer
Senior Member
Contributor
I am starting to think its a better idea to reverse the exploit setting so it uses the old one by default and you have to tick the box to use the new exploit.

After I kept getting the freezing issue (on the new exploit method), I went back to using the old exploit method, still with the new vortex hen file that came with the installer. (I made sure to delete the 4.55 payload directory before updating.) The issue didn't cease to happen.

Oh and, I get similar issues using the DNS method. (getting HEN online) / Again, 1.5 rocks.

Member
Contributor
Verified
somebody try this yet ?
https://github.com/pearlxcore/ps4-playground-455

Member
Contributor
Verified
been waiting for this thanks

I downloaded 1.9 version and installed on my phone with android 4.4.4. When i launch apk i have 6 options on screen.

Then i installed same apk (send from phone to tablet) on samsung tablet with 4.4.2 android, and when i launch apk i have only 5 options.

Here's the pictures, first is from mobile, second is from tablet, as you can see, same apk looks different on different devices ​
And picture from tablet Developer
Senior Member
Contributor
the HEN (holygrail) payload was included in an internal set of payloads which is written from the app to the PS4_455_Payloads directory on the very first launch of the app.

when xvortex updated his hen to 455 I removed HEN from the apps internal set of payloads.

if you install the new versions of the app on devices that have never had it installed on before you will find no HEN payload because its not a part of the internal payloads anymore.

what you are seeing with HEN missing is an intentional change I have made.
this is a snippet of the code that writes the payloads in the latest versions of the app, as you will see there is no HEN.

​
if you want the holygrail hen back you can add it to the PS4_455_Payloads directory.

I removed it because we have no source for it and its buggy.
You must log in or register to reply here.
Share:
Facebook Twitter Reddit Email Link
Recent Articles
LibOrbisNfs: LibOrbis PS4 Homebrew Userland Library LibNfs Port
Proceeding his OrbisGlPerf: OpenGL ES 2.0 Perf Sample, this weekend PlayStation 4 developer BigBoss made available on Github via Twitter a LibOrbis PS4 Homebrew Userland Library LibNfs PS4 Port...
New PlayStation VR (PS VR) Headset Rumored to Arrive in 2020
We've seen PSVR2 Concepts, next-gen PS VR2 Patents, Sony's Augmented Reality Wireless Headset and based on the latest rumors a new PlayStation VR (PS VR) headset may be coming to PlayStation...
Call of Duty: Advanced Warfare PS4 Mod Menu 1.23 is Now Available
Earlier this week we saw some GTA V PS4 Mod Menu 2020 Demos, and today PlayStation 4 scene developer @CustomHooker shared via Twitter a Call of Duty: Advanced Warfare PS4 Mod Menu 1.23 with help...
PlayStation Store's Totally Digital Sale Live with Savings on PSN Games
Get set to awaken a mysterious power within to save the world in Indivisible, make a daring escape with a little help from a friend in A Way Out or fight your way through the perfect run in the...