Category PS4 News       Thread starter PSXHAX       Start date Feb 20, 2019 at 5:01 PM       1,851       0
Building on their success with LittleBigPlanet, Media Molecule announced today that early access to the Dreams' Creator will launch this Spring on April 16th for those who enjoy making their own digital video game creations.

Below are some Dreams videos, and to quote from the official site on the upcoming PlayStation 4 title: "Dreams is a space where you go to play and experience the dreams of Media Molecule and our community. It’s also a space in which to create your own dreams, whether they’re games, art, films, music or anything in-between and beyond."

Early Access won’t have everything that the full version of Dreams will, but you’ll get 100% of the same Dreams tools that we have used every day at MM to make our content. As well as fun, deep interactive tutorials catering for all skill sets and levels and Mm-crafted arcade games ready to play and remix.

If you joined us during the beta period and published your assets, you’ll also have your beta creations to return to. Along the way, we’ll be adding more features, tutorials, arcade levels and assets during the Early Access period as we build towards the full slate of launch content.

Just like with LittleBigPlanet, we have always planned to evolve Dreams with the community and this is just the start. We’ll use Early Access to help us prioritize all the awesome stuff we’re already working on and get feedback as player needs develop and evolve.

With refinements, bug fixes and brand new features on the way, we are kicking off the live service side of Dreams so the community can get their first look at how we’ll continue to support the game.

Early Access is for creators who want to be part of the Dreams experience from the beginning. People who will create, play others creations, get involved in the social features of Dreams and give us feedback. If you are a creator, this is definitely for you. The Dreamiverse needs curators, tastemakers, and testers – this is a great opportunity to carve out your niche.

The most important thing is to know that the Dreamiverse is going to form around you, so if that gets you excited, Early Access is for you. If you participated in the beta and felt like Dreams wasn’t fully featured enough for you yet, or you wanted more Media Molecule game content, then Early Access might not be for you. We’re working on all those things during this period so that you have everything you need on your first day in the Dreamiverse.

Dreams Early Access is a strictly limited release to ensure that we have a chance to listen to all of you, so be sure to snag your copy as soon as you can!

We are very excited about going live this spring and updating you on all the magic happening in Mm Towers. If you want to be the first to get notified on the Early Access live date, sign up here for updates.

Early Access is exactly that. Early entry into Dreams, designed for creators to get hands on with the tools. It won’t feature everything that the full release will have (our story mode being a big piece of that) but you’ll get our full tool set for creating, our interactive tutorials and arcade games, templates and additional content created by Media Molecule and access to what you, the CoMmunity, made during our Dreams Creator Beta. You’ll also be getting the first hands-on with new features and content as we add them.

Which territories will Dreams Early Access be available for?

Initially, Dreams Early Access will be available in the US, Canada and all European territories.

What languages will be supported by Dreams Early Access?

At launch, Dreams Early Access will be in English and French in North America.

That’s an easy one! You’ll be able to purchase Dreams Early Access from PlayStation Store on April 16, 2019. 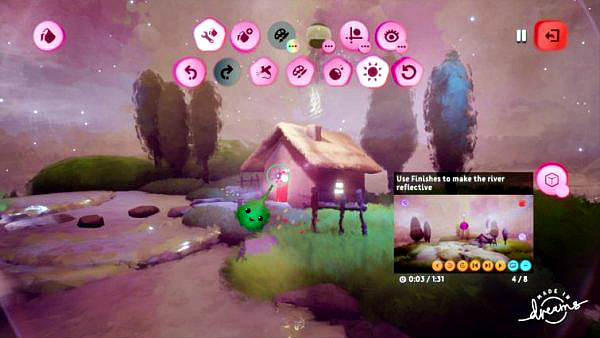