Download Links
This Updated Demo of Fursan al-Aqsa - Knights of al-Aqsa Mosque will allow players to have a taste of the Campaign Mode, which has a gameplay very similar to (and inspired by) the Classic Shooter Goldeneye 007, with many mission objectives to complete on each mission, such as destroying security cameras, sabotaging some Israeli equipment, finding documents that reveal more details about the game’s plot, planting bombs, invading Israeli bases, finding and murdering a specific enemy, rescuing Palestinian civilians, hijacking vehicles, taking down planes.

Adding to this, there is a Multiplayer Map, Battle of Negev Desert, so you all can revive the Golden Days of Split Screen Multiplayer Games.

On consoles (PS3 and Xbox360), the multiplayer mode works outside the box, as for PC, you need to have 2 Xbox360 Gamepads for PC. However, it works aswell with ANY PC Gamepad through the Xbox360 Controller Emulator, which is already included with PC Version.

All the intructions are there. The full version of this game will be released in January 2021, God's Willing

I hope you all enjoy this updated demo, as there is too much love, dedication and many sleepless nights spent on this project.

Assalamu Alaykum, may the Peace be upon You!

Note: There is a small bug in the game (which does not interfere with gameplay), it is a bug in the version of Unreal Engine 3 that I am using. Sometimes, when the player leans against some walls and tries to shoot, the projectile of the weapon is not launched.

To solve this, just tap in any direction (W, A, S, D, analog directional on PS3/Xbox360) and shoot again. This is because the starting point of the projectile launch in Unreal Engine 3 is calculated in relation to the position of the player's camera, and sometimes the camera is pressed on some walls when the player is too close, losing the starting point of calculation for launching the projectile. 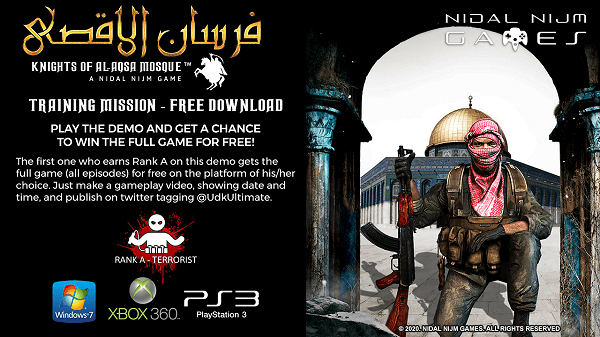 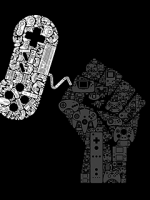 In this article I showcase the Gameplay Teaser for the 5th Mission of Fursan al-Aqsa, and other new updates for my game Fursan al-Aqsa - The Knights of al-Aqsa

After exactly 2 months of intense work, finally I finished the Gaza Strip Mission. It was, until now, the hardest mission to make. This mission introduces some brand new mechanics, like the Air Bombing, Civilians Rescue, and others.

I am very proud of the final results, and I am sure you all will enjoy playing this mission on the final game.

Also here you can see how the Air Strike works:

This is a very important update about the PS3 Version of Fursan al-Aqsa:

And here is the first Press Quote for my game, written by a professional gaming journalist. I provided him a closed beta of Fursan al-Aqsa with 50% of the game finished:

"Fursan al-Aqsa immediately harkens back to classic shooters - it always feels dangerous and tense. I'm really impressed with the quality of the animation - Ahmad's actions all look amazingly fluid and natural, even with the game's throwback vibe. This is a seriously terrific piece of work as well as an important perspective that we have never seen in a shooter before."

So that's all folks. My next step is to make an updated demo of the game, the final demo with all the improvements I implemented on the game, alongside some new maps,

Cheers and until next update.

After almost giving up the PS3 version of my game Fursan al-Aqsa: The Knights of the Al-Aqsa Mosque, because I could not get the all maps to run on it, I tried one last thing, after all the optimization I have done (compressing textures, reducing lightmaps...): I changed the PS3 video output resolution to 480p.

Now the game runs smoothly, at 60fps almost all time, except on Gaza mission, because there is a lot of stuff running on the screen. It seems that running the game at 720p or 1080p will use much more of the extreme limited video memory of the PlayStation 3 (256 MB).

I personally liked the image quality, even though it is not crispy as on the PC version. The image looks a bit pixelated and there is absolutely no AA (anti-aliasing), which made the image look like there is kinda PS1 image style filter applied over it. I simply loved it.

The PS3 version is exactly the same as the PC, just graphically inferior (some lower resolution textures). But I personally found the PlayStation 3 version more fun to play, because of the dual shock controller. Each gun triggers a different vibration style, which is very cool.

This is a sneak peek of what awaits you on this updated demo of FursanAqsaGame, Training Ops, which is coming soon to Steam.

This is the trailer I submitted to PAX EAST ONLINE, this year, in the hope that my game be selected for the showcase, so maybe I can get some media coverage for it. Let's see.