Check them all out below complete with trailer descriptions:

Join Mina and her best friend Michi as they travel through the seasons of a wonderfully colorful world, solving puzzles and challenging baddies along the way.

Together, they’ll uncover secrets, collect magical items and learn special abilities that allow them to reach exciting new places. Take control of Mina and Michi simultaneously, or play cooperatively with a friend!

The God of Mischief, Loki, makes his way to the Island and joins the Fortnite Crew in July 2021.

Initiate multiplayer matches straight from a persistent Game Base party and auto-invite everyone, no need to send individual invitations.

A modern warfare shooter set in the Middle East, play as Raven, Contract Sniper Assassin, as you take out a series of targets across a dramatic single-player campaign.

With extreme-range shots exceeding 1000m, gear up for the most challenging entry to the best-selling first person sniping series yet.

Test your skills in Curved Space, a unique take on the classic twin stick shoot ‘em up.

Curved Space is an intense arcade-style twin-stick shooter that takes the classic formula and plunges it into the weirdest reaches of space.

Battle cosmic space-invading spiders across curved landscapes where bullets hug the terrain while the horizon drops sharply out of sight.

Flatland - Vol.2 is out now! Help Square in crossing the most dangerous part of Flatland: the flooded wells in this fast-paced hardcore platformer game, featuring hand-crafted levels and Lightning-fast respawns.


Exploring PS5 Game Base: Stay In The Game

Access a dedicated hangout space for you and other players with your account for PlayStation Network. Share content, plan play sessions, jump into games, or just catch up. You can even access some features on the web and on mobile devices with PlayStation App.

It's finally here! Join Megapenguin on an adventure through the Dreamiverse and help tell the story alongside Media Molecule in this latest MadeInDreams collaboration project! AVAILABLE NOW in Dreams!

Parvos Granum and his loyalists are manufacturing a new breed of adversary: a sisterhood of elite warriors loyal only to the Corpus founder. Earn the legendary waverider Yareli and harness the devastating power of the sea to neutralize this latest threat and push back the Corpus.

Enter a revamped Lich system and battle Parvos’ fearsome femme fatales plus their robotic Hounds across both ground and Railjack Missions, and vanquish them to earn new top-of-the-line Corpus weaponry and Ephemeras. Defeat your Kuva Liches faster with a streamlined Murmur System, acquire new Weapons from Void Storms and the Steel Path thanks to a restructured Reward System, and explore new Customizations and gameplay refinements that continue to evolve, grow and improve the Origin System.

Game creators can build their PS5 games so you can jump straight into specific missions, modes, quests, and more straight from the console's Control Center.

Wield the awesome power of the DOOM Slayer like never before with DOOM Eternal’s free next-gen upgrade today!

GreedFall Gold Edition, the definitive way to experience the beloved fantasy RPG adventure from Spiders Studio and Focus Home Interactive is out now, with up to 4K UHD, fast loadings and enhanced performance on PlayStation 5!

The Gold Edition includes the base game and new expansion: The De Vespe Conspiracy. This expansion brings new enemies and gear with a twisting narrative that expands on GreedFall’s acclaimed story. Watch the new trailer and dive into GreedFall's most complete edition today!

The beloved RPG adventure gets a brand new expansion!

The De Vespe Conspiracy expands on GreedFall’s cherished world and story, inviting you to set foot on a previously undiscovered region of Teer Fradee and tackle a brand new intrigue.

Navigate a web of lies, manipulation and secrets, as you unravel a nefarious conspiracy that threatens the balance of power. Explore an uncharted region of the island, battle strange new beasts and face off against a villainous new enemy faction in your hunt to uncover the truth.

GreedFall is now available on PlayStation 5! Forge your own destiny, enjoying up to 4K resolution, highly improved visuals, fast loading, and 60 FPS in performance mode, with free migration and save files transfer for owners of the game on PS4.

GreedFall: Gold Edition and The de Vespe Conspiracy expansion are out now on PS5 and PS4.

A unique explosive mixture of platformer and arkanoid! Hit the ball! Move around, jump! Smash the bricks! Destroy the enemies! Destroy everything destroyable!

If you are a lover of platformer or arkanoid, if you love solid complexity and have stamina - this game is for you. If the last two points are not about you, the game also provides an easy mode.


Destiny 2: Season of the Splicer Solstice of Heroes PS5 Trailer

The Last City of humanity is built, not from iron and stone, but of heroism and bravery. Join your fellow Guardians and remember those who stood in defense of our home. Eva Levante awaits you in the Tower with words of gratitude and the promise of celebration.

Join high-flying fireteams as you soar across the European Aerial Zone in search of glory and treasure. The sky’s the limit on how many bosses you defeat and how many caches you unlock. Well... the sky and the clock. Make haste, Guardians.

Earn class-specific Solstice armor and improve its quality by adventuring through a variety of objectives. Once fully upgraded, the glow from this Legendary armor will guide your fireteam through even the darkest of nights.

Online players can view a party member's screen, and even play their own game while watching them at the same time.

Alibi's got your six in R6Extraction. Fool the archaens with your Prisma Holograms and never get taken by surprise.

A quest around four kingdoms, colored by the seasons!

In a world with four kingdoms, each colored by a season, where roles are granted by the Quadeities, strange happenings suddenly threaten the peace there. A quest begins to find each one's calling in this intrigued fate and journey through the kingdoms to get to the bottom of the mystery!

Make use of up to three roles per character to enjoy the variety in skills, effects and even costumes. In turn-based battles you can charge special orbs to use Act Over and launch up to four continuous actions. It's fun just to watch the charm of pixel arts in this fantasy JRPG! 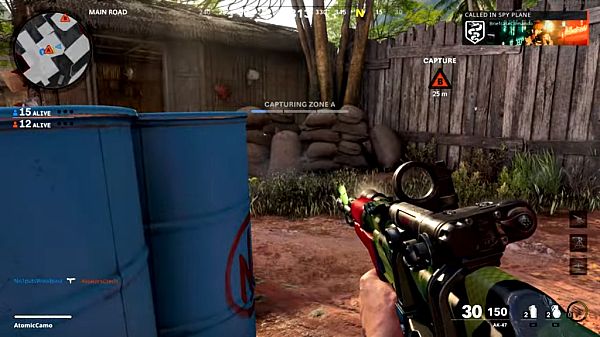