Like Santa flying off into the night bidding everyone farewell, Red-EyeX32 also let sceners know, to quote: "This is probably going to be my last release ever."

To quote from the README.md file: OrbisTitleMetadataDatabase

This software is provided 'as-is', without any express or implied warranty. In no event will the authors be held liable for any damages arising from the use of this software.

Permission is granted to anyone to use this software for any purpose, including commercial applications*, and to alter it and redistribute it freely, subject to the following restrictions:
Contact must be made to discuss permission and terms.

4.05 offsets to decrypt SOME usermodules, patch the following entries:

Code:
Correct patches to enable mmap of all SELF (discard previous patches):

Code:
PS4 themes are interesting: they're driven by a basic scene definition (in XML) which points to models (MDX files) and textures (DDS files). The scene definition defines what objects are where and how they animate. And images for UI icons too.
When you have a theme active, they're mounted to /mnt/sandbox/pfsmnt like games are, so you can look at their files the same way as everything else.
Thanks to both @raedoob and @Wultra for the heads-up on this news in the PSXHAX Shoutbox earlier tonight! 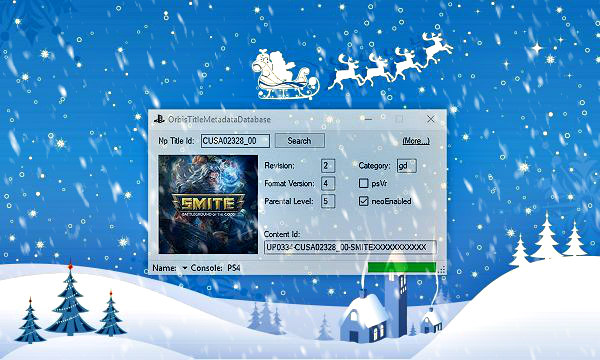 Senior Member
Contributor
is there any way to copy my old save data to ps4 ? without sign in to psn im on 4.05

Senior Member
Contributor
Verified
great! "things are getting better all the time!"

Member
Contributor
what is the usage of this patch guys!

Staff Member
Moderator
Contributor
Verified
They are for developers to be able to decrypt some of the PS4 4.05 filesystem usermodules... for the rest of us, just cheering them on.

Senior Member
Contributor
u mean we will see newer games work on 4.05 ^_^

Staff Member
Moderator
Contributor
Verified
I think we covered this before, but for those who missed it when THESE things happen then we will, for now all we can do is root for the PS4 Devs and download away.