Our PlayStation VR holiday deal was such a popular promotion, we’re bringing it back to our fans. From Sunday, February 18 through Saturday, March 3, 2018, PS VR standalone headsets and bundles will start at $199.99 (MSRP).

It’s a great time to pick up the PlayStation VR Doom VFR Bundle, which comes with a PlayStation VR headset, PlayStation Camera, the PS VR Demo Disc 2.0 and the Doom VFR Blu-ray Disc. Doom VFR brings the fast-paced, kinetic gameplay fans of the series love as an all-new virtual reality experience. From an entirely new perspective, Doom VFR transports you to the UAC facility on Mars and the depths of Hell, as your skills are put to the test through intense combat. $299.99 MSRP (regularly $399.99 MSRP).

This PS VR promotion is available at participating retailers in the U.S. You can find more information here.

This deal comes at such an exciting time for PS VR, with recent launches such as The Inpatient and Accounting +, and upcoming titles like Moss, Bravo Team, and more! There are more than 150 games and experiences available that are compatible with PS VR, and more than 130 highly anticipated games and other entertainment content expected to launch by the end of this year. There is so much to look forward to for PS VR this year and we can’t wait for you to experience it for yourself. 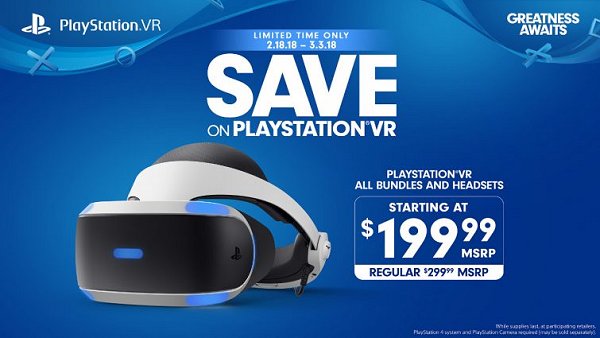 Member
Contributor
Verified
Good deal for the price. I wonder if it's the v2 or v1 (v1 = with the thicker wires)..

Member
Contributor
These companies love producing sales during the specific time of the year when no one has the money for it. LOL They should be doing this during the summer or fall.

Member
Contributor
They do, it's called "Black Friday" and "Cyber Monday"

Staff Member
Moderator
Developer
Senior Member
Contributor
Verified
Is there a way to tell what firmware these come with.

Senior Member
Contributor
Meanwhile in the UK we get to pay the equivalent of $400 for the headset only.

jwooh said:
Is there a way to tell what firmware these come with.
Click to expand...

I was about to ask the same thing....

Staff Member
Moderator
Developer
Senior Member
Contributor
Verified
@subcon959 Man that's high maybe you can get someone from the states to buy you one and ship it to you.

@nikeymikey I hope there is a way to tell on the box or something.

Member
Contributor
Very good deal for US. Do you believe sth like that will happen in Europe? It costs near 350 euro now

Mega Man Zero/ZX Legacy Collection...
Golang Library to Read PS4 Controller Evdev Events by Mrasband
Since covering the PyPS4Controller Linux Module in development, this weekend mrasband made available a Golang Library based on the Go Programming Language designed at Google to read PS4 DualShock...
AppendumPS4 v2.00 for PlayStation 4 v5.05 Preview by DeathRGH
Proceeding the AppendumPS4 v1.0 release, this weekend PlayStation 4 developer @DeathRGH shared via Twitter a preview of the AppendumPS4 v2.00 mod menu in development on his YouTube Channel.