The Competition Center is the one place that you can go to view exclusive content, tips and tricks of your favorite games from some of the best players in the world, and live coverage from some of the biggest esports events. The various types of competitive and unique content include:
Simply choose the games you care most about and the Competition Center will take care of the rest, making esports and competitive gaming content super easy to find.

The Competition Center is also the best way to access PS4 Tournaments by recommending online competitions that you can join. We provide live tournament standings and brackets so you know how you’re performing at any given time.

Additionally, when you sign in with your PSN ID, you will know which tournaments your friends have registered for so that you can join them.* This makes the Competition Center the perfect resource when you’re playing in the PS4 Tournaments: Challenger Series. Since August, we’ve launched this tournament series with games like Mortal Kombat 11 and Injustice 2, with more AAA titles coming soon.

*Account for PSN required for single sign-on and curation features. 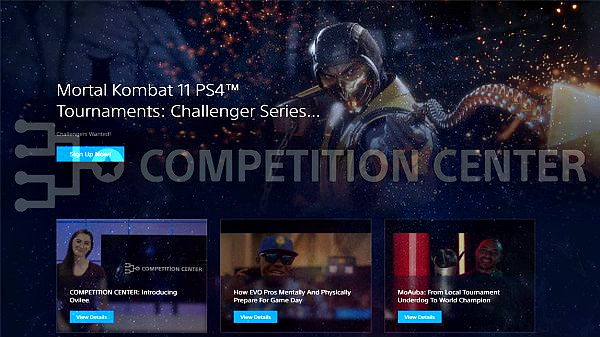 Member
Contributor
Verified
Thanks for the info..

Member
Contributor
Verified
They better bring this worldwide instead of just US!