Check it out below, and from their official site to quote: PS4 Remote Play

Play your favorite games on PS4 and PS4 Pro, pause the action and switch to another device on your broadband network, without being tied to the TV. With PS4 Remote Play you can:
Download the Free PS4 Remote Play App Now
Stay in Control

Switch from playing on your TV screen to any compatible iOS or Android device without leaving your game, thanks to DUALSHOCK 4 wireless controller support.

What is PS4 Remote Play?

PS4 Remote Play for PS4 lets you stream and play your PS4 games, switch between games, view your PS4 home screen and browse the console’s menus, on any compatible device that’s connected to your broadband network.

Make your PS4 adventures hand-held with PS4 Remote Play for PS Vita (updated with system software 3.00 or later). The game controls are re-mapped for the PS Vita system, letting you seamlessly switch without missing a beat. You’ll find the PS4 Remote Play app on your PS Vita home screen.

Stream your PS4 games to any other TV in your house, with the sleek PlayStation TV device, connected to your home WiFi network. You’ll find the PS4 Remote Play app on your PS TV home screen. 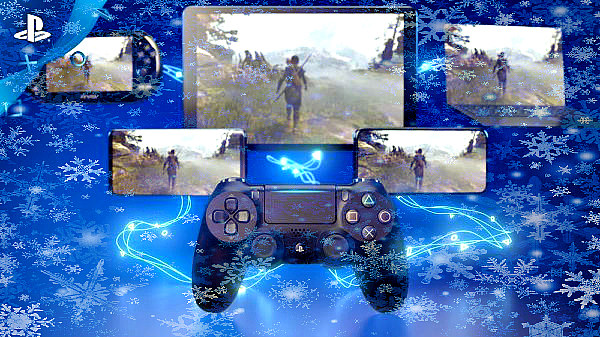