Here's more about each title from Senior Manager of Game Services Content Adam Michel, to quote:

As humanity stands on the brink of extinction, a hardened few band together to defeat the undead masses threatening our way of life.

Take on huge zombie swarms in story-driven campaigns set in the same world as the hit film, fully playable in online co-op for up to four players. You can also choose to fight other players for survival in a range of intense Player vs Player vs Zombies game modes.

Available on PlayStation Now until September 6, 2021

Strap yourself into the cockpit of some of the world’s most formidable fighter planes and skim through the clouds engaging in daring aerial stunts and nerve-shredding tactical dogfights. Immerse yourself in a unique alternate reality where real-world, current, and near-future military hardware meet.

Choose from an array of authentic modern and futuristic aircraft and load them up with an arsenal of cutting-edge super weapons as unfolding events drive you into ever more dangerous aerial face-offs. Ace Combat 7 also includes exclusive PS VR-compatible missions to create anew level of death-defying immersion.

Available on PlayStation Now until May 31, 2021

From the creator of Ghost of Tsushima comes a superpowered action adventure set in modern day America. Delsin Rowe’s superhuman power is in your hands.

Push your awesome abilities to the limit and see how your choices affect the city of Seattle and the people around you: hijack the powers of other superhumans, soar across the Seattle skyline and choose how your own story plays out.

Blurring the lines between cautious strategy and unbridled mayhem, Superhot is the FPS in which time moves only when you move. No regenerating health bars. No conveniently placed ammo drops.

It’s just you, outnumbered and outgunned, grabbing the weapons of fallen enemies to shoot, slice, and maneuver through a hurricane of slow-motion bullets. 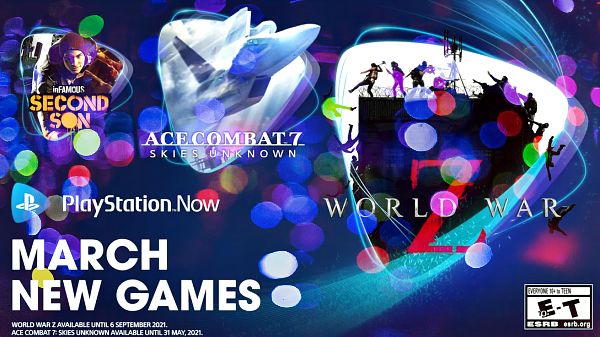 Developer
Senior Member
Contributor
Verified
PSNow is pretty much only useful for exclusives, thats how i got to play a couple before i had a ps4 and played spiderman before 6.72 came too
Those arent that massive titles but eh
You must log in or register to reply here.
Share:
Facebook Twitter Reddit Email Share Link