Below is what he had to say on PS Blog this morning, to quote: "We have some unfortunate news to report that a number of copies of Uncharted 4: A Thief’s End were stolen while in transit.

While we are continuing to work with the police to resolve the matter — which is the subject of an ongoing criminal investigation — it appears that a few copies of the game have surfaced in the UK. 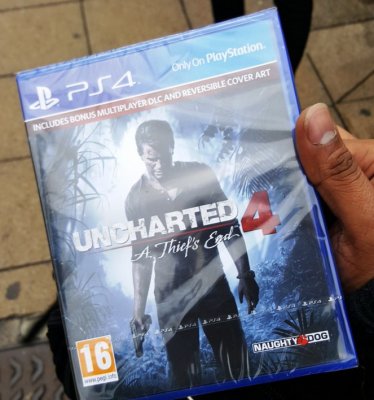 We know that very many of you have been looking forward with great anticipation and excitement to the latest masterpiece from Naughty Dog. From what I have played of Nathan Drake’s latest adventure, I can tell you that it is very much worth the wait.

As with most Naughty Dog games, the unfolding story is such an integral part of the experience and for this reason we wanted to warn you to beware of the potential for spoilers to be posted by people with access to stolen copies of the game. 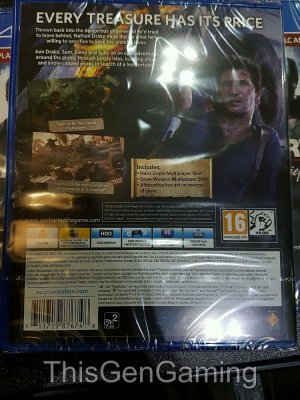 An extremely talented team has worked long and hard to bring Nathan Drake’s greatest adventure to life and we would urge you to help us prevent this from being spoiled by not purchasing copies of the game ahead of the launch date.

Please rest assured we will be very vigilant to protect you from this as far as we can so you can enjoy Uncharted 4’s experience to its fullest on May 10."


Thanks to ThisGenGaming.com for the back cover box art image.

As of yet I haven't seen a PS4 scene release of it, although I didn't look very hard either but odds are it won't be long 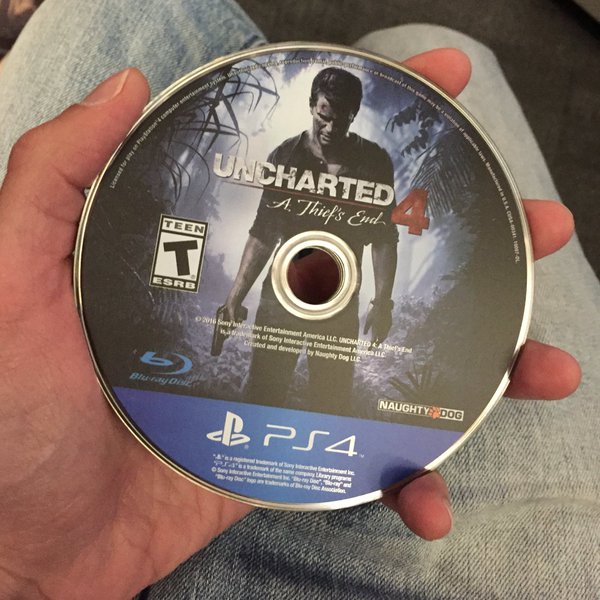 Senior Member
Contributor
Exactly! hey has anyone else been getting less email notifications than they SHOULD be getting!? @PSXHAX What about you?? I'm only recieving them for one topic for the last 4 days.. The Dev menu on Retail PS4 Enabled Topic!! WHY?? Check your AdminCP Panel Please and see if something is wrong... or if it's just for my account? is it server related?

Additinally I am watching all of the popular forums. so i don't know what the problem is.

B7U3 C50SS said:
Exactly! hey has anyone else been getting less email notifications than they SHOULD be getting!? @PSXHAX What about you?? I'm only recieving them for one topic for the last 4 days.. The Dev menu on Retail PS4 Enabled Topic!! WHY?? Check your AdminCP Panel Please and see if something is wrong... or if it's just for my account? is it server related?

Additinally I am watching all of the popular forums. so i don't know what the problem is.
Click to expand...

I don't use email notifications myself, but I will check the settings in a bit for them

PSXHAX said:
I don't use email notifications myself, but I will check the settings in a bit for them
Click to expand...

Right but i'm also not getting any alerts for the most part just on the site for forums i watch. And that's bugging me not even in email alerts. Thanks bro.

Staff Member
Moderator
Contributor
Verified
Ok, check the following (or ensure they are checked) on these pages:

"The account preferences, once applied, are from that point on for any threads they aren't currently subscribed to."

So if you have some of the boxes unchecked and check / save them, it will be from that time onward that you'll receive emails (not for past posts / replies).

Give that a try and report back, the reason we don't have them all enabled by default is because it would be more load on the server sending out mass e-mails to all users each time a new post / thread is added.

Senior Member
Contributor
The only thing out of all three pages that needed fixing was this.. the boxes that needed checking here. so maybe it's server overlaod? i dunno. it only started in the last 5 days..

Staff Member
Moderator
Contributor
Verified
Well, I checked the server logs (no errors) and also the loads (nothing above normal for the last 24H) so we'll see... one thing it could also be are the e-mails going to a filtered spam / trash folder.

If you still have issues (since changing the settings) we can definitely troubleshoot it further... if possible it would also help to whitelist the following email address: psxhax AT gmail.com as that is where they are sent from not a domain-based email address.
You must log in or register to reply here.
Share:
Facebook Twitter Reddit Email Link
Recent Articles
Nanospeed Gamer 1.0 The Videogame PS4 PKG by LapyGames
The PlayStation 4 homebrew keeps flowing from scene developer @Lapy, and following Super Console Wars 1.0 comes Nanospeed Gamer 1.0 The Videogame PS4 PKG by LapyGames (PayPal for supporting his...
OrbisSWU: The PS4 Update Tool Developer Research by TheoryWrong
As mentioned previously, following Fail0verflow's Documentation, the PS4 NoBD Updating Method, his PS4 Updater Toolkit release and the PS4 RL78 Syscon implementation PlayStation 4 scene developer...
Sony CEO Jim Ryan States PS5 Price Won't be the Lowest, Reflects Value
With their official PS5 Gaming Showcase set to be unveiled next week, Sony Interactive Entertainment president and CEO Jim Ryan revealed in an interview that the PlayStation 5 Price won't be the...
PlayStation 5 Unveiling Next Thursday, Limited Backwards Compatibility?!
Although not likely to be as next-gen as this PS5 Concept Video for the DualSense PS5 Controller, today Sony finally announced their next-generation PlayStation 5 console unveiling will take place...