Below are the related PS4 / PS5 trailer videos with further details from Writer Daniel Noel via PlayStation Blog, to quote:

Old loyalties bite the dust as our Operators form new factions in search of riches beyond their wildest dreams. Money talks in Mercenaries of Fortune, the fourth season of Call of Duty: Vanguard and Call of Duty: Warzone, bringing with it a host of new content, including new maps, new weapons, new Operators, 100 Tiers of Battle Pass content, and more.

In this winner-takes-all arena, will you come out on top? Find out when Mercenaries of Fortune launches on PlayStation on June 22.

A mercenary hideout built atop an otherwise peaceful town with a rich history, Fortune’s Keep is a completely original Resurgence map created by High Moon Studios. It is roughly the same size as Rebirth Island and features four distinct points of interest:

Inspired by colorful Mediterranean villages, this seaside community is littered with cobblestone alleyways and flat rooftops to traverse. An old fortress sits in the town’s center, inviting Operators in for intense combat with its bell tower that commands this section of the map.

True to its name, Smuggler’s Cove is loaded with supplies, including Gas Masks that can be helpful in case of a circle collapse. Be prepared to explore the twisting Sea Caves, Grottos with sunlight shining in from above, a small collection of fishing huts, and a lighthouse.

The island’s namesake, the Keep is a medieval fortress converted into a mercenary headquarters and hideout. Walk on the ramparts and take to the watchtowers to defend the area from invaders, but know that they can also easily fly over the walls using nearby Redeploy Balloons or sneak into the area using the island’s tunnel system.

A laid-back complex inspired by traditional three-lane maps, the Winery provides plenty of scavenging opportunities. Head to the Cellar to stock up on supplies, or travel to the nearby Camp, which contains a helipad and multiple military tents.

Fortune’s Keep also brings new challenges. Accept a Black Market Run Contract for the chance to purchase items not available at normal Buy Stations like the Sequencer Grenade and the Nebula V Minigun. In Cash Extraction, ambush a mercenary group and grab their gold before they take it off the island for good.

Originally in Verdansk, Storage Town comes to Caldera and is located between the Mines, Airfield, Village, and Dig Site. Search the sprawling complex for Contracts and items and use its newfound verticality to quickly traverse the map.

Expect over a dozen other Point of Interest changes across Caldera, partially due to new mercenary camps cropping up. Could they be searching for the rumored Mercenary Vaults?

Hop into the new Armored SUV when you need to travel through enemy-occupied territory. This vehicle features a mounted driver’s weapon, a dedicated rooftop turret seat, the ability to drop proximity mines, and a Nitro Boost for rapid acceleration.

Hit up ATMs in Plunder game modes to acquire bags of gold that periodically spawn nearby. Gold will spawn up to a maximum amount.

Disable vehicles and disrupt enemy players and AI using the EMP Grenade, a nonlethal tool that creates a short-lived area of effect when it explodes. Affected players are stripped of their HUD information, while vehicles are momentarily powered down.

A reimagining of the USS Texas map from Call of Duty: WWII, USS Texas 1945 is a medium-sized map that’s moved from the white Cliffs of Dover to the waters around Caldera. Fight it out on a battleship designed for tense long-range engagements on starboard and port, and get plenty of close-quarters action amid its many confined interior locations.

Deploy to a Pacific listening post in this small-to-medium-sized map set in a dense village littered with destruction. Large mountains and a vast landscape engulf the environment as you battle around the central building and along its creekside fortifications.

Gun Game makes its Vanguard debut this season in a new variant utilizing various Weapon Blueprints. Be the first Operator to progress through all 18 weapons to win the match. Eliminate an enemy to cycle to the next weapon. Melee an enemy to set them back one weapon and get the final Throwing Knife elimination to secure victory. No Perks, Killstreaks, or custom Loadouts allowed.

Mercenaries of Fortune also brings a fresh season of Ranked Play. Climb the ladder as you battle other competitors and earn new seasonal rewards for your efforts.

Following its original release in Call of Duty: World at War, the Zombies map Shi No Numa returns in the first classic round-based experience for Vanguard. Team up and survive the swamps in this updated version, featuring new quests, a Wonder Weapon, fresh intel, and more. Experience the map through Vanguard’s unique features like the Altar of Covenants and the Tome of Rituals.

The Mercenaries of Fortune Battle Pass offers 100 Tiers of new content, including two new free weapons: the Marco 5 SMG and the UGM-8 LMG.

This is the perfect SMG for aggressive players who stay on the move. Best when fired in close range from the hip, it’s also the first SMG in Vanguard to feature the Akimbo Proficiency. Now we’re really talking.

The UGM-8 combines mobility with firepower for Operators to keep pace with their teammates while offering suppressive fire. Use Gunsmith to further lean the weapon toward power or speed and find the balance that works for you.

Purchase the Mercenaries of Fortune Battle Pass to get Task Force Immortal Operator Captain Butcher instantly at Tier 0. Appearing later in the Store are the other two Immortal Operators, Callum Hendry and Ikenna Olowe.

Earn two more weapons — the Push Dagger and the Vargo-S Assault Rifle — by completing their in-game challenges or by purchasing their corresponding Store Bundles later in the season.

Get the PlayStation Exclusive Combat Pack

Gear up with the Mercenaries of Fortune Combat Pack, free for PlayStation Plus members in Call of Duty: Vanguard and Warzone.

This season’s Combat Pack includes the Legendary Overprepared Operator Skin for Isabella, the Legendary Expeditionary Force and Ancient Ruins Weapon Blueprints, an Epic Watch, a Charm, an Emblem, a Sticker, a Calling Card, and a 60-minute Double XP Token.

Prepare for all this and more, including the Mercenaries of Fortune event, the Golden Plunder limited-time mode, plus the midseason arrival of two very special action icons, when the new season arrives on PlayStation on June 22. Rise on every front. 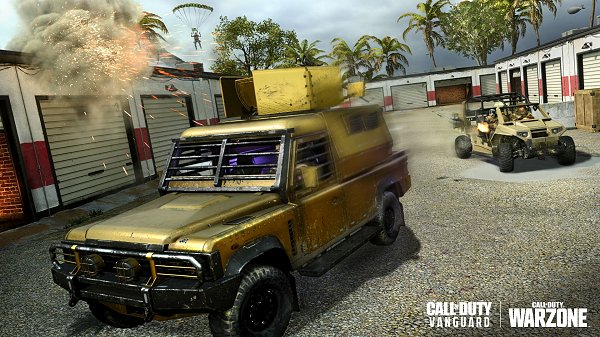 Member
Contributor
Well this is exciting!

Member
Contributor
Verified
Thanks for the post. It is amazing news!