From the README.md, to quote: Chiaki

Disclaimer: This project is not endorsed or certified by Sony Interactive Entertainment LLC.

Chiaki is a Free and Open Source Software Client for PlayStation 4 Remote Play for Linux, macOS, Windows and potentially even more platforms.

Everything necessary for a full streaming session, including the initial registration and wakeup of the console, is supported. The following features however are yet to be implemented:
Downloading a Release

Builds are provided for Linux, macOS and Windows. You can find them here.
Building from Source

Dependencies are CMake, Qt 5 with QtMultimedia, QtOpenGL and QtSvg, FFMPEG (libavcodec with H264 is enough), libopus, OpenSSL 1.1, protoc and the protobuf Python library (only used during compilation for Nanopb). Then, Chiaki builds just like any other CMake project:

Starting with PS4 7.0, it is necessary to use a so-called "AccountID" as opposed to the "Online-ID" for registration (streaming itself did not change). This ID seems to be a unique identifier for a PSN Account and it can be obtained from the PSN after logging in using OAuth. A Python 3 script which does this is provided in scripts/psn-account-id.py. Simply run it in a terminal and follow the instructions. Once you know your ID, write it down. You will likely never have to do this process again.

This project has only been made possible because of the following Open Source projects: radare2, Cutter, Frida and x64dbg.

Also thanks to delroth for analyzing the registration and wakeup protocol, as well as a huge thank you to FioraAeterna for giving me some extremely helpful information about FEC and error correction.

This program is free software: you can redistribute it and/or modify it under the terms of the GNU General Public License as published by the Free Software Foundation, either version 3 of the License, or (at your option) any later version.

This program is distributed in the hope that it will be useful, but WITHOUT ANY WARRANTY; without even the implied warranty of MERCHANTABILITY or FITNESS FOR A PARTICULAR PURPOSE. See the GNU General Public License for more details.

You should have received a copy of the GNU General Public License along with this program. If not, see https://www.gnu.org/licenses/. 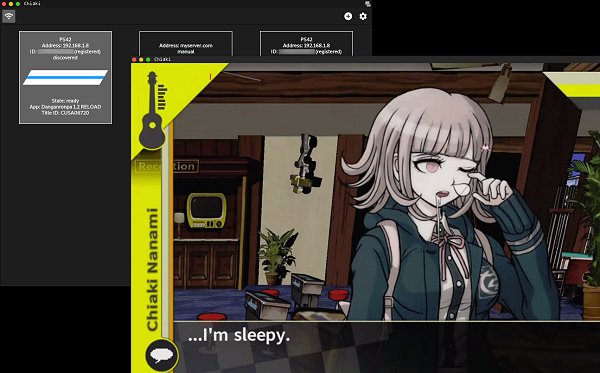 Senior Member
Contributor
Verified
Hey! Thank you very much, I hope some version for Android comes out.

That said, thanks. Greetings.

Member
Contributor
Verified
It works and that's amazing, but the video/audio quality is lower than the ps4 remote play. I only test it on a normal ps4, maybe on ps4 pro is better.

Member
Contributor
Can it work for those who use hen and have never logged in with psn before?

Senior Member
Contributor
Verified
when i try to open it it says entry point not found
any ideas?

Senior Member
Contributor
Verified
I have a question does the ps4ren payload last forever or i have to do it everytime i turn on ps4 ? because i tried it when i turn off ps4 it revert back to original no remote play that requires psn

Senior Member
Contributor
Verified
It's only once, mate.

1. Turn on the PS4 and run REN only.
2. Once the sign that has been activated comes out, you click the circle (O) until you exit the browser.
3. You go to the Remote Use Connection Settings zone
4. You should enter without problem thanks to the REN. Then you will see the code that you should use in the peripheral that you are going to use with Remote Play.
5. If it is in WINDOWS you should use PS4 Remote Play and the MysteryDash patch called Offline-PS4-Remote-Play. You login only once, you give Manual Connection and enter the code that PS4 gave you.
6. Once you can visualize the screen of your PS4, you go to it and restart it so that the REN payload is deactivated.
7. From then on you just have to open PS4 Remote Play on your WINDOWS and connect it once the PS4 is already on and functional and wait for it to load.
8. Remember to have a good bandwidth to connect to the first one.

P.S. Sorry for my English, it's not my native language.

Member
Contributor
Why devs hate explain how their program works to newbies?