Enshrined Packs are live with the first ever DM Invincible cards. Run with this year's HOF Class including DM Invincible Kobe, Duncan, and KG. We got Hall of Famers featured in this pack including: DM Magic DM Julius Erving DM Ray Allen And more Available until May 24th

Let loose the Goose when Mighty Goose releases on PS4 and PS5 on June 5th! Mighty Goose is a fast paced run & gun shooter starring a bounty hunter Goose. Use epic weapons and devastating war machines to battle against screen filling bosses and hordes of enemies!

Watch the new gameplay trailer of Aeterna Noctis, the challenging 2D Metroidvania that will be released on PS5 and PS4 on 15th December 2021.

The May update for World of Warships: Legends arrives with a bang! Get ready for the ultimate titan battle with Godzilla vs. Kong, alongside new bureau projects, a new campaign, and more. Check out their new trailer for more details!

Final Fantasy XIV: Endwalker is coming to PS5 and PS4 on November 23, 2021! Yet shadowed by their triumph in the First, the Warrior of Light and Scions of the Seventh Dawn are home at last. An even greater calamity than refulgent oblivion has been building in their absence, however─a second advent of the Final Days.

Should all despair, the myriad conflicts that now ravage the land cannot but foretoken an end to life in the Source. Take heart in the faith of those who walk beside you, and journey ever higher─to the very stars above.

Protect the last living human in Void Terrarium++, available now! Experience this grim yet moving tale, now with new outfits, hairstyles, diseases, and an all new environment to explore! Available now for PS5!

Welcome to Zurkon Jr's Almost Launch Party! In this first of three videos, Junior shares some of the weapons and traversal techniques in Ratchet & Clank: Rift Apart. Zap, freeze, bounce and blow your enemies away with this loaded arsenal. Feeling the power through the DualSense Wireless controller.

Join Game Director James Anderson from Ratloop Games Canada and Senior Community Manager Jens Erik Vaaler from Frontier as they give you the inside scoop on Lemnis Gate, how it plays, and the world the game is set in. Coming to PS5 and PS4 this Summer

Available on May 18. Become a Ninja in feudal Japan and prove your skills in the art of infiltration, sabotage and assassination. Chess Knights: Shinobi is an original turn-based puzzle game inspired by Chess.

Using chess Knights, you need to move through the board until you reach the squares where your other pieces are held prisoner. Then, comeback to the safe zone without being captured by enemy pieces to rescue all your pieces!

Sumo Digital Design Director Jack Houghton showcases five exclusive Sackboy Knit-Speedrun Challenges costumes inspired by the legend of the Knitted Knights. Get a taste of future challenges, then start your run to complete the set.

Play as Guy, a simple peasant man with simple dreams of wreaking medieval mayhem, when Rustler launches on PlayStation 5, PlayStation 4 on August 31.

Soar through the skies aboard a majestic warbird, explore a stunning oceanic world and engage in epic aerial dogfights in The Falconeer, a BAFTA nominated air combat game from solo developer, Tomas Sala.

Who will you choose? Seven iconic drivers, five World Champions, and a staggering 16 championships between them. Introducing the full roster of additional My Team drivers available in F1 2021 digital Deluxe Edition:
These carefully chosen Icons have been added to the driver market. If you can meet their expectations and salary requirements, they are available to join your team, allowing you to level up and create the greatest ‘My Team’ line up ever.

My Team is our driver-manager feature that allows you to create a new Formula 1 team and take your place on the grid alongside the established 2021 driver line-up.

The countdown begins in the new Limited Time Mode for Zombies Onslaught in Call of Duty: Black Ops Cold War. Try your luck at this undead challenge to win the grand prize

Lace up... The Crossover is going to knock you off your feet.

Necromunda: Hired Gun unveils electrifying new trailer starring man’s best friend Necromunda: Hired Gun, the fast-paced, thrilling FPS by the small passionate team at Streum On Studio, welcomes you to the nefarious city of Necromunda, a wild place where anything goes - for the right price.

As a rugged bounty hunter in this utopia of violence, make a living taking contracts and using the many tools in your deadly, sometimes friendly, arsenal to see them through in style.

Watch today’s Friends Forever trailer to get your blood pumping in expectation of Hired Gun’s official digital release on PlayStation 5 and PlayStation 4 on June 1st.

Welcome back to Zurkon Jr's Almost Launch Party! The second of three videos focuses on the planets of Ratchet & Clank: Rift Apart. Thanks to the power of the PlayStation 5 console, the worlds in Rift Apart are more alive than ever.

As Junior so eloquently puts it, "It's GORGEOUS! Just look at it!" Ratchet & Clank: Rift Apart arrives exclusively to PS5 consoles on June 11, 2021. Pre-Order Now.

"You have been deemed non-compliant and your identity has been forfeit" FORECLOSED releases on PS4 and PS5 on August 12th! FORECLOSED is a narrative-driven action-adventure set in a Cyberpunk world filled with action, suspense, and experimental augmentations.

Follow the story of Evan Kapnos in this sleek comic book styled game as he unravels the conspiracy behind his identity foreclosure. Who is responsible and why?

For Episode 3 of PSNextGenIcons, Manny is joined by Alphonso Davies of Bayern Munich and Callum Hudson-Odoi of Chelsea. We get the the lowdown on everything from their epic Champions League stories to their worst dressed team-mates, all whilst they battle it out in our PS5 challenge.

Welcome to a new kind of dodgeball in Knockout City. Join the brawlfest during the limited-time Block Party and be ready for Season 1.


Back 4 Blood Meet The Cleaners PS5

A video asset that showcases the Characters and some of the zombies in the game. Goal is to familiarize the fanbase with each of the characters.

Make sure the spotlight stays on you with the Mirage Edition, jam packed with items that’ll take your look to the next level. There’s a new sheriff in town and he looks really really shiny.

Get ready to lay down the law in style with the Mirage Edition.
It’s got everything you need to let the competition know you’re not all hat and no cattle. You can find the Mirage Edition on PlayStation 4, PlayStation 5 or get a download card at your favorite retailer soon for $19.99. Here’s everything it’s packing:
Apex Legends is a free-to-play hero shooter game where legendary characters battle for glory, fame, and fortune on the fringes of the Frontier. Play for free now on PlayStation 4, PlayStation 5.

The Red Room Takeover Event and the new Champion System have now been implemented in Marvel's Avengers. Survive hacked HARM Rooms to test your spy abilities until May 31. Earn XP on Level 50 Heroes to unlock Champion Skills for more customization.

1 school + infinite tracks + tons of cars = endless fun! Discover the College Campus and build your tracks among the classroom, the lab, and the library.

From secluded locations to deep-sea inspirations, the game director of Returnal lets us in on his creative process for the PS5 bullet-hell shooter. Returnal is available now on PS5.

Gutwhale is a finite roguelite about managing the space between you and your ammo, while fighting your way through a digestive system! Descend down into the guts, try to keep your ammo close, unlock weird hats and get crushed by a van! Out NOW! 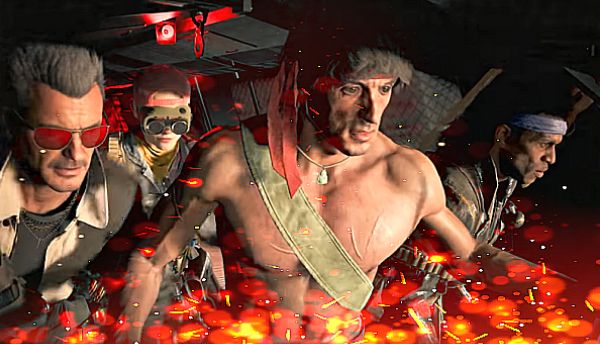