Earlier this week we saw his 1Click PS4 Update PKG Downporter, and today PlayStation 4 developer @noob404 returns with two more releases... the first being the Noob404 1Click PS4 Batch Downporter to downport multiple PKGs in 1 click with a video guide from his YouTube Channel below.

With the 1Click PS4 Downporter v3 and 1Click PS4 Update Downporter, the downporting process has been completely automated. Today, I am releasing the 1Click PS4 Batch Downporter. As the name suggests, it lets you downport multiple PKGs in one click.

Features
Disclaimer: I or Noob404 don't condone backups. This is purely an educational article. What you do with your PS4 is your responsibility. Continue at your own risk.

While this was specifically made to downport multiple PKGs, it will also work for just a single PKG.

Choose this option if your C drive doesn’t have enough free space. Using this option, during the PKG compilation process, the program will not use C drive at all. Instead, for temporary file keeping, the current folder will be used.

For eg:- you have the downporter in D:\\Noob404, then D: drive will be used. Follow these steps.
That’s it. The progressbar will be filled and status information bar will inform you when the downporting has been completed. You will get the Downported Update PKG(s) in the Output folder.

I hope you like my programs. If you do and want to support me, donate at Ko-fi. 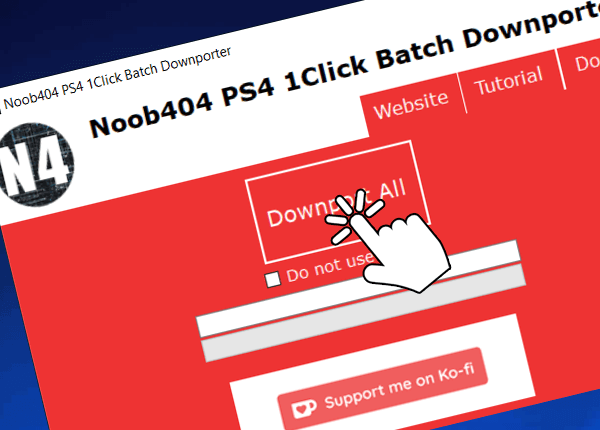 Staff Member
Moderator
Verified
The mirror on his blog for this app doesn't go to the correct file either, hopefully @noob404 will fix it and then we'll update the OP link also.

Senior Member
Contributor
Verified
dam bro, enough ads? i get it but seriously.. so i have to download a installer that wants you to install other stuff, then it tells you download has been interrupted..

Member
Contributor
Verified
can't download program at all due to ads
Please use alternate site, Mega would be great