Here we present you with a cool way to grab your IDPS/PSID on 4.83 OFW

On OFW 4.82 and lower, this tool could be installed by making an appropriate backup file but it isn't needed, the idps can already be dumped using the ps3xploit idps dumper tool.

On CFW, all 4.xx versions should be supported but this tool is only for devs wishing to dig further as there are better ways for users to retrieve the console id. For those curious of using it on CFW, please see end of this post for a package that can be installed.

This is essentially a PlayStation Store with ALL functionality removed! It has been modified to only display the Unique Console ID (IDPS & PSID) and nothing else.

YOUR HARD DRIVE WILL BE FORMATTED DURING THIS PROCESS! IT IS RECOMMENDED TO BACKUP/SYNC ANYTHING IMPORTANT BEFORE STARTING!

More advanced users may want to make a sector by sector copy of HDD prior to erase, get IDPS, and restore, to save time creating accounts, signing to SEN, restoring games, licenses, patches, cache, DLC etc (as suggested by Berion)

Prerequisites:
Instructions:
Once you have your Console ID, you can safely remove StoreHaxx and allow the PlayStation Store to again receive the normal app updates.

Thanks
Thank you to these testers:
JailBreak PS3 Slim 4.84 OFW With E3 Flasher To Rebug 4.82.2 CFW 2019
Cheers to @prabin for the heads-up on this PlayStation 3 scene news earlier today! 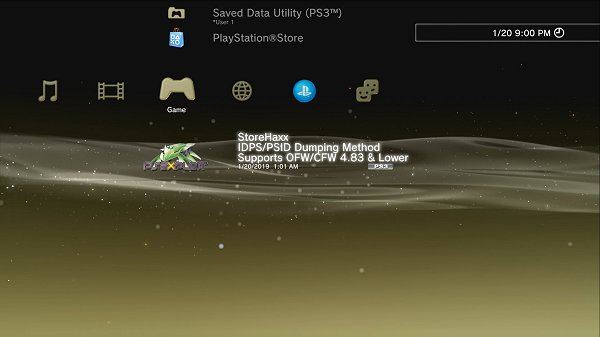 Developer
Senior Member
Contributor
Verified
Well this is deffers interesting (the concept, not the result). I used to just do it via the NOR itself. I even made a program to mass dump every ID from every dump I ever had. Lucky I didn't care for playing online (or for being an ahole), who knows what I could have done!

Developer
Senior Member
Contributor
Verified
the psn has been replaced through the image loading method, it is an old psn mod.pkg that when loading the images in cache reveals through a jap rop chain the load of the old idps exploit, this method maybe JavaScript ROP could mod to modify xml and load HAN. good job.

Member
Contributor
Verified
thank you for that