To quote from the README.md: PS4 4.0x Code Execution

The commenting and reorganization was mostly for my own learning experience, however hopefully others can find these comments helpful and build on them or even fix them if I've made mistakes. The exploit is much more stable than FireKaku and sets up the foundation for running basic ROP chains and returns to normal execution. Credit for the exploit goes completely to qwertyoruiopz.

Simply setup a web-server on localhost using xampp or any other program and setup these files in a directory. You can then go to your computer's local IPv4 address (found by running ipconfig in cmd.exe) and access the exploit.

qwertyoruiopz - The original exploit, the likes of which can be found here. 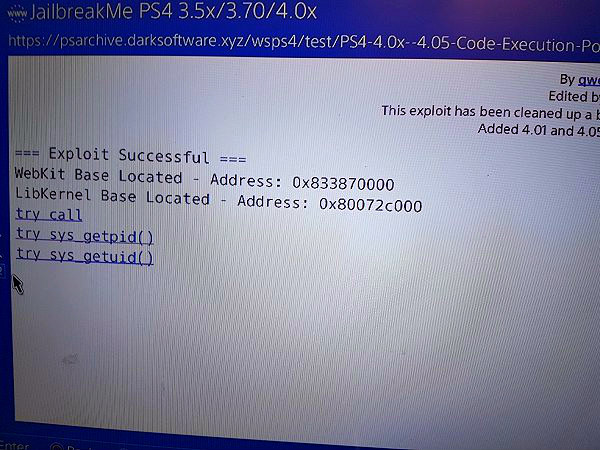 Senior Member
Contributor
Verified
So how do we run a Kexploit??

Nirav Patel said:
So how do we run a Kexploit??
Click to expand...

F0F shared the bug, now someone has to code the kexploit (using that 4.05 webkit exploit)

Member
Contributor
When will there be a 4.70 and up one?

that's very appreciative of you

Senior Member
Contributor
@Centrino only stuff for the last FW would be interesting, so really @ll people had the possibility of using Fun Stuff without buy a new PS Crap Console with Lower FW if the updated already out of the round ...

Trojaner said:
@Centrino only stuff for the last FW would be interesting, so really @ll people had the possibility of using Fun Stuff without buy a new PS Crap Console with Lower FW if the updated already out of the round ...
Click to expand...

We'll always been told keep yours PS4 on lowest firmwares as possible if you want a jailbreak, don't moan and complain because you updated to latest and nothing is getting released.

Senior Member
Contributor
Nester ... ---> @ll People, there are enough who made the mistake and updated <--- ... i personally follow my own way, always on last FW, always online, always Bet Testing FW, i don´t need backups on PS4, have only 100% Exclusives and that will not change, the rest is PC