Today I release in open source my software Alpha Project for Black Ops 3. This is the most complete tool for PS3 for this games.

You can edit all the statistics for multiplayer and zombie.
More pictures and information : http://mrniato.com/alpha.php 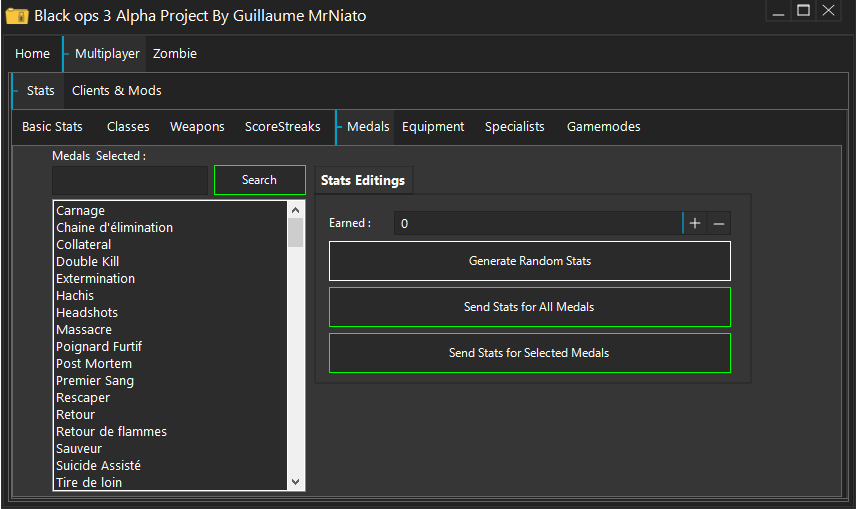 Staff Member
Moderator
Verified
Cheers for sharing this PS3 project with everyone @MrNiato, and I've added it to the main page also now.

Senior Member
Contributor
ive used your tools via next gen update in the past ...but no disrespect but every tool ive used of mr niatos i just get banned so avoid using his tools

Senior Member
Contributor
i haven't been able to play bo3 once without getting banned within an hour or two, with or without mods.

Member
Contributor
Is it possible to use this without getting banned?

Member
Contributor
Verified
Had more than 100 hours in BO3 (got to 55 level) and never got any ban. Well, i just got one ban and was from Destiny but was my fault (account ban from their server not PSN), using DLC's and all. Never got IDPS ban. For eg. i don't mess with stats, never used mods like aimbots and so... When i tried some mods was just like no recoil and UAV. Never used redboxes in any COD game.

I know AW and BO3 are harder to use mods cause of their protection system, but never used mods in any of these 2 and i never got banned when i used to play AW or BO3. So i dunno what or why are people being banned for. I used only PSNPatch (always latest version) to disable CFW syscalls and clear the logs. That's about it. So far, never got bans (and i played alot of GTA V, BF3, BF4, COD MW, MW2, MW3, BO, BO1 and GHOSTS, plus others like DESTINY).

Oh btw, i changed my mac/idps since day one (in 3.55) so if i got a ban, i wouldn't lose the original MAC and IDPS (you know, if i planned to sell the console to someone i could restore it to its original state if the person didn't wanted the PS3 modded). But since i never got any ban...so it's all good and still the same system since 2009 (2k slim) and i do have other 2 ps3's (the original model and a 3k)!

I do not encourage people to cheat or use mods online cause i personaly don't like, but for fun with friends in a close lobby thats ok. There's modders and "modders" (those that do it for fun and others for pride or showing off). The ones that just like to show off or do crazy stuff to legit players deserve a good old ban... That's why i like the PS4 multiplayer like it is

This some off topic, but just to clarify that not all people get a instant ban playing on a modded system online, if you do know what you are doing and if you know what you don't need to do. There's no science behind the ban's. Some might say people are lucky that they never got a ban others that never got a ban will say, well i never cheated in a game nor used mods, cause i just like to play the games with friends and what's not.

But even when using tools or apps or plugins to disable cfw syscalls or clearing logs the ban is always present, cause when going online with a exploited system the risk is always there and it the ban can happen at any time sooner or later. The bans are straight forward, if you are caught using unsigned code you are banned (when logged into PSN you use some homebrew or whatsoever), if you are caught or flagged using RTM tools or mods you are flagged for a ban and so on... that's about it (simple words)!

Member
Contributor
We are referring to bans from Black Ops 3, not the PSN servers, pretty sure everyone has that covered. BO3 will instaban you for using tools like this online, I have never found a proper ban bypass/anti-ban eboot for BO3.

This is something that has been mastered in the Xbox360 mod scene. With services like NiNJA, you can mod any COD game without worrying about being banned. Can't seem to find anything that works on PS3 for BO2 or BO3.

Member
Contributor
Verified
Yeah i know. Like i got from DESTINY, was a account ban from their server not PSN. The account is still OK till this day. I was banned from their server by installing some DLC content and some other extras at that time (think like 3 years ago or more) like i already wrote, as for BO3 never got a ban playing it normally.

As for RTM TOOLS or sprx's i don't use them for that game. So i dunno how their system works, but they must have some regular updates on their platform. And why people use tools or mods on xbox 360 without bans might be some bypass that the stealth servers use while on PSN that isn't possible (dunno, just thinking).

Tbh i only used mods mainly for GTA V cause it's fun, while on COD is a bit cheating only (unless for recoveries, that's also cheating the progress like some shortcut), i guess (well on BO2 we had some cool stuff). Don't wanna go off topic, cause each person choose if they want to use mods or not, but this some of my points of view. And if they choose to use and end up being banned, well, that's their fault!!

Also while i played BO2 on PS3 never got a ban even using some mods for recoveries for me and some friends (sprx or some rtm tools). Dunno how it's now, cause i don't play BO2 since late 2015/early 2016 at least, things might have changed since then.
You must log in or register to reply here.
Share:
Facebook Twitter Reddit Email Share Link