To quote from LizZo via @dodero4 at CyberModding.it on this latest release, roughly translated: Release - Custom Firmware FERROX 4.82 v1.01 COBRA 7.55

Here is the new release we promised you! The new v1.01 of the FERROX COBRA comes with general improvements, both internal to FERROX and COBRA. In fact, the dear Developer Alexander includes in its Custom Firmware the COBRA Payloads updated to the new 7.55 version.

The new COBRA version solves a Bug created with the addition of the Homebrew Blocker. We had initially discovered the Bug of the game data installation during the last tests on the FERROX 4.82. We discovered another one during the FERROX tests.

The problem is access to storage space after disabling the Syscalls. It did not allow to erase game data and also applications / homebrew, and perhaps also other related issues. No access to the installation folder was allowed with Syscalls disabled.

After just a few tests, we can ascertain that the problem has been solved. For complete changelogs, you can view them below:

Enter Recovery:
In Recovery:
For a clean installation, you can install the CFW twice. You can also go back to Recovery and choose the Options to Rebuild the Database and Restore the File System. This way you will have a more than clean and safe installation.

TESTS MADE:
Try out many PS3, PS2, PSP and PSX games, in all formats. Some of the games tried in the spoiler.

As always, the sources of the Developer @Alexanderss will soon be available in his Github. You will find then the 7.55 version of the COBRA with the correction described. 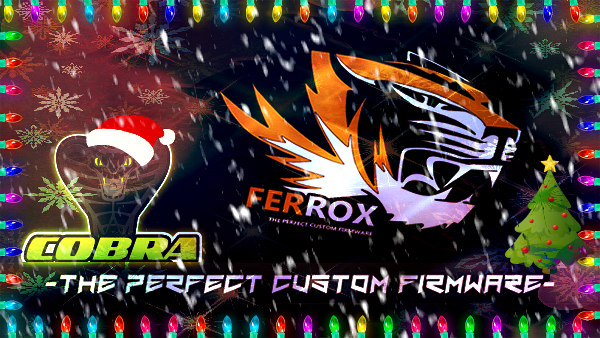 Senior Member
Contributor
Nice, was waiting for this fix, thanks ALEXANDER and collaborators.
Now go for the NOBD and NOBT versions.

Developer
Contributor
no bd version will be released tomorrow. We slid the release of a week, because we wanted to integrate the cobra 755 patches there too.

Senior Member
Contributor
Could you post a mirror to the cfw?
Mega its impossible these days.
Thanks.

Staff Member
Moderator
Verified
I added a mirror to the OP for it now.

Developer
Senior Member
Contributor
Note: CCAPI has not been updated to support this firmware or rebugs new firmware.

Contributor
Looking to just play my ISO backups, should i use this CFW or rebug 4.82.1?

(imma newb to the ps3 scene, but have had many other consoles, so im not completly knowledness lol)

Member
Contributor
I've always had a problem figuring out which CFW is best every time there is an update. I'm with huffymybrd in asking if this is overall a better choice?

Contributor
I will try and see how good it is.

mallrats said:
I've always had a problem figuring out which CFW is best every time there is an update. I'm with huffymybrd in asking if this is overall a better choice?
Click to expand...