According to Figburn who gave it a test run in the demo video below, to quote: "there's some mechanics I didn't even get to show in the video (dodging, locking on, limit moves like omnislash) but rest assured they're all in there!"

Those interested can grab Dreams Creator Early Access by Media Molecule for $29.99 to make games, music, movies, art and more with the Dreams creator tools on PlayStation 4. 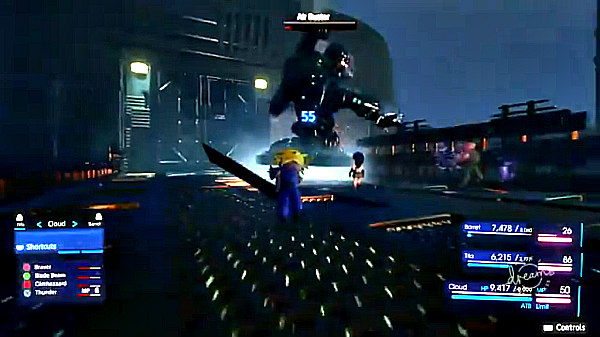 Senior Member
Contributor
Looks very promising indeed, if the characters looks like this it will be perfect

Senior Member
Contributor
With all due respect "pun fully intended" let's try to get real here (and try to be humble) a fan who thinks he's a better video game maker than some of the industry most iconic figures who at least got 40 years of experience and practice.

I watched the video and this looks like a water-downed version of World of Final Fnatasy with FFVII theme. But again according to the creator's logic, what we always wanted is the exact same looking game just like the remake, but with dated graphics and tiny little characters with giants heads ...please!

Before you jump to insult and attack my comment for allowing myself to have an opinion (god forbid), remember this is my take on what i've just saw, i don't know the guy and i admire him for all the efforts and all that, but again, i'm a very old gamer who believe that the FF fanbase is the most split and most obnoxious fan base of all time, SE is one of those "few" rare respectful video game dev who still give a damn about gaming (unlike EA, Bethesda, Konami and many other overrated mediocre devs who's only interested in milking your pocket for a cheap).

The guys at SE are willing to spend tons of gill and risk it just to push the limits, working for years on one installment just to push the boundaries and SURVIVE in such an unbelievably harsh fast growing industry ruined by man-child kind of gamers.

By repeating the same formula the old nostalgic fans craves it means they'll be just milking the title along with your wallet, YOU STILL GOT THE ORIGINAL game to play, and please remember fans were begging for years for a remake but SE refused multiple times, but when they finally agreed ....ALL GUNS BLAZING (why would you ever want to please such a crazy split fanbase to begin with?) but they're still trying and instead they're willing to gamble to help push the industry to evolve and grow, and please do remember that the original FFVII game was a product of DEFYING the rules by bringing something totally different and fresh, and here we are years later watching those same old angry fans describing FFVII as the MOST ICONIC RPG of all time... same old fans who attacked and complained about that very same game for being too damn confusing. yes, i was there!

I still got the original game and i can revisit whenever i feel a bit nostalgic, but why would i ever want to play a clone with a slightly updated graphics? still not the same game anyway, i'm all for the new totally fresh experience.

You have a different take and opinion? cool, I respect that, you post it down below just don't quote or tag me to insult... your opinion is yours to state don't attack mine. ..i've been doing it for years and i know where this going ..OH LOOK SOMEONE WHO LIKES FF GAMES RELEASED AFTER FFX ...ATTACK! lol

Senior Member
Contributor
@GamerX2 all you said is true, in 2019 compared to the old retro FFVII this is definitely out of the league even without even glance on it come on dude its over 23 years and you still used the same old graphics theme, old polygons and today computing is able to process 3d graphics like real for the minimum you can use daz3d for free and create your own FFVII character by using those 3d program

Senior Member
Contributor
@mukasange I'm sure he did a great job, but i'm just against the whole intended pun and overall generalization.

He came out a bit cocky if anything, and that doesn't apply on many old folks who played and loved the original (which also gave the old fans such a bad ageist name) but we're still looking up for the new changes with an open welcoming mind. It's just nostolgia fanboys are the worst they gave SE such a hard time for no reason, they speared misleading false info, crap such as:

Sakaguchi is the CREATOR of FF ..FALSE... the FF franchise was always the work of a team a huge team, he was "barely" involved with few titles but he was more like a producer than a writer or a director.

Sakaguchi is the Creator of FFX... again FALSE, it's unfair to overlook the names of those three awesome people who directed and wrote the game to give credits to someone else.

Sakaguchi left SE because he had it with their BS,... FALSE, Sakaguchi left before SE was even formed, if anything he was an ahole who almost cost his colleges thier jobs, SE saved the entire team and kept them on the job.

Square Soft was amazing. the new guys at SE sucks ruined the franchise again false! they're the exact same people who worked on ever iconic FF and Trigger games. Same exact people it's just the capital is now owned but a different person that's all and that person is the one who saved thier legacy and the FF series.

Sakaguchi betrayed both the fans and his team but yet he's worshipped by ignorant idiots, the guy left to work for MS then Nintendo and FAILED miserably, and those three lonely titles he created since he left Soft has the record for the lowest selling titles, but again was was treated like a god by nostalgia fanboys, and not just that BUT he never ever was interested in correcting his interviewers about the misleading piece of info about him being the creator of FFX

This is just a tip of the iceberg, the old fanbase tried (and failed) to destroy one of the best team of developers, and still complaining about almost anything while praising crappy poorly made titles created by other companies.

I've been doing it since the early 80s, watched the industry grow, witnessed the fall of some of the oldest pillars of the industry giants, and here we are in 2019 and the guys are standing still, creating some of the most creative titles, building one of the most powerful gaming engines,and still pushing whilst trying to balance things out and STILL (i don't know why) trying to please the minority of their old extremist-fanbase.