How to Host PS4HEN for 4.05 on Wifi USB Drive Guide by Stooged

PS4 Guides and Tutorials       Thread starter stooged       Start date Feb 9, 2018 at 3:33 AM       121
Recently there has been a few threads that allow people to run the PS4HEN from things like Android or Rasberry PI and it came to mind the same thing can be done with little effort from a wifi usb stick.

So here is a bit of info on that... the wifi stick i used was a 16gb Connect Wireless Stick and you will need PS4-HEN-VTX.

Just plug the usb stick into your pc and copy the exploit folder from the PS4-HEN-VTX (master.zip) archive to the root of the drive.

Unplug the usb stick from the pc as it will not serve files over wifi while it is plugged into the usb port.

The wifi usb stick has its own battery and you can turn it off an on pressing a button on the side of it. turn it on, a light will flash on it to indicate that it is on.

Goto the PS4 wifi network settings and look for the SanDisk Connect XXXXX ssid and setup the connection using the auto settings, there is no need to set dns and stuff.

Once the ps4 is connected to the wifi stick open the WWW broswer and goto http://172.25.63.1/ and you should have the list of files on the stick.

You can then go into the exploit folder and select index.html and it will launch the exploit.

You can also make a bookmark to http://172.25.63.1/myconnect/exploit/index.html and it will launch the exploit straight from the bookmark 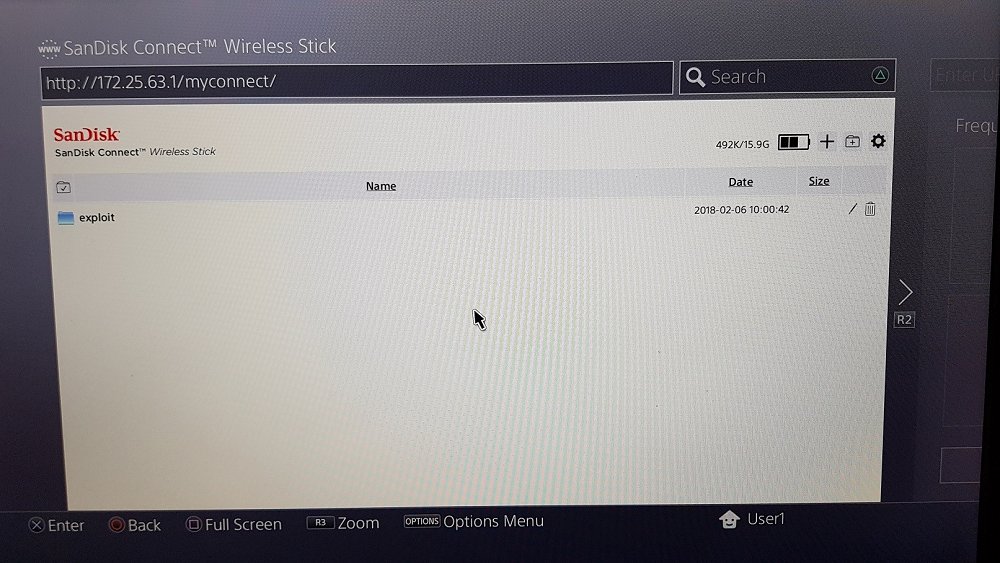 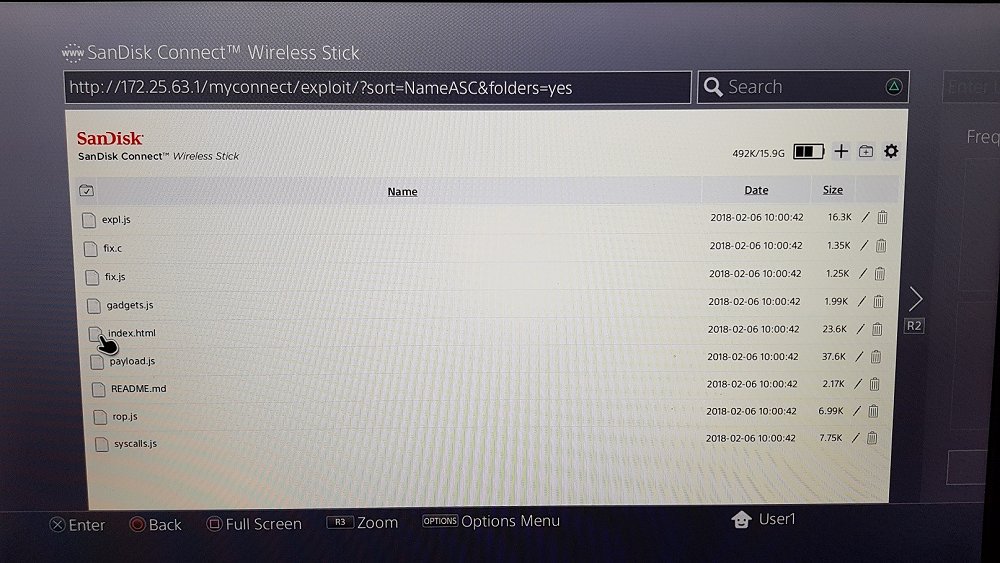 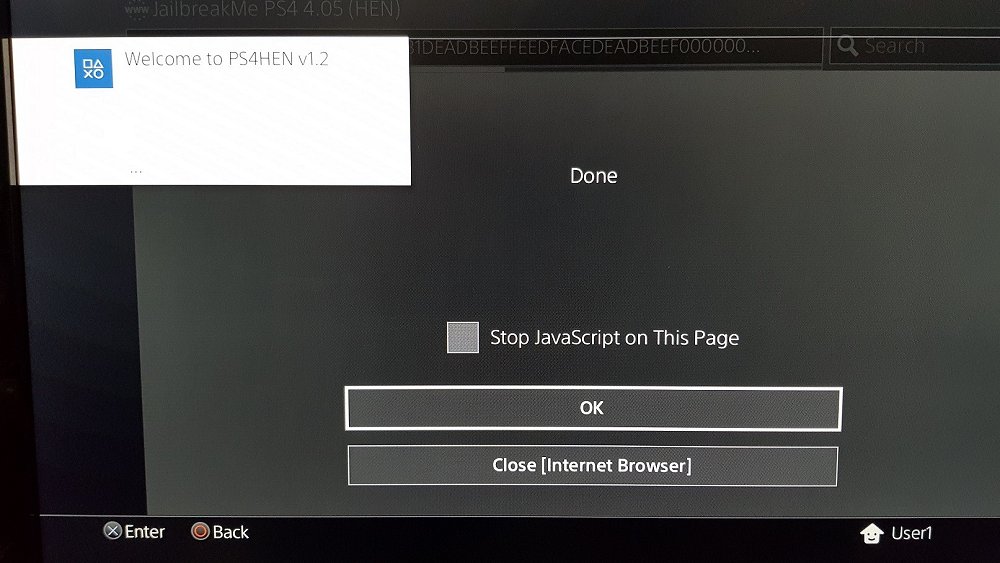 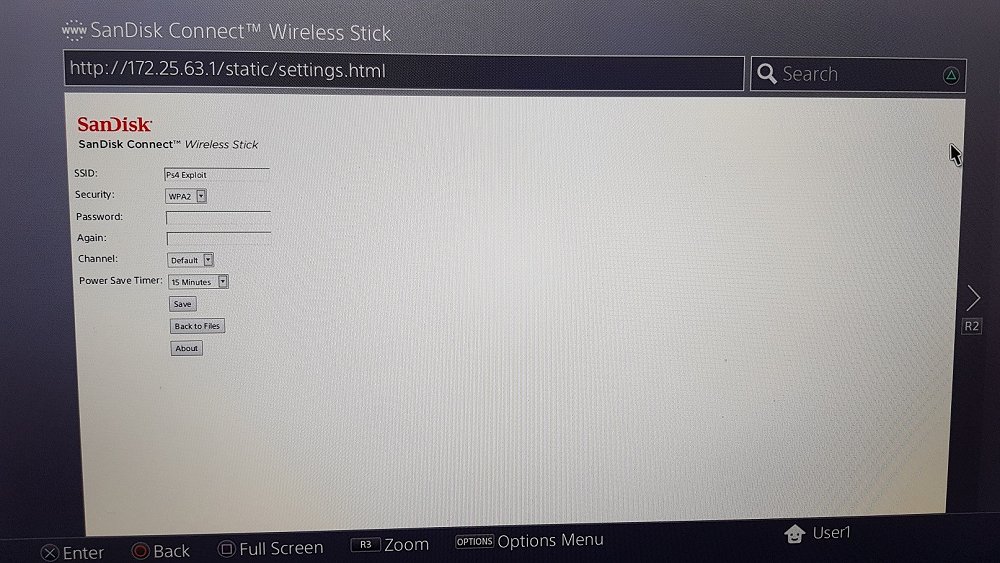 Developer
Senior Member
Contributor
Verified
I was only mentioning as an example as I'm not sure and using lower fw. I think he just had that flash drive and specified as what he used don't think restricted to that.

Senior Member
Contributor
Finally! something i have lying in my drawer, hardly used it cos of the small size and slow transfer speed. i am also using the 16gb. haha. but can not be used to host this for the ps4. i think this might be better option compared to the RPI. gonna try out later .

Developer
Senior Member
Contributor
Verified
I have 3.0 16GB usb sticks that work faster then sansdisk that's y I avoid them. don't get me wrong they work for some things but when your using as boot drives it don't cut it using slow

Member
Contributor
Seems that this is close to be possible to modesm with a usb port, that a very good idea.

Developer
Senior Member
Contributor
Verified
if you actualy read between his lines and know the system uses wifi alone it's already there. what he didn't state was how the drive actualy works cause it stores access if you read the link above

Senior Member
Contributor
Verified
I am not sure I understand, @Chaos Kid

You mean I can use non-wifi usb flash drive anyway?

Chaos Kid said:
I have 3.0 16GB usb sticks that work faster then sansdisk that's y I avoid them. don't get me wrong they work for some things but when your using as boot drives it don't cut it using slow
Click to expand...

Yeah i know. i bought it cos its cheap, and was curious at first. but it is bad. but Wifi HDD is still faster, but nothing beats USB 3 direct connections


orioland said:
Seems that this is close to be possible to modesm with a usb port, that a very good idea.

Perhaps can just leave it plug into the usb port on ps4, just to power the usb up? incase of low battery. so feels almost like a usb plug in version like the ps3 early scene days with a teensy board or e3 stick that can carry around to friends house with a compatible ps4 firmware.

Member
Contributor
I've been using this PS4HEN version with my OpenWRT router. Replace User's Guide with it using uhttpd and dnsmasq to fake User's Guide page then you will load the exploit instead. I think it's the easiest way to load PS4HEN.
You must log in or register to reply here.
Share:
Facebook Twitter Reddit Email Share Link