Category PS5 News       Thread starter PSXHAX       Start date Oct 10, 2019 at 2:36 AM       1,414       3
Last week we caught wind of potential PS5 AI Voice Assistance functionality after a Sony patent for PlayStation Assistant was spotted, and recently another patent (sony-ps5-vr-headset.pdf followed by sony-playstation-vr-system.pdf for a Telepresence System) surfaced via LetsGoDigital.org hinting at rumors of a Next-Gen PlayStation VR (PS VR2) for PlayStation 5.

A related patent can be found on the USPTO site, and below is a summary of the patent from Eurogamer.net to quote: "Images show plans for a PSVR headset which includes two front and one rear cameras. A further camera is included on a PlayStation Move-style controller.

These headset cameras are in addition to the LEDs installed around the current unit. A microphone will again be included. There's also the option for a further, separate camera to track the user's movements - like the PlayStation Camera or Kinect.

Most excitingly, perhaps, is the mention the headset could be operated wirelessly, with data sent and received by Bluetooth. This would mean the unit also includes its own power supply.

One final point is the ability for the headset to show a 'transparent' view - made possible by those front-facing cameras - so you could see your surroundings through the screen.

Images from both of these cameras can be displayed at the same time, one per eye, producing a stereoscopic 3D effect. Alternatively, they could be used to overlay AR effects on your real-world surroundings." 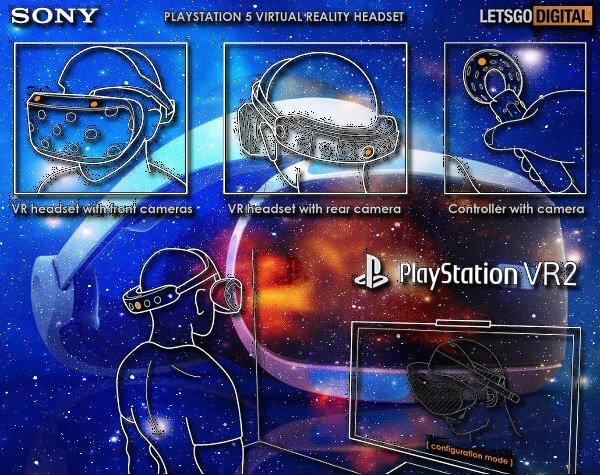 Senior Member
Contributor
Verified
I hope not. Other huge headset ? That's why I didn't purchased PS4 headset because it was huge and UGLY design!! Come on! Make a mini headset instead. SMH!

Senior Member
Contributor
is it still use dildothing to make it move? please make a better controller i don't want to turn into a gay by wearing those silly stuff

Member
Contributor
Verified
Will it work on ps4?
You must log in or register to reply here.
Share:
Facebook Twitter Reddit Email Link
Recent Articles
Installing PS4 Gentoo Linux on PlayStation 4 Guide by Mircoho
After the recent PS4 Gentoo Kernel Sources 5.3.7 with Baikal Chip Patches, here is a guide by me (@mircohoooo) covering how to install Gentoo Linux on PlayStation 4 and turn your PS4 into an...
PKGEditor for PS4 Updated by Maxton with EKPFS / XTS Key Support
Since yesterday's PS4 PKG Backporting updates PlayStation 4 scene developer maxton of Maxton.xyz announced on Twitter that he updated the LibOrbisPkg PkgEditor adding support for EKPFS / XTS keys...
PlayStation Store Kicks Off 2020 with PSN Games Under $20 at PS Store
The first PlayStation Store flash sale of 2020 is here and Sony is kicking things off with a two-week long PSN Games Under $20 promotion featuring discounts of up to 50% select titles including...
PS4 BCP Method Backporting PlayStation 4 PKGs Outline & PKGEditor Updates
Lately there's been a surge of PS4 Game PKG's normally requiring higher Firmware that PlayStation 4 scene developers have been able to 'backport' to work on lower Firmware including Jailbroken PS4...