Proceeding the Streets Of Rage PS4 Mod PKG, OpenBOR PS2 for PS4 PKG Ports and OpenBOR for PS4 Demo today developer @Markus95 (aka @Kus00095) shared on Twitter a native OPENBOR.pkg version of the OpenBOR port forked by Znullptr (aka dmiller423) who has both a Github Sponsors Page and a Patreon Page set up for supporters.

Here are further details alongside a demonstration video from Logic-Sunrise.com, roughly translated:

As I announced it to you some time ago, Znullptr, that one does not present any more so much it contributed to the scene homebrews PS4 with its many emulators, developed for our PS4, the famous engine OpenBOR.

As a reminder, OpenBOR is a customizable game engine, allowing you to create new games. The games developed for the Beats of Rage engine are commonly called "mods", the creators "modders", and the engine itself is commonly referred to as "modifiable".

Beats of Rage has become so popular due to the ability to personalize the engine that it has become the model of personalization engines for video game consoles.

Here is the PS4 version developed by Znullptr, the latter kindly shared the .elf with me, so I have, as usual, created the FPKG so that as many people as possible can take advantage of it, without having to compile this Fake PKG themselves.

The screen resolution will depend on the mod selected and will automatically adjust to the resolution desired by the dev of the mod in question.

In addition I added to the archive present in this new, a small mod of my design: Alien (already published on Switch).

You will need to copy / paste the mods by FTP to the hard drive of the PS4, in the data / openbor / paks / ... folder so that OpenBOR can execute them. You can copy / paste as many mods as you want, the famous selection menu is present in this homebrew as every time with Znullptr.

A big thank you to Znullptr without whom the Homebrew / PS4 emulator scene will be breathless, or even nonexistent, for all those who also want to thank him do not hesitate to make a donation on his Patreon at this address: https://www.patreon.com/znullptr. 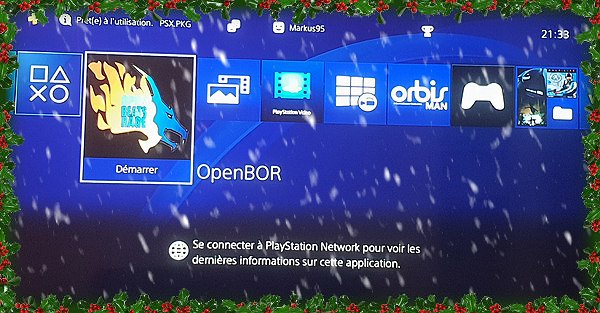 Senior Member
Contributor
Verified
Wow! Been really wanting this for a while but figured it would be a much later addition, if at all.

Member
Contributor
Ohh now I understand what OpenBor is! Thanks for this post.