To quote from the README.md: EBOOT.BIN-ELF-Patcher

This is for the PS4, This allows you to patch Skyrim Special Edition and Fallout 4 to look for "mods.txt", it could also be used to add your own custom patches as long as you have offsets and are willing to do so.

Side notes, ESM must be first ESP 2nd and ESL 3rd. For a example i'll show you what it should look like this: 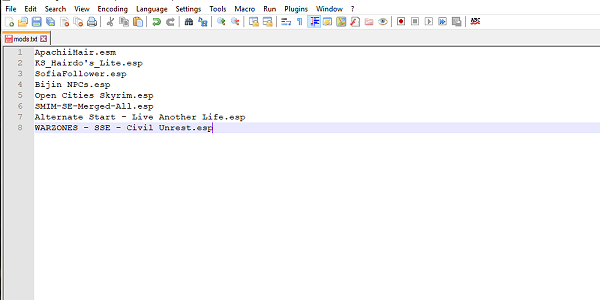 Cheers to @Wultra for sharing the news tip on Twitter earlier today!
How To Generate FNIS Behavior For PS4 For Skyrim 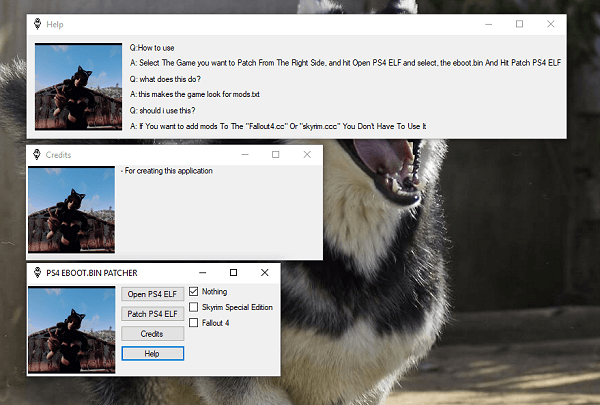 Developer
Senior Member
Contributor
Verified
i'll likely be creating an proper video on converting mods that will be up-to-date and whatnot.

Member
Contributor
Verified
Hey Backporter, nice work. Up to this point I was adding mods to Skyrim by editing the Skyrim.ini [sTestFileX=example.esp] using the tutorial that Modded Warfare released on Youtube. It would be great to use your tool to overcome the limit of esps one can use [sTestFile10 is the limit]. But I can't get mods.txt to work.

So I have some simple questions:

2. In which directory do I have to put the mods.txt in? Where the bin is? Data folder?

It would be really helpful to get more information about the process as not everybody is a technical expert.

Every help is welcome as I plan to release a modded update in the near future. It has SMIM, Noble textures, UNP body + textures, tons of other textures, exterior and interior lighting, weathers, grass , water, etc. It is still vanilla gameplay but true eye candy...

What could I achive with a working mods.txt and without the sTestFile limit...

Developer
Senior Member
Contributor
Verified
@Ryo This will not work on 1.00, you must dump one of the patches 1.07/8 or higher, the mods.txt would go right beside the ELF, there is no real need to release a pkg that has them mods installed, I've already converted them on the PS4 nexus so its as simple as a download and paste.

Grass and lighting weather mods can stress the game a lot, so you need to be absolutely sure that the game is stable, as I've told someone else, not doing so can lead to many issues, corrupted saves, same bloating, game instability, complete game unplayable. The same thing happenes on the PC version the difference is the PS4 version is a lot more sensitive, so you need to take a lot more care about it.

Also using Modded Warfare method of using the DDS is sub-optimal and flat-out causes game instability compared to using Sony's native textures ("GNF") it also makes the data folder to be messy, basically, get the game and dump the update yourself, i did, you can too.

Staff Member
Moderator
Senior Member
Verified
@Backporter Could it be patch 1.16 for CUSA05486 which i uploaded? And if not i can dump every for max 1.16 update. Want to use unp and some bikini armor replacer

Developer
Senior Member
Contributor
Verified
Use the patch version 1.09, I've converted UNPB (with physics and without) on the PS4 nexus its best if you use that one, for the bikini I can say that the Micro Bikini UUNP HDT here works and has physics if you convert it to SEE than again to the PS4, if you need help you can join my discord and I can help better there.

Staff Member
Moderator
Verified
I added your Discord link to the OP in case others are interested also.

Staff Member
Moderator
Senior Member
Verified
So when searching for new mods with armor its better to use it from PC Skyrim Special Edition or just Skyrim. I saw that on nexus your ports are based mainly from Skyrim Legendary Edition rather then Special Edition version. Need to configure discord to use it via tor network just for security protection

@Archi55
the PS4 nexus is for the PS4 version of the game (SSE) not the oldrim version, the bikini is from the oldrim meaning you need to convert it to SSE than the PS4 or wait till i can get permission from the author and upload it myself

Staff Member
Moderator
Senior Member
Verified
I searched for orbis-image2gnf.exe and libs which are requirments for you programs converter to use on mods files, and can't find it. Its says that its on PS4 ***. So searched it and downloaded it from CTurt github repository, learned how and menaged to compile that ***. Im on Ubuntu so thats wasnt problem, but its not there, so I'm stuck at the moment

Need to sleep with it tomorrow / today, next try