Recently the PS4 scene has been focusing on ESP8266 board methods including ESPHost, ESPS4ExploitServer and RetroGamerFirm while today PlayStation 4 developer @Al Azif announced on Twitter alongside the PS4 Exploit Host v0.4.2 release news of the latest PS4 modchip project for Webkit exploits tentatively known as The Gate... although with support for other devices including Nintendo Switch and PlayStation Vita planned it will likely be renamed soon he states.

Here's the full announcement complete with features from the Github update, to quote: Announcement

This project has been a little neglected since the 0.4.1 release almost a month ago as I've been working on another project since that release. I've haven't been hiding and posted a bit on Discord so this won't come as a surprise to some. It's a "modchip" for webkit exploits, mirroring the existing ESP8266 methods, just with more features/polish.

The device can either create a network to connect to (No internet access), connect to an existing network (Works just like this host), or create a bridge (Enabling internet access though the device). It's a custom PCB that's about 25mm*18mm*4mm (Currently) so it should fit inside most consoles. The front end looks like my regular exploit host and you can view a demo (out of date) of the control panel here.

It's currently in a working state, just using the API, with majority of the features are done (Currently the bluetooth controller & the admin panel HTML+JS are not 100%) and I'll be looking for testers (Bring your own board) within the next two week or so. Contact me on Twitter or Discord if your interested in testing.

To get one of the prototype boards soldering ability is a must. There are ~6 wires to solder, 2 of which being on the PS4 motherboard. I'll eat the cost for the prototypes.

When all is said and done I plan to open source all the code/PCB info so others can help further development/produce boards for others. I want to have it at a 1.0 state before releasing before having others make incompatible software/PCBs. 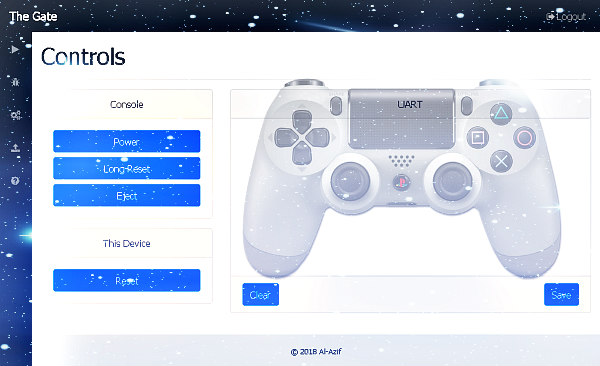 Senior Member
Contributor
This is interesting. Keep up the good work. Developer
Senior Member
Contributor
Verified
Good to see so many people working on the esp8266 now. Look forward to the release.

This is the real deal

Senior Member
Contributor
Verified
Your a bloody legend al azif crack a beer mate u deserve it. can't wait to test out this pcb and install it internally.

Member
Contributor
this not is a mod chip

Senior Member
Contributor
can you use something like that?