PlayStation 4 developer @DimosGsxR let us know he'd like to share his UnFSelf Windows application to convert PS4 FSELF files back to ELF files by simply dragging and dropping the FSELF file on UnfSelf.exe to get the resulting ELF file with "-decrypted" added to the filename.

For those curious the Greek sentence in the prompt roughly translated states "Please enter the location of the file:" which isn't necessary if you drag and drop it, however, like me you may need to install Microsoft Visual C++ 2015 Redistributable Update 3 RC to run it.

Here's more details from his email earlier today, to quote: Guys I have made a tool to convert FSELF back to ELF. That will be useful for PS4 <5.05 to unself FSELF and lower firmware on games.

I tested and confirmed the ELF file from my program is same with dumped ELF from PS4 dumped payload.

The program is simple, no UI just drag n drop FSELF file on program and you get same name file with "-decrypted" ELF file.

You can drag multiple files at same time but need all files to be FSELF else the program is close. Just try yourself to be sure. I am not a pro development just learning C++.

I made that because I didn't want to upgrade 4.55-> 5.05, but because no one shared the ELF file from games to patch it lowering FW. Nevermind now I am on 5.05 but that will be useful for those guys who haven't upgrade.

Try it and check if decrypted FSELF files from that program is equal with PS4dump payload ELF files (all test I have done it's equal).

I hope that will be useful for someone. As I say before I just beginner C++ programmer. 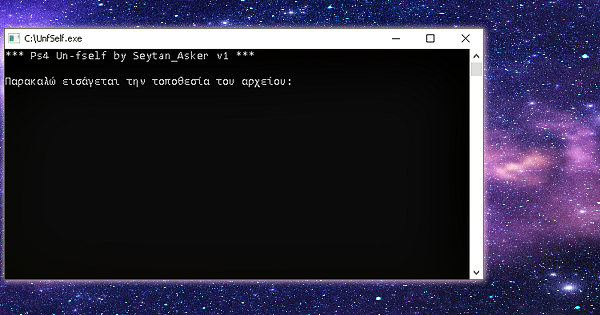 Senior Member
Contributor
Fantastic work only if something like this was feasable for the upcoming higherfirmware games above 5.05....

Great app none the less , those on 4.05 are worshiping you this very moment now gow and others they've missed out on can be played

Senior Member
Contributor
Verified
now we need games above 5.05 to be dumped

Member
Contributor
Verified
Oh my!!! That was unexpected.... at least for me. Thank you for sharing sir.

Member
Contributor
Would this be usable for games requiring 5.55 to run on a 5.05 and lower?

Senior Member
Contributor
Verified
I wonder the same as #8
Greetings.

Developer
Senior Member
Contributor
Verified
@FakeJailbreak There is a guide how to lower game required firmware:
@RobHood19 Only if games is already dumped.

That tool is for those ps4 with <5.05 fw and cannot play newer games. Just extract fake pkg get eboot.bin & prx files drag n drop on tool get decrypted files patch it and replace the original (rename it first). Rebuild pkg (may also need to patch param.sfo) and install pkg.