PS5 News       Thread starter PSXHAX       Start date Aug 3, 2021 at 2:02 AM       2,608       18
Despite partnering with Burger King for the PS5 UI Startup Sound Teaser last fall prior to the PlayStation 5 Launch, it appears McDonald's (aka Macca's) in Australia won't be giving away 50 customized McDonald's PS5 DualSense Controllers as Sony officially put the kibosh on the 50th birthday stream week event.

To quote from Press-Start.com.au: “Unfortunately, McDonald’s stream week has been postponed and won’t be going ahead this Sunday. We are unable to confirm a new date for the proposed event at this time. We will have some great prizing including Macca’s 50th Birthday Hoodies and 50 channel subscriptions for each streamer to give away. We will be in contact with the new timing as soon as we have it confirmed.”

“Sony PlayStation has not authorized the use of its controller in promotional materials related to the proposed Stream Week event and we apologize for any inconvenience caused. McDonald’s stream week has been postponed and Sony PlayStation controllers will not be included in the giveaway.”

According to IGN.com's update on the PS5 McDualSense Controller, to quote:

“As it turns out, the McDonald's PlayStation 5 DualSense controller was never actually meant to be advertised in the first place. IGN has learned that the design was an internal concept that never left the planning phase, let alone something McDonald's approached PlayStation about.”

McDonald's: You deserve a jailbreak today!​ 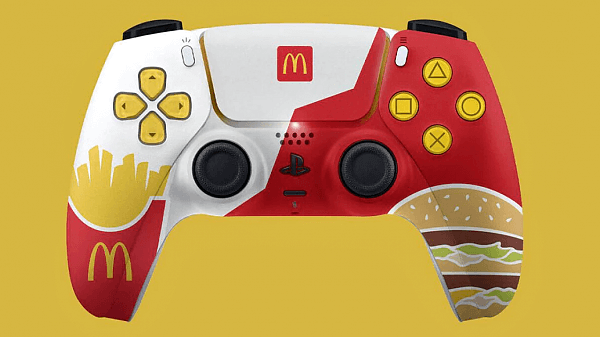 Hit the spoiler below for details, and cheers to @zecoxao on Twitter for the heads-up on this!

Senior Member
Contributor
Verified
Ugly! And I dont supported Mcdonald's. Bad healthy and they pay low to an employers. THUMB DOWN!

Developer
Senior Member
Contributor
Verified
I love big macs but no thanks for the controller. Its a funny prop tho lol

Senior Member
Contributor
Verified
What a joke, You can do better S$NY.

Member
Contributor
Verified
I like the controller, if I had a Ps5 I would have this alongside the standard one, but burger-wise there are better burgers out there compared to Mac.

Maybe Wendy's should come up with a controller coz their bacon burgers are awesome, everything tastes better with bacon.

Senior Member
Contributor
Verified
Mcdonald's and Burger King's fake burgers are gross and there are no nutrition in it at all. DISGUSTING! The French fries... My gosh. A frozen French fries and fry them in disgusting oil. It didn't taste like real potatoes at homemade. That's why it make people sick such a high cholesterol and high blood pressure. YUCK! I want them to shut down forever.

Staff Member
Moderator
Verified
My favorite burger and fresh cut fries is Five Guys, not for those counting calories though:

Senior Member
Contributor
Verified
@PSXHAX
I ate it twice for a long time ago. I dont liked the buns breads though, but I totally agreed with you that those taste are way better than Mcdonald's and Burger King!